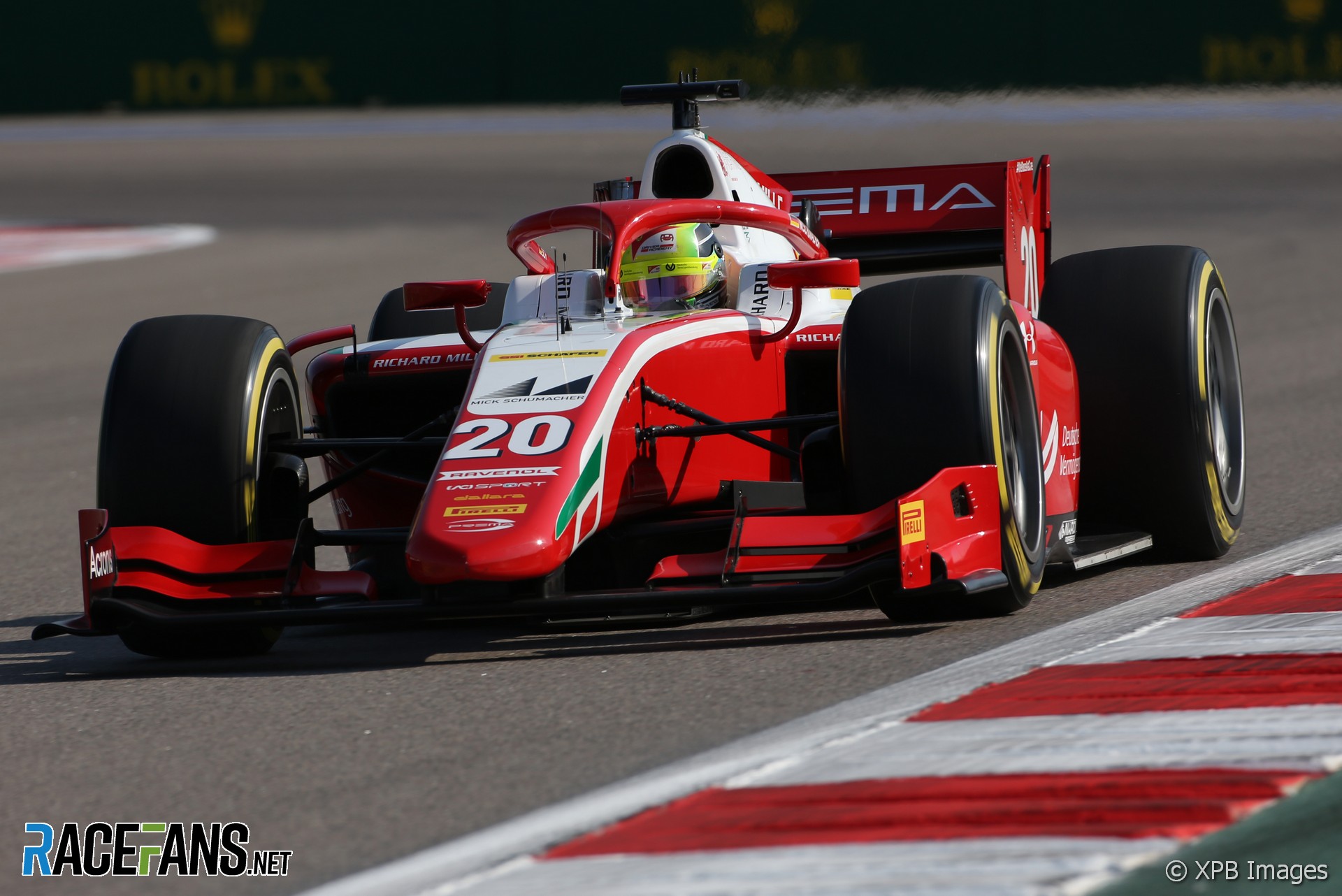 Mick Schumacher extended his Formula 2 championship lead over Callum Ilott after a decisive win from third on the grid in the Sochi feature race.

Red Bull and Honda junior Yuki Tsunoda had taken pole, his third of the season, after narrowly beating Carlin team mate Jehan Daruvala by six-thousandths of a second. Schumacher headed championship rival Ilott on the second row of the grid.

The preferred strategy for the feature race seemed to be starting on the super-soft compound tyres, then pitting early for mediums. Friday’s qualifying session indicated the new-for-2020 larger F2 wheel rims were making the super-soft last much longer than in previous years.

Tsunoda got away in the lead at the start while Schumacher made another of his characteristically good starts and passed Daruvala for second before turn one. Approaching turn two, however, chaos broke out. A multi-car incident involved several of the midfield drivers and eliminated four drivers.

They included Juri Vips, who scored his first podium in F2 in Mugello, after standing in for injured Sean Gelael at DAMS during the second half of this season, ended up facing the wrong way on track. Christian Lundgaard, third in the championship and having started the race sixth, also stopped on track and was out of the race.

Roy Nissany and Felipe Drugovich both made it back to the pits, but no further, and Charouz team mates Louis Deletraz and Pedro Piquet had to pit for repairs, although were able to continue.

Formula 2 forbids tyre-warming blankets, so drivers were just getting their tyres up to temperature, following the formation lap, when the race was neutralised. That might go some way to explain the subsequent slightly strange behaviour of the cars that started on super-soft tyres, which were unable to pit to change them before lap six, per the regulations.

When the Safety Car came in on lap three, Tsunoda was able to hold onto his lead. But he immediately came under pressure from Schumacher and, after Carlin pitted team mate Daruvala, Ilott joined the pair. All three managed to keep the tyres alive until lap nine but with increasingly poor times compared to the cars that had started on the medium compound, keeping the pack close.

Tsunoda emerged from his mandatory stop still with the net lead of the race, followed by Schumacher and Ilott. But they were now in the thick of the midfield. After just a few laps, Tsunoda was unable to make much headway or get cars between himself and Schumacher to his advantage, instead ending up bunched behind the drivers yet to pit.

Of the cars that had started on medium tyres, Jack Aitken and Guanyu Zhou had a back-and-forth for the lead but with both ultimately still yet to pit and the leaders gaining on them, it ended up being costly to them drawing out a lead over the cars on the ‘regular’ strategy.

By the time those on the ‘alternate’ strategy cars, pitted from around lap 19, Schumacher was a clear threat to Tsunoda. Rounding turn two Tsunoda covered the inside, but Schumacher teed him up nicely for a pass on the outside of the corner exit.

Ilott was also able to pass Tsunoda, who’d over-used tyres battling to get through the pack ahead of them both. But the Red Bull junior driver didn’t give up the fight easily. He kept Ilott within range and re-passed him for second on the final lap at turn two.

The move put Ilott onto the marbles on the outside of the corner, handing an opportunity to fourth-placed Luca Ghiotto, who eyes a late promotion to the podium. But Ilott covered him off around the final lap, and as they accelerated out of the final corner, denied his rival in a photo-finish, just two-hundredths of a second separating the pair.

By then Mick Schumacher had drawn out an impressive five-and-a-half second lead to cement his second victory Formula 2 season. It puts him 18 points clear of Ilott in the championship with five races remaining.

Despite his retirement, Lundgaard remains joint third in the standings, tied on 145 points with Yuki Tsunoda, but both now 41 adrift of Schumacher.

Behind Ghiotto, Daruvala took fifth ahead of Aitken and Mazepin. Zhou took eighth after a frustrating run, though it puts him on pole position for tomorrow’s sprint race. Marcus Armstrong and Dan Ticktum completed the points-scorers, though the latter is under investigation for rejoining the track incorrectly at turn two.