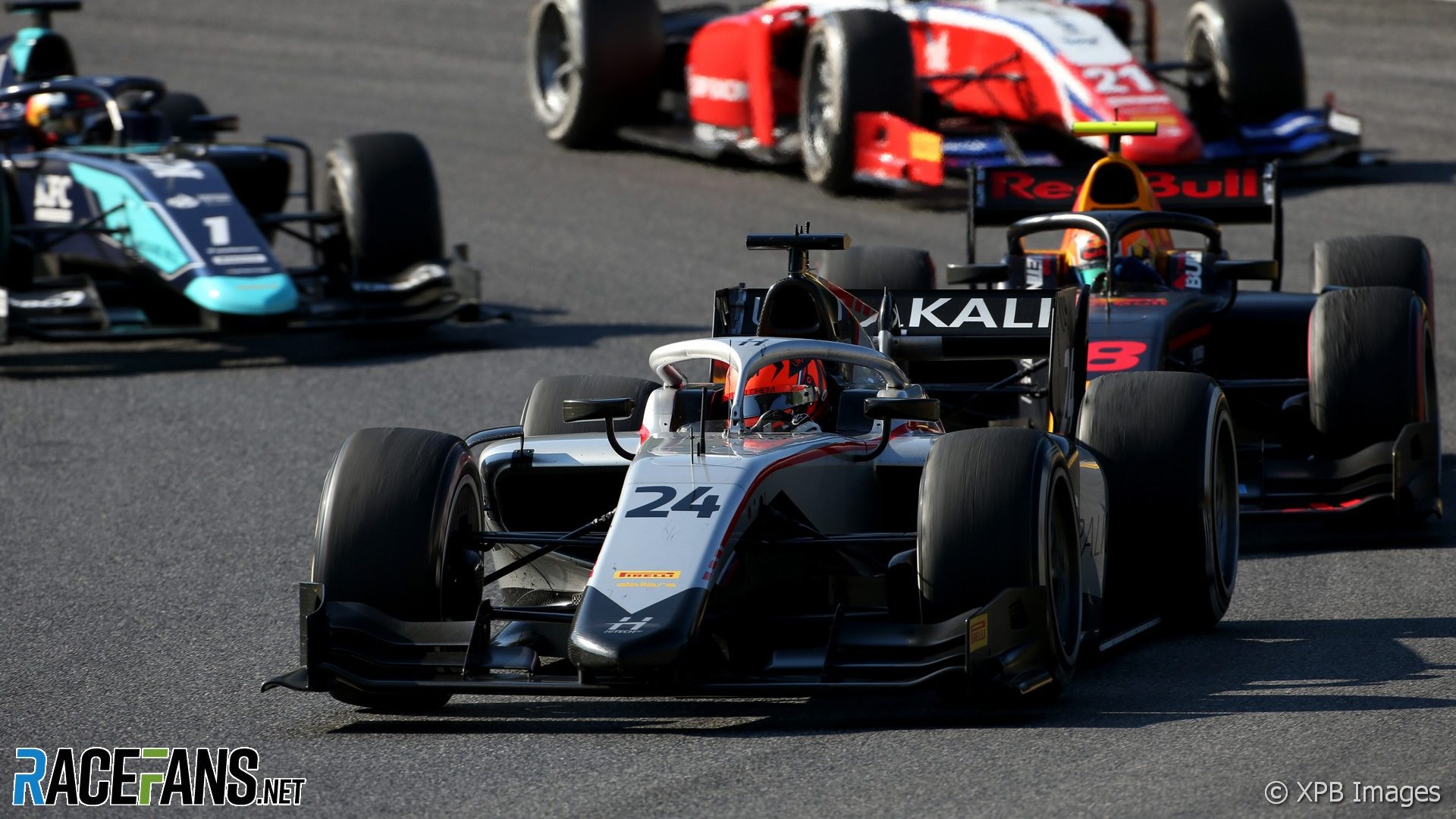 Nikita Mazepin won a lively feature race from 14th on the grid following a pair of late-race Safety Car periods.

He led home team mate Luca Ghiotto in a one-two for series newcomers Hitech. Behind them Mick Schumacher took the lead of the championship by continuing his run of good form as misfortune struck team mate Robert Shwartzman.

The action began well before the lights went out. Pole winner Christian Lundgaard was waved out of the pits in front of Shwartzman, who brake and was hit from behind by Callum Ilott. Repairs were need to the back of the Prema driver’s car.

Lundgaard, starting the weekend an outsider in the championship 33 points behind leader Callum Ilott, made a good getaway and led fellow front row starter Dan Ticktum by more than a second by the end of lap one.

The main casualty of the start was Ilott, who immediately slipped back from third to seventh place. Luca Ghiotto went the other way, climbing to fourth.

Lundgaard swiftly headed in once the pits open to change to medium tyres from his softs on lap seven. Ghiotto and Ticktum were by this point battling for the lead and for a second it looked as though the race might be decided in the pits, as Ticktum emerged ahead of Ghiotto, the pair still trailling Lundgaard.

Ilott, at this point, had been able to move back to the front and fought Ticktum as soon as Ghiotto had dispatched him for second place. However he lost time behind Roy Nissany, allowing Yuki Tsunoda to overtake him for a net fourth place.

Shwartzman, already having a poor weekend having only qualified ninth during a disrupted session yesterday, retired on lap 18 with mechanical problems potentially related to the pre-race collision. He pulled up at a marshal post and his car was tidied away without disruption.

But when Giuliano Alesi pulled up at another marshal post a few laps later with smoke belching from his car a tractor was required to remove the car from the circuit due to the tight exit space. That meant the Safety Car was summoned, following a brief Virtual Safety Car period.

The race restarted on lap 26, with cars heavily bunched, to immediate and chaotic effect. Tsunoda and Ticktum clashed, sending Ticktum into the gravel and down to ninth while Schumacher, Aitken and Guanyu Zhou tangled on the run out of San Donateo as they went three-wide. Both Aitken and Zhou stopped with damage, the former on track and the latter in the gravel, requiring another Safety Car immediately.

During the short green flag period Nikita Mazepin made remarkable progress, weaving through the pack to take third. Having started on the harder rubber, and now on barely-used soft tyres, he suddenly looked in contention for the race win.

By the time there was a restart, with just three laps to go, Lundgaard was seriously suffering on his older tyres and he immediately slipped down the order to an eventual sixth. Mazepin was able to pass second-placed Felipe Drugovich and then rapidly take Hitech team mate Ghiotto to take and hold the lead to the chequered flag.

Ticktum, who ultimately finished 17th and far from the points despite running in podium contention for almost the whole race, expressed extreme frustration several times on the radio: “In terms of how that race could have played out with the Safety Cars and everything and the strategy and everything I could not have been more unlucky,” he complained. “Literally, it couldn’t have been worse. I don’t know what I’m doing in my life to deserve this, I really don’t.”

Schumacher now leads the championship on 153 points, Ilott (who finished 12th) is still in second place with 149 and Shwartzman third with 140. Artem Markelov takes reverse-grid pole for tomorrow’s sprint race after only his second points finish in F2 this year.