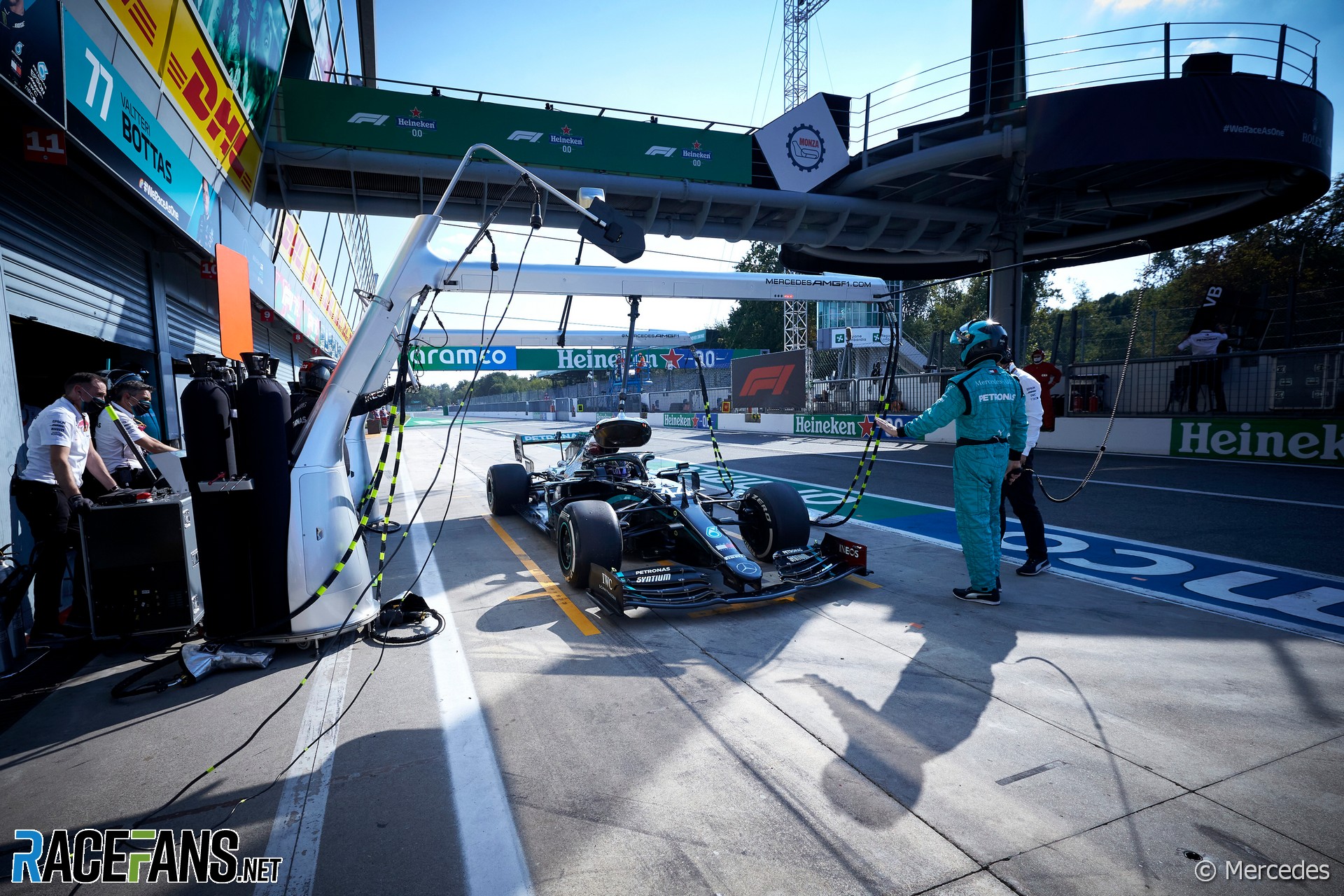 Mercedes lost a potential victory at Monza partly because they failed to warn Lewis Hamilton early enough not to enter the pit lane during a Safety Car period.

Would other teams have avoided making the same error in the same circumstances? On the face of it the answer is ‘yes’, because only one other team – Alfa Romeo – made the same mistake as Mercedes.

But a closer look at the circumstances highlights how the pressure of time was different from team to team. With Hamilton, Mercedes had a much tighter time window to get the call right. It’s far from clear all the other teams would have done better in the same situation.

Ordinarily a Safety Car deployment at this stage in the race would prompt most drivers who had not yet made their mandatory pit stop to come in. Indeed, many teams immediately advised their drivers of their plans, such as Renault, who told their drivers to pit. It is rare for the pit lane entrance to be closed, and clearly many teams did not expect it to happen.

At the moment the Safety Car was deployed, Hamilton was leading the race and was the closest driver to the pit lane entrance. He was approaching the final corner, Parabolica, around 16 seconds ahead of second-placed Carlos Sainz Jnr.

Unfortunately for Hamilton, it took 23 seconds to get the message to him. He had already crossed the pit lane entry line and was lining up for his pit stop when race engineer Pete Bonnington told him: “Stay out, pit lane entry should be closed.”.

So did any team warn their drivers the pit lane entrance was closed more quickly than that? And, more importantly, quick enough that, if Mercedes had done the same, Hamilton might have avoided entering the pits and getting a penalty?

Before comparing the numbers it’s important to remember that the pressures of time were different further behind Hamilton. McLaren had the luxury of 16 more seconds to warn Sainz, and the drivers behind had even more time.

That said, one team was noticeably quick on the draw, and it was a team who consistently impress with their well-drilled pit crew and sharp strategies: Red Bull. Max Verstappen was told the pit lane entrance was closed 18 seconds after the Safety Car was deployed.

Even so, had Hamilton got that message that quickly, he would have been little more than a second from the pit lane entrance. A last-second swerve might still have spared him that costly pit stop.

McLaren also deserve credit for not allowing Sainz to follow Hamilton into making the same mistake. Sainz saw his rival had come in, which left him concerned:

McLaren leaving Sainz out should have alerted any other teams who hadn’t noticed the pit lane entrance was closed. Some clearly only noticed at the last moment.

Sergio Perez, running fourth behind the two McLarens, was originally told “we will be stopping” when the Safety Car was deployed. His engineer hurriedly warned him “pit entry is closed” as he came within sight of it.

While Mercedes realised their mistake too late to warn Hamilton, they were able to tell Valtteri Bottas in time for him to avoid making the same mistake, as he was running 28 seconds behind his team mate at the time.

Mercedes had little time to get the call right and fell short by around five seconds. But while the 23 seconds it took them to warn Hamilton wasn’t enough for him, it would have been more than enough for every other driver in the race.

But Alfa Romeo blew the call even with a relative luxury of time. From the moment the Safety Car was deployed until Giovinazzi illegally entered the pits they had 75 seconds – almost a minute more than Mercedes – to notice that the pit lane entrance was closed.

The fact almost all of Alfa Romeo’s rivals had stayed out apparently failed to give them a clue. Giovinazzi’s radio was clearly working – they told him to pit at the exit of the Ascari chicane.

But as mentioned initially, Mercedes’ failure to warn Hamilton was only part of the reason for his race-losing penalty. Hamilton could have seen for himself that the pit lane entrance was closed via the red cross signals on the outside of Parabolica.

Which begs the question: Did any driver spot those lights for themselves without first being noticed by the team?

Take a bow George Russell. The team initially warned him the “pit lane will be busy” after the Safety Car was deployed. He then spotted the lights at Parabolica and asked if the pit lane entrance was closed, which the team confirmed.

Wonder if he’s mentioned that to Toto Wolff yet…