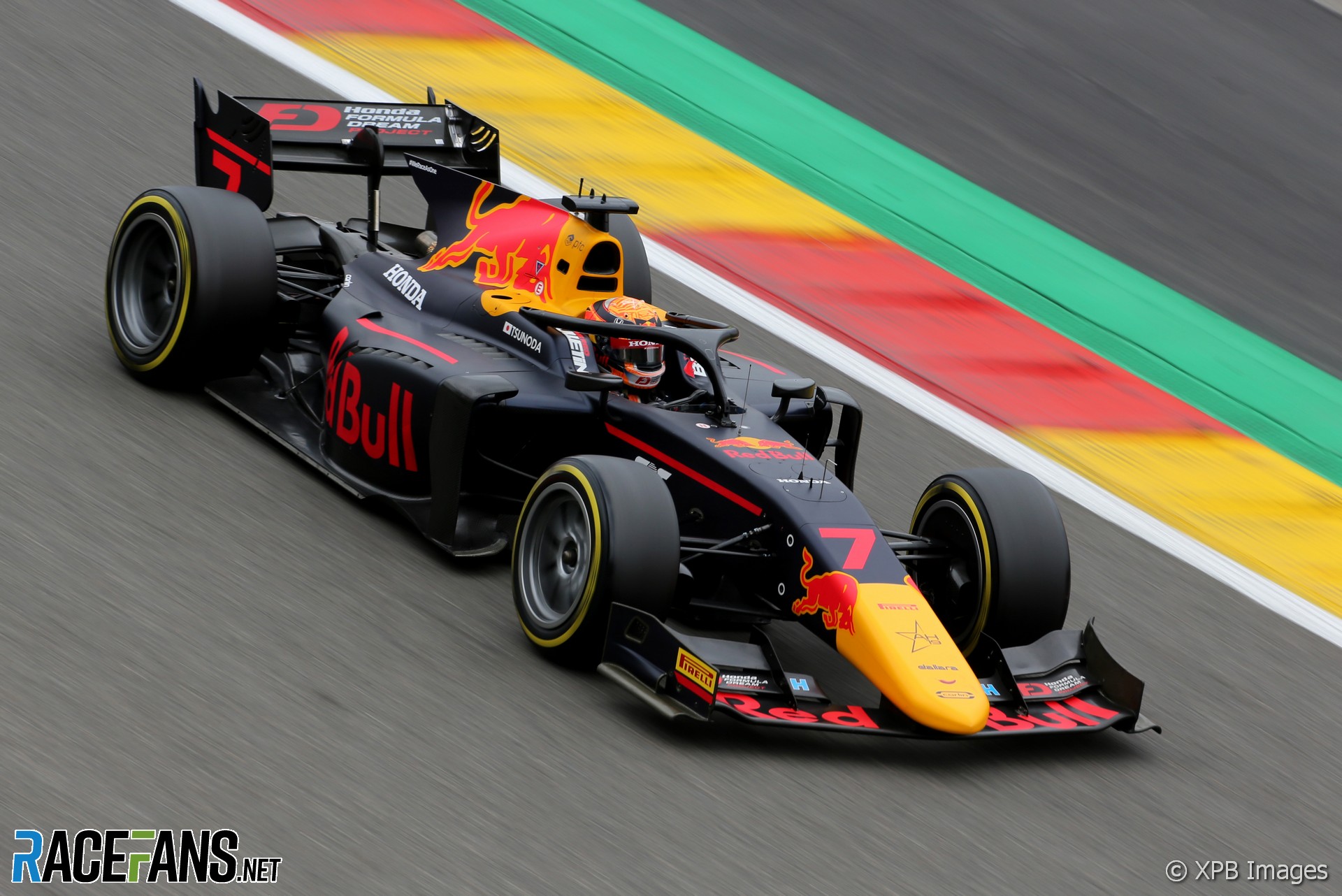 The Hitech driver, who was already under investigation for a separate incident, was given a five-second time penalty for forcing Tsunoda off the track at Les Combes while the pair were disputing the lead.

The start of the race followed a minute of silence for the late Anthoine Hubert, involving his family members, Juan Manuel Correa and drivers and personnel from the F1 paddock as well as the F2 grid.

Honda junior Tsunoda started from pole, sharing the front row with Mazepin, who was making his first-ever front row start. Nobuharu Matsushita and Robert Shwartzman lined up behind them.

Tsunoda made an incredible start, leaving his rivals a second behind within half a lap. Matsushita managed to pass Mazepin for second in a very bold move, the two going into Eau Rouge side-by-side, while Shwartzman was jumped by team mate Mick Schumacher and Louis Deletraz.

By lap four Matsushita’s tyres were beginning to fade and he dropped back from Mazepin. MP Motorsport team mate Felipe Drugovich tried to take advantage but the pair clashed at Blanchimont. Matsushita suffered a big hit but was thankfully unharmed. Drugovich was forced to pit for a new front wing and the Virtual Safety Car was deployed, which meant no drivers could pit for tyres even once the six-lap pit window opened.

At the restart, Tsunoda held the lead and the drivers which had started on soft tyres began the game of pit-chicken for when to move to mediums. Matsushita had severe degradation by lap three but no drivers actually came in to the pits before Schumacher and Mazepin on lap 10.

Tsunoda was able to draw out a more than three-second lead over Mazepin, which meant after Schumacher and Mazepin pitted he had a nine-and-a-half second gap to Zhou, on mediums.

Tsunoda came in on lap 11th for what turned out to be a slow pit stop, putting him back out in 13th place, behind Mazepin. The Hitech driver also had problems in the pits, prompting the stewards to announce a post-race investigation for an unsafe release – a decision which promised to have ramifications for the outcome.

By the time the others had pitted, Mazepin led Tsunoda, Schumacher, Deletraz and Shwartzman. Dan Ticktum, who’d started 14th after missing practice due to an inconclusive Covid-19 test, had made his way steadily up the field to lead the pack behind them, five seconds back from Shwartzman.

In the final laps, Roy Nissany – having an exceptionally good race, after only scoring a point once previously in F2 – made a pass on Luca Ghiotto for eighth to take reverse-grid pole for the sprint race.

Tsunoda closed in on Mazepin and the pair repeatedly went side-by-side into Les Combes. On the penultimate lap Tsunoda nosed ahead into the braking zone but Mazepin clung to the racing line, forcing his rival off. He stayed ahead to the finish, Tsunoda breathing down his neck, and Schumacher further back in third.

However during the victory lap the stewards handed Mazepin a five-second time penalty for the incident with Tsunoda in their battle at Les Combes. That promoted Tsunoda to first place, though Schumacher was far enough behind that Mazepin retained second.

Championship leader Callum Ilott had had another difficult weekend, starting 12th and finishing 10th for a single point to narrowly retain his lead. Shwartzman’s fifth place finish leaves him only nine points behind Ilott.

Tsunoda, who dedicated his second win of the year to Hubert, is now just two points behind Shwartzman in the standings.