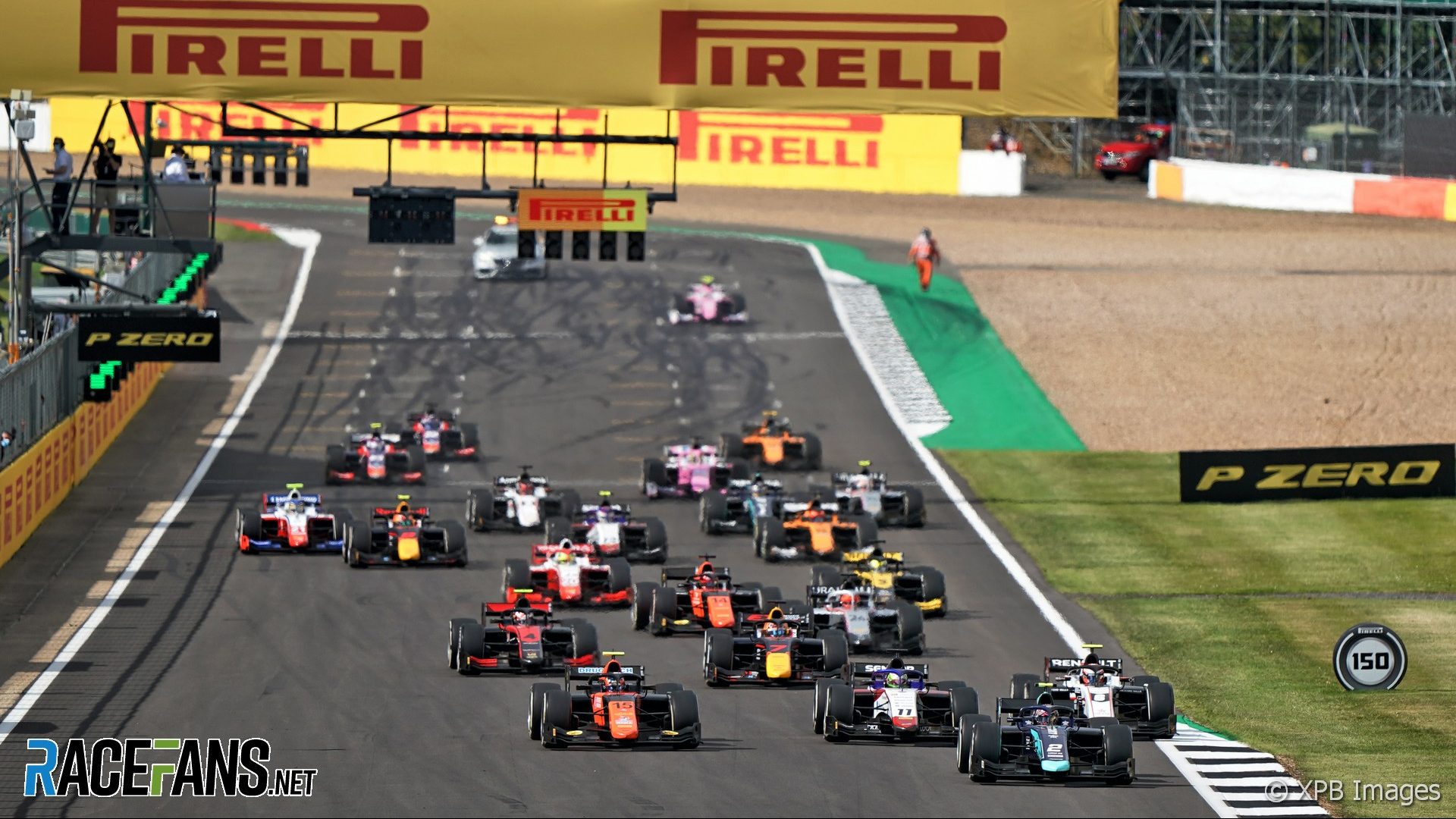 Dan Ticktum won the Silverstone sprint race from pole position, taking his first F2 victory at home after seeing off a late-race challenge from Christian Lundgaard.

Having taken pole position by dint of finishing eighth in yesterday’s race, Ticktum made a clean getaway while Lundgaard rocketed past Callum Ilott, Louis Deletraz and Felipe Drugovich into second.

The race was neutralised soon afterwards as Yuki Tsunoda’s stranded Carlin had to be retrieved after he was knocked into a spin by Ilott at turn one. The Virtual Safety Car period was relatively short and Ticktum was able to pull out a gap over his pursuers as soon as the race restarted on lap three, despite Lundgaard trading fasets sectors with him around the circuit.

Ilott, already having a fairly woeful weekend after being unable to take his start from second on the grid yesterday, was given a five-second penalty for the contact with Tsunoda. And that wasn’t the end of his troubles.

Following an impressive drive to second in the feature race, Guanyu Zhou was again on a charge. He passed a struggling Drugovich and then made a bold move into Stowe on a relatively traction-deficient Nikita Mazepin. That put him on the tail of Ilott.

Robert Shwartzman, who’d failed to score for the first time this season in yesterday’s feature race, had an extended battle with a beleaguered Jack Aitken for 10th. The championship leader eventually grabbed the spot but was still two places away from the points

Ticktum’s tyres were visibly graining by lap 15 of 21, and he had both Ilott and Zhou bearing down on him. But Ilott spun his car at the exit of Vale and stalled, bringing out the Safety Car and drawing a curtain over his frustrating weekend.

The safety car worked to the advantage of Lundgaard, Deletraz and Zhou. ART made the surprising decision to pit Lundgaard from second place for fresh medium tyres, gambling he would be able to make up places in any remaining racing laps. He rejoined in fifth place, while Ticktum, Deletraz and Zhou chose to stay out, hoping the slower laps would save enough of the hard rubber to make it to the end

Shwartzman took the gamble, having made it up to ninth. But he plummeted to 17th courtesy of a disastrous pit stop as Prema appeared to confuse his tyres with Schumacher’s when the pair came in together.

Racing restarted on lap 19, with a furious battle for ninth emerging between five cars, led by Aitken. The points-paying positions ahead were consequently relatively untroubled by the pack.

Lundgaard’s tyre gamble looked like it might just deliver him a victory. He moved ahead of Zhou and drew within two seconds of leader Ticktum by the penultimate lap.

But despite setting the fastest lap, Lundgaard was unable to get close enough to take the lead. Ticktum took the chequered flag while Zhou dramatically spun out of fourth, falling to eighth place.

Ticktum became F2’s seventh different winner from the first eight races, and Shwartzman’s championship lead is now under serious pressure, though Ilott’s spin let him off the hook. Behind Shwartzman on 81 points Ilott has 73 while Lundgaard has risen to 69.