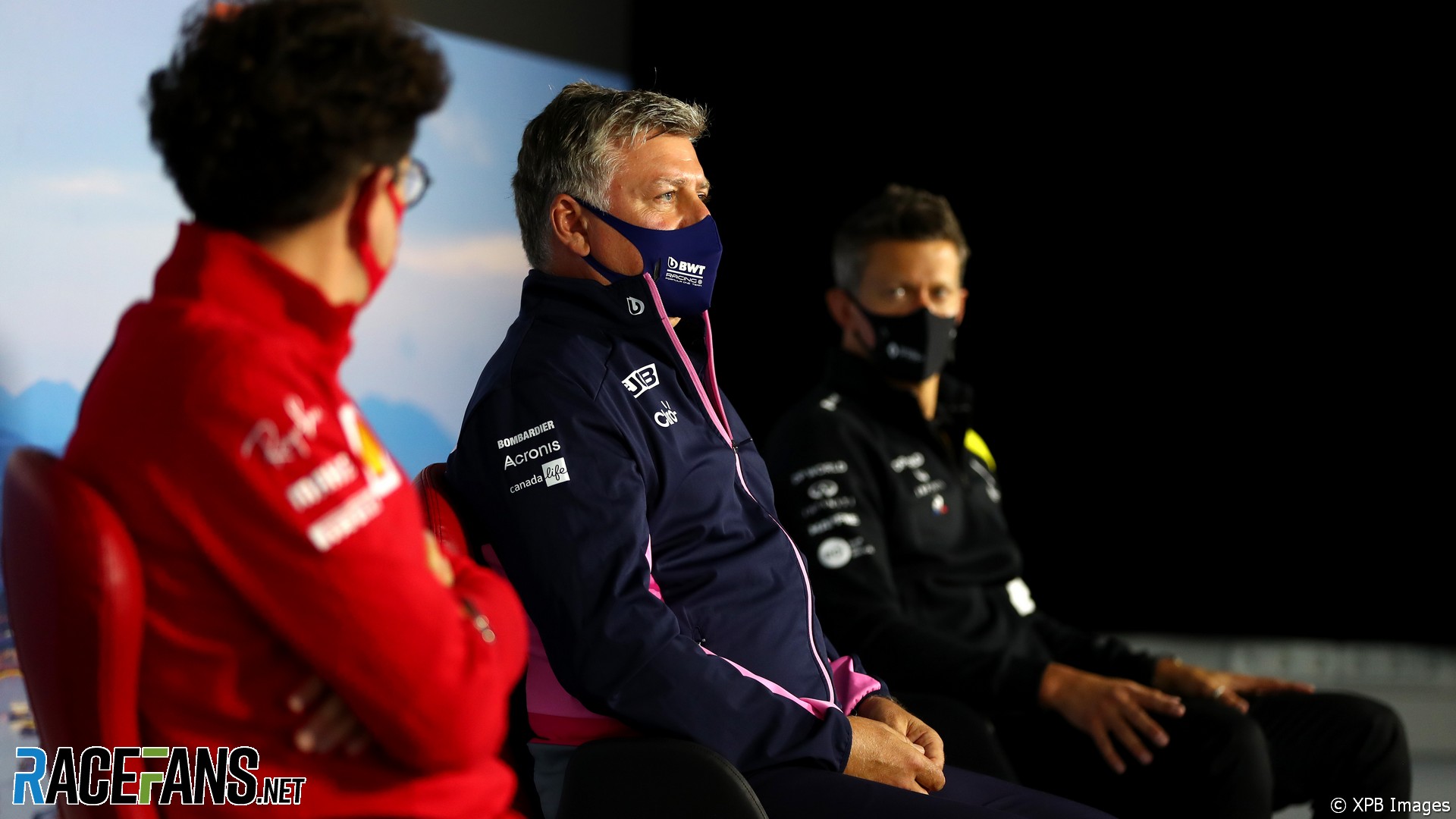 Racing Point will supply its response to Renault’s protest against their car in three weeks’ time, the team’s CEO has said.

The team’s finishing positions in last week’s Styrian Grand Prix, and the points it scored, remain provisional following Renault’s protest over the legality of the car’s brake ducts.

Racing Point CEO Otmar Szafnaeur said the team had been braced for a protest since the championship’s abandoned season-opening race four months ago.

“There were rumours of a potential protest in Australia so our expectations were that something would happen,” said Szafnauer in today’s FIA press conference. “We now have to put together the evidence to show that we’re completely legal. I think we have three weeks to do that and that’s exactly what we’re working on now.”

There is therefore unlikely to be any development in the matter before the fifth round of the championship, the 70th Anniversary Grand Prix at Silverstone, on August 9th.

Renault’s protest concerns whether Racing Point’s car, which is closely based on last year’s Mercedes, is their own design to the extent the rules require. It has questioned whether aspects of its rivals’ design, specifically the brake ducts, could match the Mercedes as closely as they do based solely on photography of the parts.

Asked whether he is confident the FIA will run a “bulletproof” investigation, Szafnauer said: “I think the process is bulletproof. We’ll provide all the evidence that was asked of us.

“I think the the outcome will be bulletproof as well. Which is quite nice because there are things that camera can’t see, especially the internal surfaces of a brake duct for example that we completely designed and developed ourselves and then when you compare the two parts by the FIA, they’ll absolutely know that the brake ducts are unique and our IP [intellectual property] and designed by us.”

Renault executive director Marcin Budkowski said the team focused its protest on Racing Point’s brake ducts partly because of the difficulty of copying them from photographs alone.

“Brake ducts are essential performance differentiators in today’s Formula 1 cars,” he explained. “They are not only there to cool the brakes, they are an essential aerodynamic device at the front and at the rear in terms of extracting aero performance over there. And they are also essential in controlling the tyre temperatures and we know that tyre temperatures are fairly important in Formula 1 nowadays. So that’s that’s one of the reasons.

“The other reasons, as Otmar touched on, is there are surfaces that are visible to the eye and to the cameras of the numerous photographers that go up and down the pit lane. There’s also surfaces that are impossible to see from outside. It would be difficult to copy them from pictures.”

Budkowski hopes the protest will also focus attention on how far Formula 1 is prepared to allow teams to copy each other’s cars.

“For us it’s important to clarify what is permissible and what isn’t for the event we protested, for the rest of the season, for the next season. But also what Formula 1 we want the future. What is the model we want?

“Do we want to model where we have 10 teams independently fighting each other? Especially the context of fair sport: A more equal distribution of funds, the cost caps, all teams eventually coming to a similar level of spending – maybe not straight away but with time.

“And for us, it’s important to clarify what kind of level of exchange is permissible. Is it permissible to get geometries from another team and use them on your car or not? Because we don’t think that’s the right model for F1 in the future. So it’s really beyond the protest, beyond this race, it’s what kind of model we want for the future of F1.”