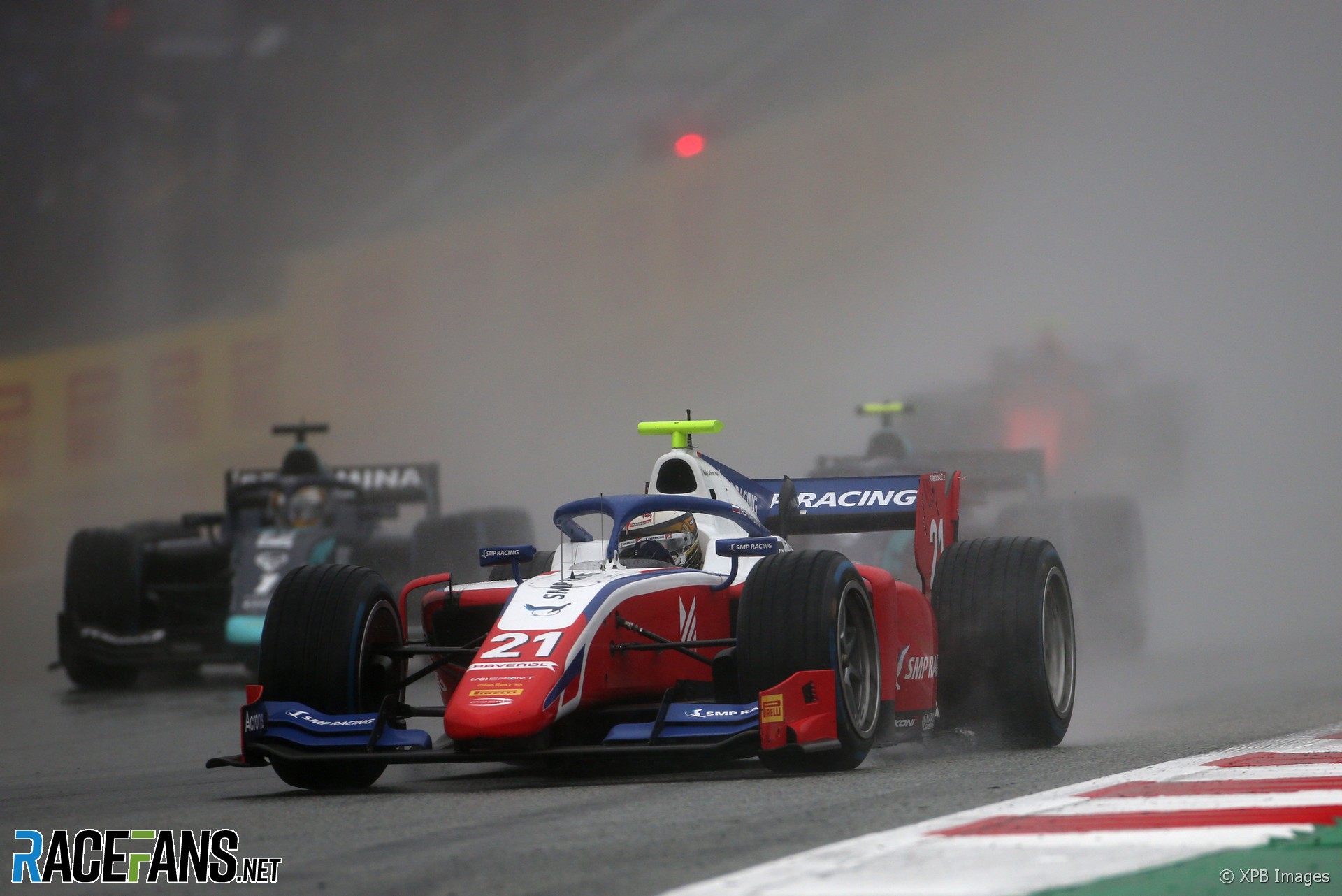 Pole winner Yuki Tsunoda led the majority of the race but an apparent radio malfunction led to a late pit stop and took him out of contention. Guanyu Zhou, robbed of victory by a technical problem in the same race a week earlier, held on for the final podium place.

Artem Markelov unexpectedly parked his HWA machine in the gravel before he’d even made it to the original grid, reducing the starters to 21. When the field departed behind the Safety Car under continuous rain, Zhou remarked on the radio that he didn’t believe the race would start, saying he couldn’t keep his car in a straight line.

Sure enough, on the fourth pre-race formation lap worsening conditions forced the session to be red-flagged and cars came back into the pit lane at around 17:45 local time. Drivers had repeatedly reported a total lack of visibility, Callum Ilott saying he couldn’t see the car ahead of him.

“When do you think they’re going to say it’s not going to change?” he asked during the hiatus. His Virtuosi engineer replying that the light was already going in Spielberg and they expected it to be called off. Eventually a Safety Car start was called for 18:35, despite rain continuing to fall and kerbs visibly full of water.

The race distance was reduced to 36 laps on account of the laps already run. On the fourth lap of the new race, the message came that the Safety Car was coming in. Tsunoda made it away cleanly from the rolling start, if not especially quickly, as cold tyres and probably equally cold drivers by this point, tried to get racing.

Tsunoda and Zhou managed to get away from Ilott – drawing out four and a half seconds of gap over the first two racing laps. Ilott and Aitken then tangled and fell back.

Ticktum, struggling in 17th, described the extremely poor visibility on lap seven. “I cannot see a [censored by FOM] thing. Not a thing. Nothing.”

Christian Lundgaard seemed untroubled by the dire conditions, however, and commenced a charge up the field from eighth to fifth after only a few laps of racing. The Renault junior driver was one of few in the field making up time within the pack, rather than slipping backwards from Tsunoda and Zhou’s lead.

By lap 18, last week’s sprint race winner Felipe Drugovich’s front brakes were glowing so neon, as well as spraying carbon dust, that his MP Motorsport team were forced to tell last weekend’s sprint race winner to pit. Despite visible flames emerging from them during his pit stop, Drugovich went back out as it became clear he was far from the only car with cooling problems.

The track was finally starting to dry out and the tell-tale rooster-tails falling away from the back of the cars. With no intermediate tyre available in F2 drivers were being forced to manage increasingly dog-eared full wets on the off chance that, from lap 21, they could save their pit stop to go to a dry tyre in the final laps.

Tsunoda stayed out until lap 24, while the recently-pitted Zhou set a new fastest la pas he took colossal chunks of lap time out of him. Tsunoda was told to come in, but he seemed not to hear the summons, and didn’t arrive until he was shown a board ordering him to pit.

A poor pit stop put him out well behind leader Zhou, emerging from the pit lane in fourth and straight into a battle with Roy Nissany. Meanwhile Shwartzman was able to overtake Zhou, who looked comparatively helpless for traction.

Ilott and Tsunoda ended up scrapping for third on lap 28, the Red Bull junior eventually using fresher rubber to pass the Ferrari Driver Academy member. However, a three and a half second gap to Shwartzman with only seven laps to go was a substantial barrier between Tsunoda and regaining the lead he’d held for so much of the race.

Despite the odds, Tsunoda took Zhou on lap 30 with a roaring move down the inside of turn one, moving on to hunt down Shwartzman’s now three-second lead. Lapping a second per lap faster, Tsunoda must have realised that despite the drying track chewing through most drivers’ wet tyres, the error with his pit stop had given him an advantage.

In the end, Shwartzman managed to hold on despite a back-and-forth between them that matched a battle for third between Zhou and Mick Schumacher.

Despite it looking for an hour as though the race wouldn’t even run, 36 laps were completed so full points awarded, moving Shwartzman into the championship lead. Schumacher took fourth ahead of Ilott, Lundgaard and Armstrong.

Ticktum eventually rose to eighth place, from starting 15th, putting him on pole for tomorrow’s reverse-grid sprint race. Despite the conditions, Giuliano Alesi and Guilherme Samaia were the only drivers to join the non-starting Markelov in retirement.