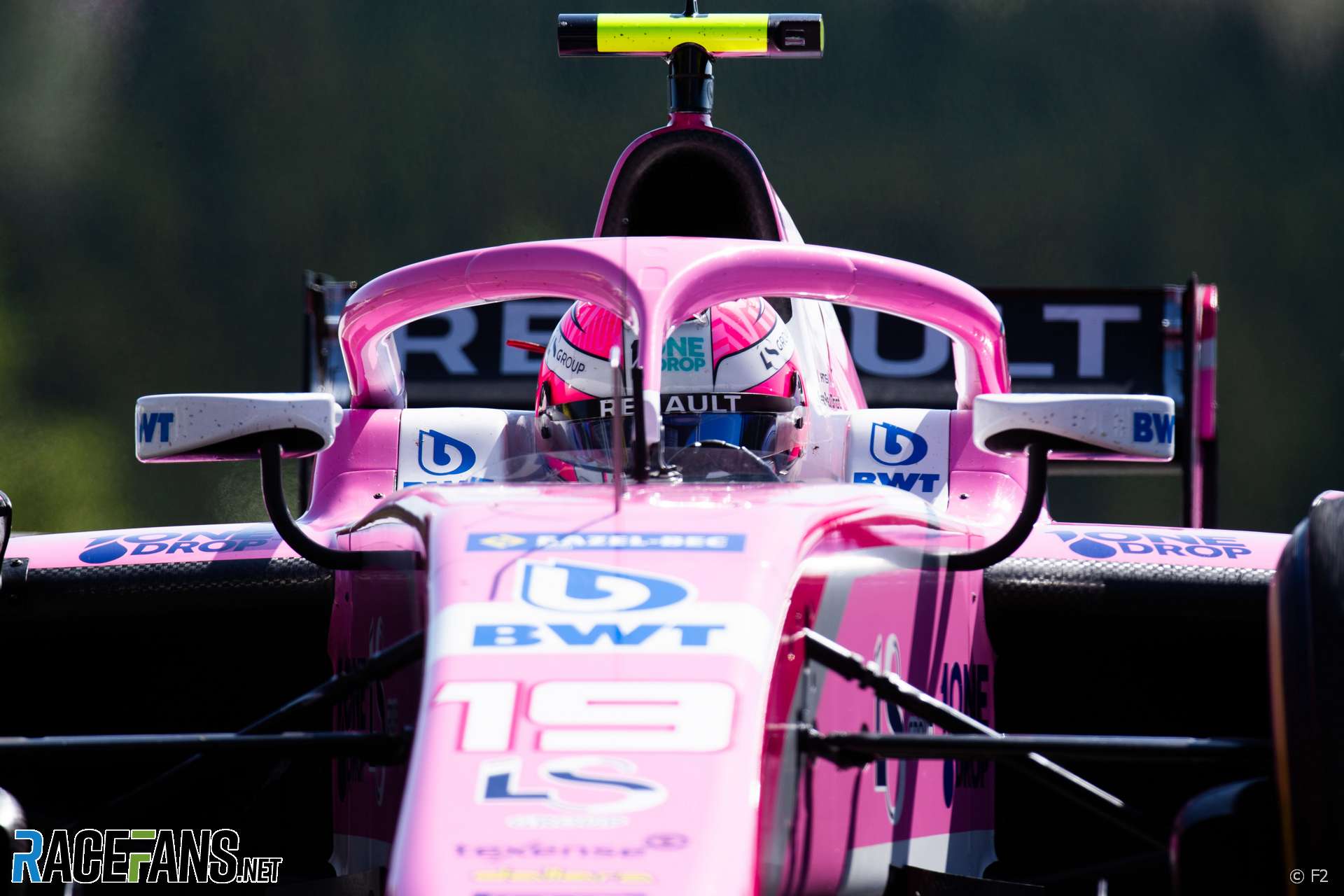 The FIA has released the findings of its reports into the crash during a Formula 2 race at Spa-Francorchamps last year which claimed the life of Anthoine Hubert and left Juan Manuel Correa with serious injuries.

Having concluded its investigation into the crash during the feature race on August 31st the FIA ruled all four drivers involved in the crash – Hubert and Correa plus Giuliano Alesi and Ralph Boschung – acted correctly.

The FIA’s investigation determined “there was no single specific cause” explaining why Correa’s car came to strike Hubert’s at an angle of almost 90 degrees. The fatal collision occured following a “chain of events [which] resulted in a protracted and complex crash sequence”. The analysis took into consideration physical evidence, video footage of the crash and the accounts of those involved.

The investigation found the crash began Alesi’s car struck a barrier at the exit of Eau Rouge. There is a “reasonable probability” Alesi lost control due to a right-rear tyre deflation, according to a summary of the investigation released by the FIA.

Boschung and Hubert moved to avoid the collision but the pair made contact with each other. Hubert, travelling at over 260kph, lost his front wing and struck the barrier at Raidillon (turn four). That impact sent his car back towards oncoming traffic.

The first yellow flags were shown 1.8 seconds after Alesi hit the barrier. However 1.5 seconds after the yellow flag was shown Correa struck debris from Alesi’s car. Now out of control, Correa’s car struck Hubert’s 1.6 seconds later.

Data from the investigation revealed Correa’s car was travelling at 218kph when it hit Hubert’s at an angle of 86 degrees. Hubert’s car sustained an 81G impact an accelerated from a virtual standstill to over 100kph as a result.

“The dynamics of the car-to-car impact in terms of speed and trajectory were such that an extremely high level of energy was transferred and dissipated, translating into non-survivable trauma to Anthoine Hubert and very serious injuries to Juan Manuel Correa,” the report summary noted.

“The investigation found no evidence that any driver failed to react appropriately in response to the yellow flag signal or to the circumstances on track,” it added. “The reaction of marshals and race control in deploying signaling and rescue services in relation to the accident is considered timely and good.”

The full FIA statement on the August 31st Spa crash

The FIA’s Safety department has completed its investigation into the accident in the FIA Formula 2 Championship race at Spa-Francorchamps on 31st August 2019, in which French driver Anthoine Hubert suffered fatal injuries and Juan Manuel Correa from the United States was seriously injured.

The investigation included interviews with those involved, inspection of the physical evidence, analysis of available video material, as well as examination of the data from the team Data Logger and Accident Data Recorder. This investigative work has been peer-reviewed by the FIA Research Working Group, chaired by Professor Gérard Saillant. The findings were approved by the FIA Safety Commission, which is led by Commission President Sir Patrick Head, and presented to the World Motor Sport Council.

The investigation focused on the four cars that were involved in the accident – number 19 driven by Anthoine Hubert, number 12 driven by Juan Manuel Correa, number 20 driven by Frenchman Giuliano Alesi, and number 21 driven by Switzerland’s Ralph Boschung.

During the opening lap, an unrelated incident involving a slow-moving car caused a yellow flag at turns 12 and 13 (Fagnes). The race leader began lap two, at which point sector one was under a green flag.

The accident sequence, which lasted a total of 14.6 seconds, was initiated on lap two when Giuliano Alesi lost control of his car on the exit of turn three (Eau Rouge), initially spinning and leaving the track on the left-hand side, before impacting the barrier rearwards 1.9 seconds after the loss of control and rebounding onto the track after turn four (Raidillon). The investigation has highlighted a reasonable probability that a loss of internal pressure of the right rear tyre contributed to the loss of control of Giuliano Alesi’s car.

Following the impact of Giuliano Alesi’s car with the barrier, the debris from broken components was spread onto the race track. In an attempt to avoid Giuliano Alesi and the debris, Ralph Boschung and then Anthoine Hubert moved to the right, leaving the track and entering the run-off area of turn four. The reaction of Ralph Boschung and Anthoine Hubert to the accident of car number 20 started prior to the yellow flag being deployed, due to the proximity of these cars at the time of the incident. The yellow flag was deployed by the marshals at post five (turn four) 1.8 seconds after the impact of Giuliano Alesi’s car with the barrier.

Travelling at 262 km/h and with his front wing missing, Anthoine Hubert lost control and was set on a trajectory towards the barrier on the right-hand side of the turn four exit run-off area, which he impacted at an angle of approximately 40 degrees at a speed of 216 km/h, generating a peak force equivalent to 33.7g.

Following the impact and energy absorption by the barrier, the car was ejected and continued to travel in the racing direction while rotating, such that the left-hand side of the chassis was facing oncoming cars in the run-off area of turn four.

In the meantime, Juan Manuel Correa was approaching the scene of Giuliano Alesi’s accident. He was travelling approximately on the racing line, towards the right-hand side of the track on the exit of turn four when he hit debris left behind from Giuliano Alesi’s car. The impact with the debris was approximately 1.5 seconds after the yellow flag had been deployed and it resulted in front-right suspension damage and the loss of the front wing, causing Juan Manuel Correa to lose control. His car veered to the right, off track and into the run-off area of turn four, setting him on a trajectory that would result in the car-to-car impact with Anthoine Hubert 1.6 seconds later.

Following the car-to-car impact, Anthoine Hubert’s car was accelerated to 105.4 km/h and struck the barrier a second time before rebounding back towards the track.

Double yellow flags were deployed 2.5 seconds after the car-to-car impact, followed by a red flag 2.7 seconds later as car number 19 (Anthoine Hubert) came to rest on track on its left-hand side, with car number 12 (Juan Manuel Correa) stopping in an inverted position on track 2.6 seconds later.

The medical and rescue response started 12 seconds after the initial loss of control of car number 20 (Giuliano Alesi), immediately after the double yellow flag was deployed and prior to car number 12 (Juan Manuel Correa) coming to rest. The first on site medical evaluation of Anthoine Hubert was conducted 54 seconds after the red flag.

The first extrication team arrived at the scene within two minutes of the accident occurring.

In summary, the findings of the investigation are as follows:

Safety improvement is a continuous process, therefore conclusions drawn from this accident and others like it from around the world will be integrated into the ongoing work of the FIA to further develop motor sport safety. In 2019 the FIA Safety department conducted investigations into 28 serious and fatal accidents related to circuit racing, supported by the ASN (National Sporting Authority) in each country.

This article will be updated.