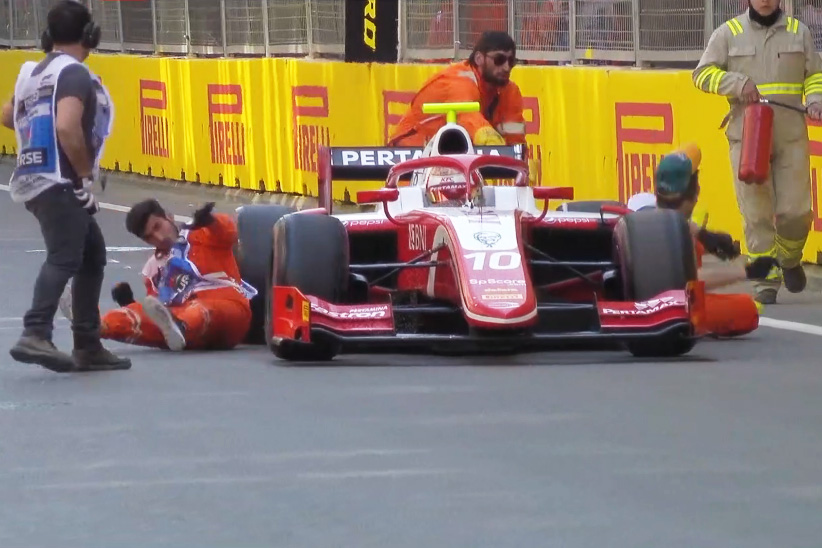 Formula 2 driver Sean Gelael has been disqualified from today’s qualifying session after knocking two marshals over while restarting his car.

The Prema driver had come to a stop at turn seven when an electrical problem on his car caused its engine to cut out. The session was red-flagged allowing Gelael’s car to be recovered.

However as the marshals began pushing Gelael’s car away he restarted the engine, causing two of them to fall over.

Formula 2 confirmed Gelael “restarted his car which resulted in a dangerous situation for the marshals”.

“He was then prohibited from taking any further part in the session,” added F2 in a statement. “Furthermore, it was decided that he was disqualified from the results, but the Stewards have given him permission to start tomorrow’s feature race from the back of the grid.” As Gelael did not set a time in the session he originally placed 20th out of the 20 drivers.

“Those who patiently preserve will truly receive a reward without measure,” Gelael wrote on social media. “Electronic issues caused the engine to stop at the start of qualifying. Will start race 1 from the back.”

Gelael is set to start the race from 19th position as rival Mahaveer Raghunathan has been ordered to start the race from the pit lane for failing to stop at the weigh bridge. Raghunthan had already been given a 10-place grid penalty for the event after passing the chequered flag twice in the Bahrain sprint race.

30 comments on “Gelael disqualified for knocking marshals down”