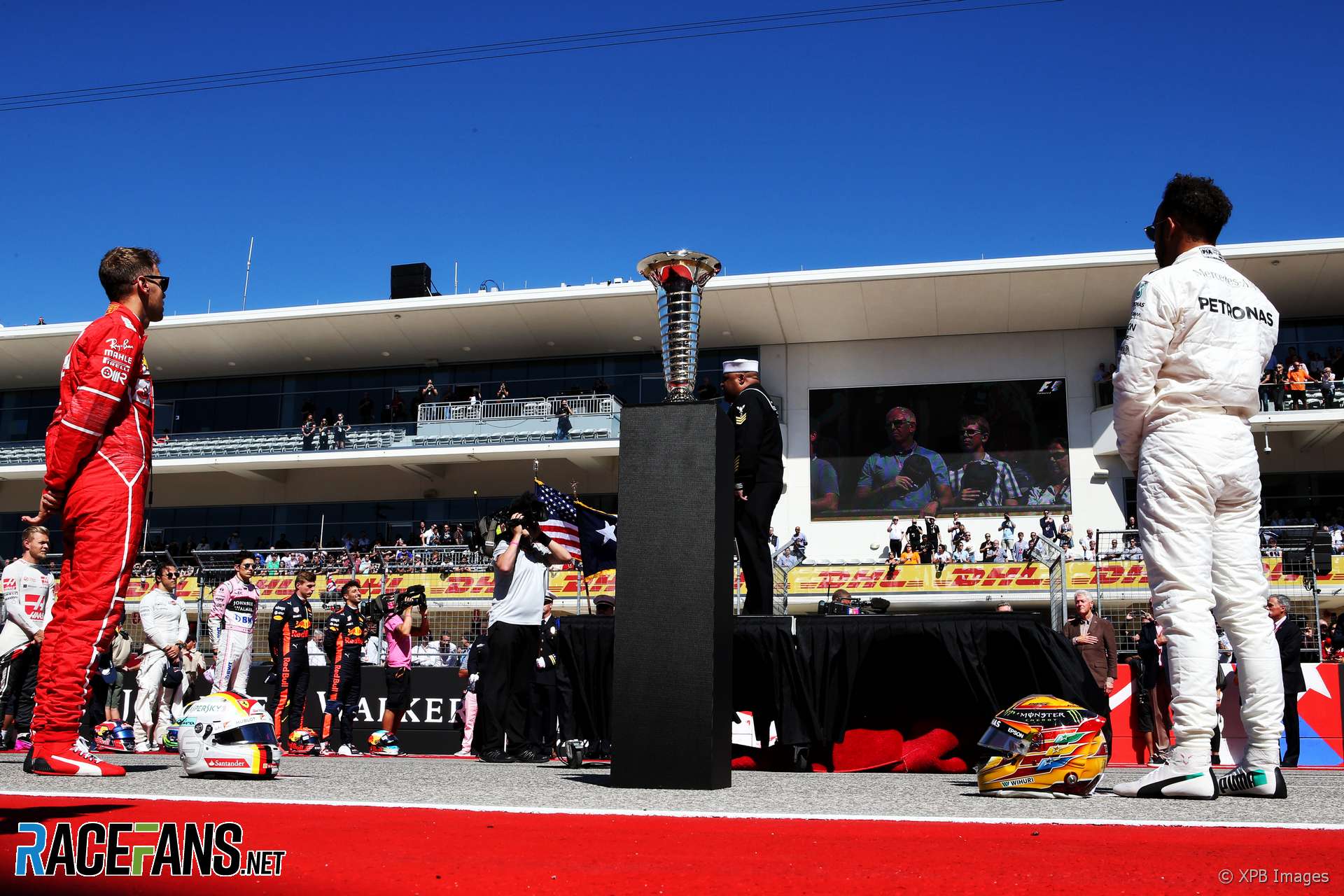 The championship which for so long looked like it would go down to the final race could be wrapped up with three rounds to spare on Sunday.

Will Lewis Hamilton clinch the crown at the Circuit of the Americas? Here’s five talking points for this weekend’s race.

Will Hamilton clinch his fifth title?

It increasingly looks like a matter of ‘when’, not ‘if’, Hamilton will be crowned champion. For Sebastian Vettel to get back in the fight at this stage would take a major change of luck.

It wouldn’t be completely unprecedented. Think back to 2000, when points leader Michael Schumacher retired in first-lap crashes in consecutive races in Austria and Germany. Title rival Mika Hakkinen would have taken full advantage had a track invader bent on scuppering Mercedes not intervened at the Hockenheimring.

But everything points to Hamilton putting a lock on his fifth world championship this Sunday or next. Mercedes are riding high, and if he leads a third straight one-two for the team this weekend it will be job done.

His record at the Circuit of the Americas is daunting as well – he’s won five of the six races held at this track.

Another change at Toro Rosso?

Neither Toro Rosso driver managed to convert their top 10 start into a points finish at Honda’s home race last time out. But Brendon Hartley’s slump from sixth on the grid to 13th at the line was exactly what his 2019 career prospects did not need.

While the Toro Rosso management stressed in Japan it was still within Hartley’s power to guarantee his place at the team next year, rumours grow about the second seat alongside Daniil Kvyat next season. Alexander Albon, who had signed a deal to race for Nissan in Formula E, was conspicuously absent from their test team this week amid rumours a shock deal is in the works.

F1’s sole American team are enjoying undoubtedly their most competitive season so far. But despite being regular contenders for ‘best of the rest’ honours, they are at risk of missing out on fourth in the championship.

Indeed had it not been for Force India’s mid-season points reset, Haas would be sixth behind them and Renault along with the ‘big three’. As it is they are eight points off Renault, and though they could wipe out that lead if their Italian Grand Prix appeal is upheld, that doesn’t seem likely.

A strong result at home could put it beyond doubt. The VF-18 has been great in quick corners this year and they should have the upper hand over Renault this weekend. But rare have been the weekends where both Haas drivers have had trouble-free events.

As the now seven-year-old Circuit of the Americas continues to bed in, the race organisers have faced increasing problems with bumps developing on its surface. The long, flat-out stretch from turn 11 to turn 12 has been a particular problem.

During their race weekend earlier this year Moto GP riders complained again about the bumps, which they claim have been exacerbated by the huge downforce levels F1 cars produce.

F1’s plans to run a race in Miami next year had to be shelved but they’re still eyeing an event in 2020. While the grand prix weekend kicks off in Texas, F1 will hold a fan festival event in Miami which it hopes will inspire support for a street race at the circuit in 2020. Will F1’s second US race ever get off the ground?

Meanwhile back in Austin the pre-race razzmatazz which divided opinion last year has been quietly, and perhaps not surprisingly, dropped.

Driver of the Weekend

Who do you think will be the team to beat in the United States Grand Prix? Have your say below.

14 comments on “Will Hamilton clinch his fifth title? Five US GP talking points”