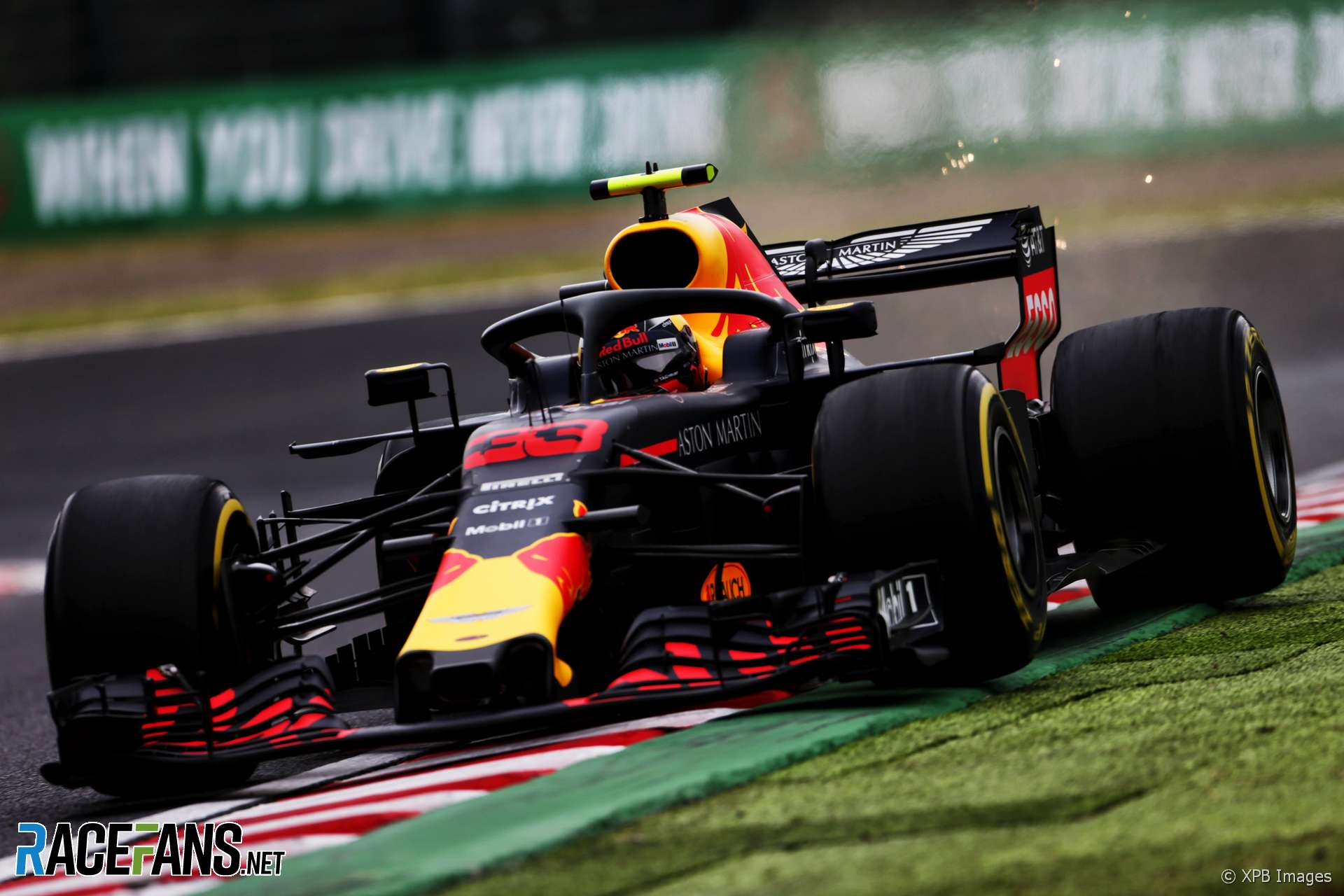 Max Verstappen capitalised on Ferrari’s strategic error in Q3 to beat the pair to third. He kept both behind in the race after incidents with the pair of them. He tangled with Raikkonen while rejoining the track at the chicane – the stewards ruled he rejoined in an unsafe fashion. He was fortunate to survive contact with Vettel at Spoon without significant damage.

He spent the remainder of the race chasing down Bottas, who was on mediums in the second stint. Verstappen filled the Mercedes’ mirrors on the softs but never got close enough to attempt an overtake.

Sergio Perez made it into Q3 but failed to set a representative time after running wide at the exit of Spoon curve, and qualified tenth. He got by one of the Toro Rossos off the line and then the other through the pits.

Having narrowly failed to jump ahead of Romain Grosjean he used the VSC period to pass the Haas. A well-timed restart gave him a run on Grosjean, who he passed around the outside of the chicane on his way to finishing best of the rest.

On a weekend when the Renault was not competitive – Nico Hulkenberg crashed in final practice and went out in Q1 – Carlos Sainz Jnr snatched a point through sheer tenacity.

He made the difference by running a long opening stint on the soft tyres and, in the final laps of the race, forcing his way past Pierre Gasly. Team principal Cyril Abiteboul hailed his outgoing driver’s “important” achievement.

Lewis Hamilton was fastest in all three practice sessions and qualifying on his way to the top step of the podium. He didn’t have to deal with the threat of the Ferraris in Q3 and easily beat Bottas by three-tenths. Mercedes made all the right strategy calls during the rain showers to set him up perfectly to grab pole.

He got off the line well, in the race, and led comfortably into turn one. Bottas never had the pace to challenge the championship leader and Hamilton led from start to finish. He had the fastest lap of the race until Vettel stole it on the penultimate lap.

His problems began when the team sent him out on the intermediate tyres on a dry track at the beginning of Q3. After switching to slicks he only had one chance to set a clear lap which he spoiled with errors at Degner and Spoon curve.

His race began well: he out-dragged the Toro Rossos into turn one, going wheel-to-wheel with Gasly through the double right hander, then braved it out with Grosjean at Spoon. But an attempt to lunge down the inside of Verstappen at the same corner following the Safety Car restart was optimistic, and led to contact. Vettel spun, dropping to 19th, from where he could only recover to sixth.

While Grosjean was able to get through Q2 on softs, Magnussen was out-qualified by six-tenths and failed to make the cut. His race ended after a contentious block on Leclerc which the stewards deemed a racing incident but provoked strong criticism from Leclerc and Sauber. He suffered a puncture and damage to his floor and rear diffuser so the team chose to retire his car.

Ericsson’s qualifying was over by the time he reached Dunlop where he ran wide at the exit and made heavy contact with the wall. Starting from the back, he gained two places by the time the Safety Car came out but made contact with Leclerc as racing resumed. He was forced to come in for a new front wing and switched to the medium tyres for the remainder of the race, eventually finishing 12th.

Aside from Q2, Bottas spent the whole weekend behind Hamilton but was good enough to help Mercedes secure a one-two in qualifying and the race. He faced constant pressure from Verstappen in the second stint but was able to hang on until the chequered flag.

Ricciardo didn’t make it out of Q2 thanks to an engine problem. He quickly made his way through the field and was able to get by Raikkonen, who was affected by the damage from his earlier collision with Verstappen.

Grosjean qualified best of the rest on Saturday but had a difficult race: a fire damaged several sensors and left him without tyre information throughout the race and a suspension fault left the car pulling to the side on the straights. Despite this his only significant mistake was when he lost out to Perez after the VSC, and he was ahead of Magnussen the whole weekend.

Esteban Ocon made it into Q3 but received a three-place grid penalty for failing to slow under red flags during practice three. He started 11th but was able to make it back into the points, finishing ninth.

Toro Rosso displayed the power of their upgraded Honda engine as Hartley qualified sixth and Gasly seventh. Hartley had a poor start in the race and Gasly complained that a long first stint cost him points.

Leclerc had a shot at points after Ocon’s penalty promoted him one place to 10th on the grid. But contact with Magnussen ruined his race. He came in for a new front wing under the safety car and had worked his way back towards the points until a mechanical failure forced him to retire and brought out the VSC. Hulkenberg was also among the race’s retirements.

McLaren beat Williams in the race to stay out of last as Alonso continued to prove his dominance over Vandoorne while fuming over being given a (deserved) five-second penalty. Stroll qualified well in 14th but finished behind Sirotkin in the race after making an early stop under the safety car. Both Williams drivers tried something different to gain an advantage and ran a two-stop strategy that didn’t work.

USA-based Josh joined the RaceFans team in 2018. Josh helps produce our Formula 1 race weekend coverage, assists with our social media activities and...
Read more about Josh Holland, find all their articles and get in touch with them