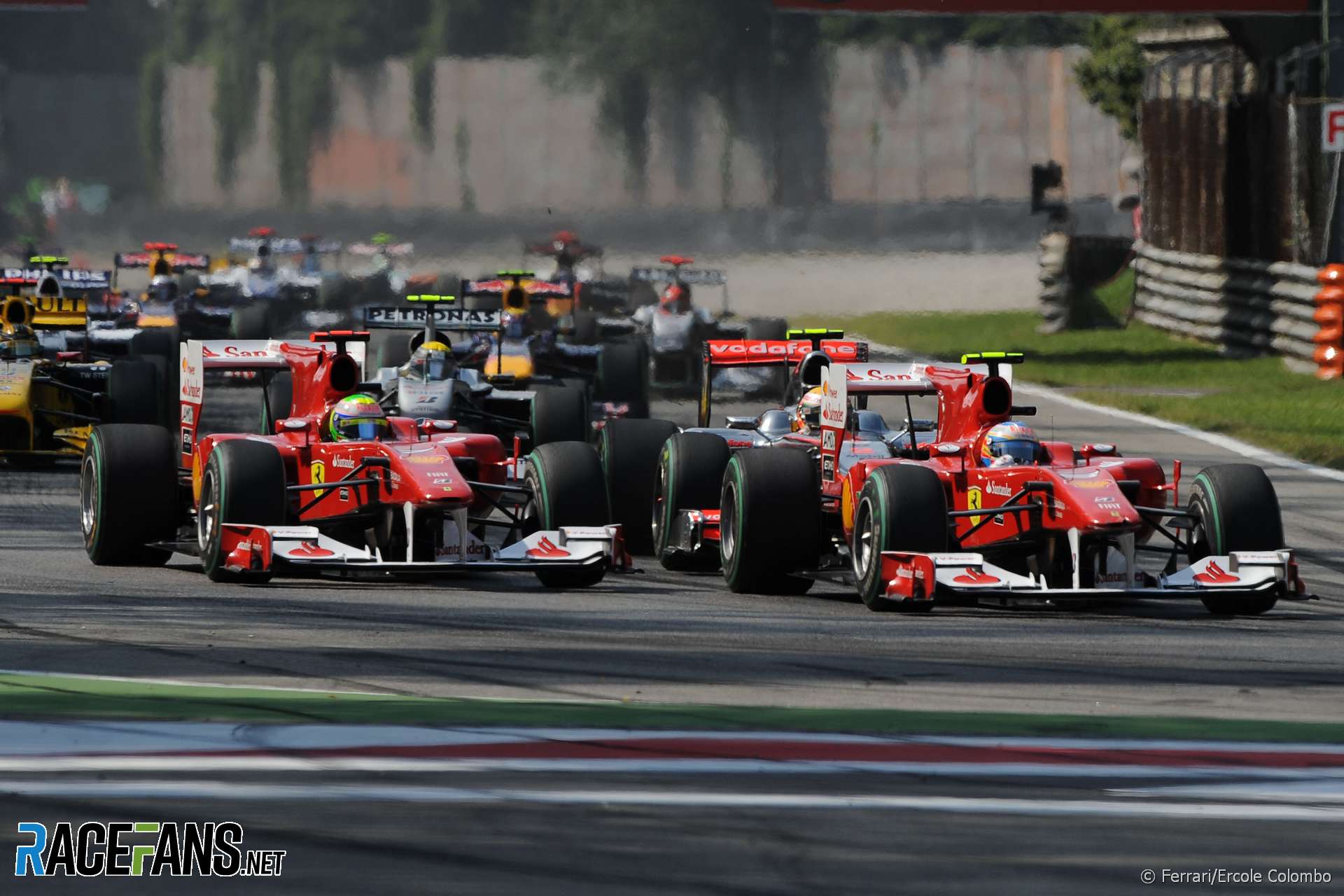 In 2001 Monza had a makeover: The first corner was reshaped into the tight turn it is today. Remarkably, last Sunday’s race was the first of the 18 races held since than that home favourites Ferrari swept the front row of the grid.

Unfortunately for them, this wasn’t the prelude to their first win in front of the Tifosi since Fernando Alonso’s 2010 triumph. This eight-year win-less streak is their longest ever drought on home ground.

Ferrari also went eight years without a Monza victory between Jody Scheckter’s 1979 success and Gerhard Berger’s 1988 win. But Monza wasn’t Italy’s only F1 race at that time: Ferrari took home wins at Imola in the 1982 and 1983 San Marino Grands Prix.

Instead Lewis Hamilton gave Mercedes their fifth consecutive win in the Italian Grand Prix, extending a record they already held. They rubbed it in on the victory lap, telling their drivers to parade side-by-side around the circuit.

At least Kimi Raikkonen got to be the first driver in something other than a Mercedes to lead a lap of this race for the first time in five years, when Sebastian Vettel won for Red Bull. He also broke Juan Pablo Montoya’s 14-year-old record for the fastest lap ever seen in Formula 1 on his way to pole position.

In his 284 race career to date Raikkonen has had far fewer pole positions (18) than fastest laps (46). Raikkonen now had as many pole positions as former Ferrari drivers Rene Arnoux and Mario Andretti – the latter scored the final pole position of his career at Monza 36 years ago.

Raikkonen also became the fifth driver in F1 history to reach 100 podiums. He joins Michael Schumacher (155), Hamilton (128), Vettel (107) and Alain Prost (106). The next-highest driver is Fernando Alonso on 97, though he hasn’t finished on the podium since the 2014 Hungarian Grand Prix.

Hamilton set the fastest lap of the race on his way to victory. Despite the track record falling, his best lap of 1’22.479 was 1.4 seconds off the race lap record, set by Rubens Barrichello in 2004.

It’s been a desperate run of races for Renault-bound Daniel Ricciardo, who’s only finished two of the last six rounds. Red Bull hasn’t scored points with both cars in any of the last six races, something which last happened in 2009.

Sergey Sirotkin was took 10th place and the first point of his F1 career. Russia’s third F1 driver joins his predecessors Vitaly Petrov and Daniil Kvyat as a point scorer.

The Williams driver was promoted to 10th place following the disqualification of Romain Grosjean. Disqualifications are rare in Formula 1: The last driver to be excluded from the race results was Felipe Massa, when his pre-start tyre temperatures and pressures were found to be too high at the 2015 Brazilian Grand Prix.

Have you spotted any other interesting stats and facts from the Italian Grand Prix? Share them in the comments.