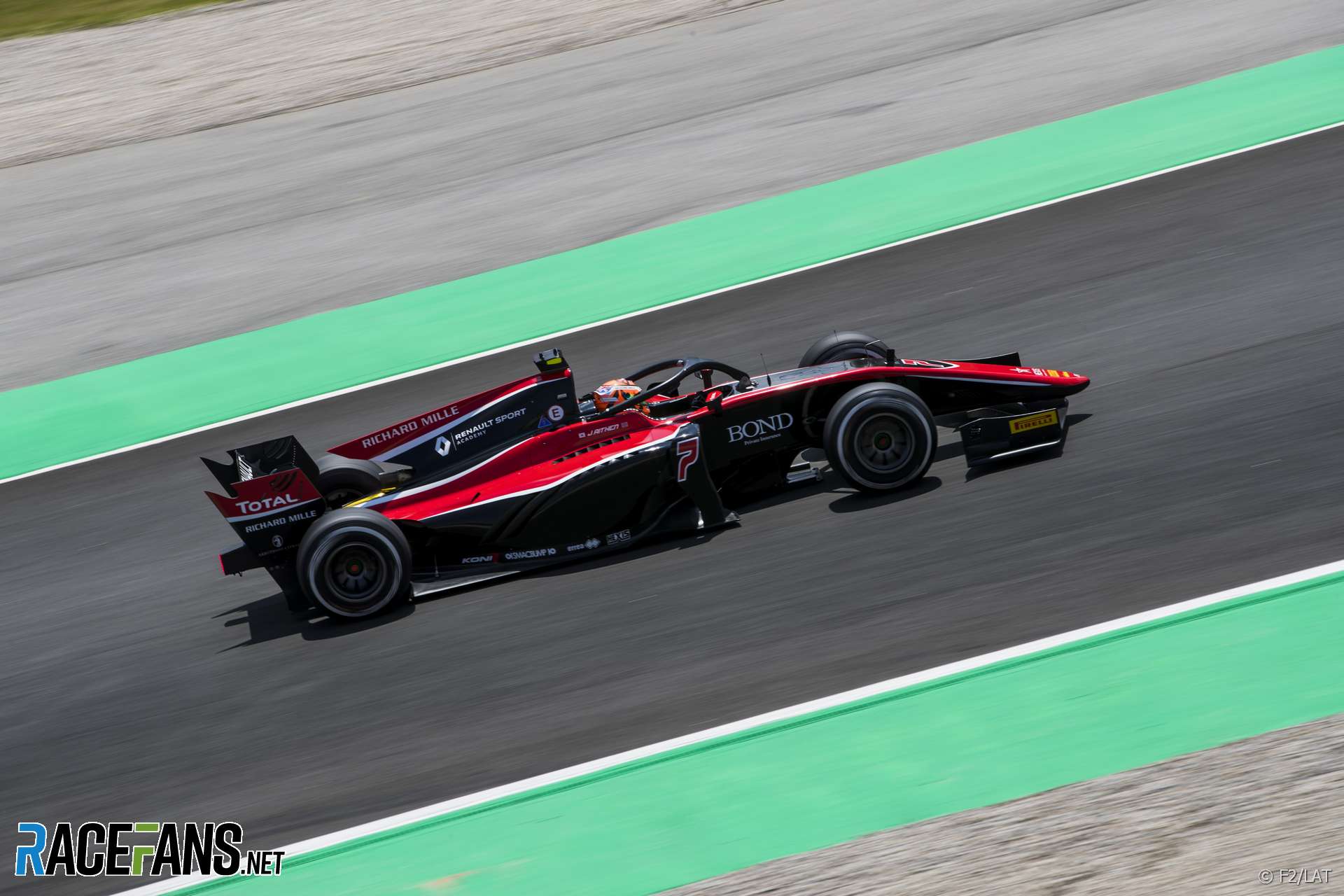 Jack Aitken took his maiden victory in Formula Two with a commanding drive in the Spanish sprint race following a fantastic getaway from third place on a damp track.

Following overnight rain the circuit was still damp in places, though not enough to dissuade anyone from slicks. Artem Markelov got away well from pole but lacked confidence on the brakes into turn one and slipped to fourth, allowing Aitken to scorch into the lead from third on the grid.

Nyck de Vries tried to make early amends for his missed win yesterday with an audacious move down the inside of Markelov at turn four, but was caught out by the wet surface and skated into the gravel and out of the race. There was more drama just a corner later as Roberto Merhi was forced onto the kerb and spun across the track, impressively not collecting anyone.

Further around the lap Lando Norris pulled off an incredible overtake around the outside of Luca Ghiotto at the fast turn nine to move into fourth place, while behind him George Russell moved up to sixth after a clumsy moment between Markelov and Antonio Fuoco at turn ten. de Vries’ brief and dismal race came to end at the same corner following contact, and brought about the first of three Virtual Safety Car periods.

Racing restarted on lap with Aitken somehow having stretched to a 12-second advantage, while behind him Sergio Sette Camara ran wide at turn ten and slipped from second to fifth. It wasn’t long before the race was back under caution however – this time the full safety car – for a collision between Nirei Fukuzumi and Tadasuke Makino at turn four, with both cars ending up as far as the barrier.

A small error at turn five on the restart from Aitken allowed Alexander Albon a sniff, but the Azerbaijan feature race winner couldn’t find a way through. His sprint race winning counterpart however managed to take fifth from Sette Camara, but the Carlin drive then stopped on track as his fire extinguisher went off, bringing about the second Virtual Safety Car.

Russell took another position on the restart by disposing of Ghiotto for fourth at turn one, before the third virtual safety car period when Ralph Boschung stopped on track at turn ten with damage from a puncture. The MP Motorsport driver had put in a strong race from the back of the field, but locked up horrendously into turn and caused an immediate front left puncture.

The gaps remained fairly static from the end of the Virtual Safety Car to the chequered flag, with Aitken taking his maiden victory from Albon and Norris. Russell completed a strong weekend with fourth while Ghiotto, Sean Gelael – who put in a brilliant drive from fifteenth – Antonio Fuoco and Nicholas Latifi completed the points, the latter defending hard on the final lap from Markelov.