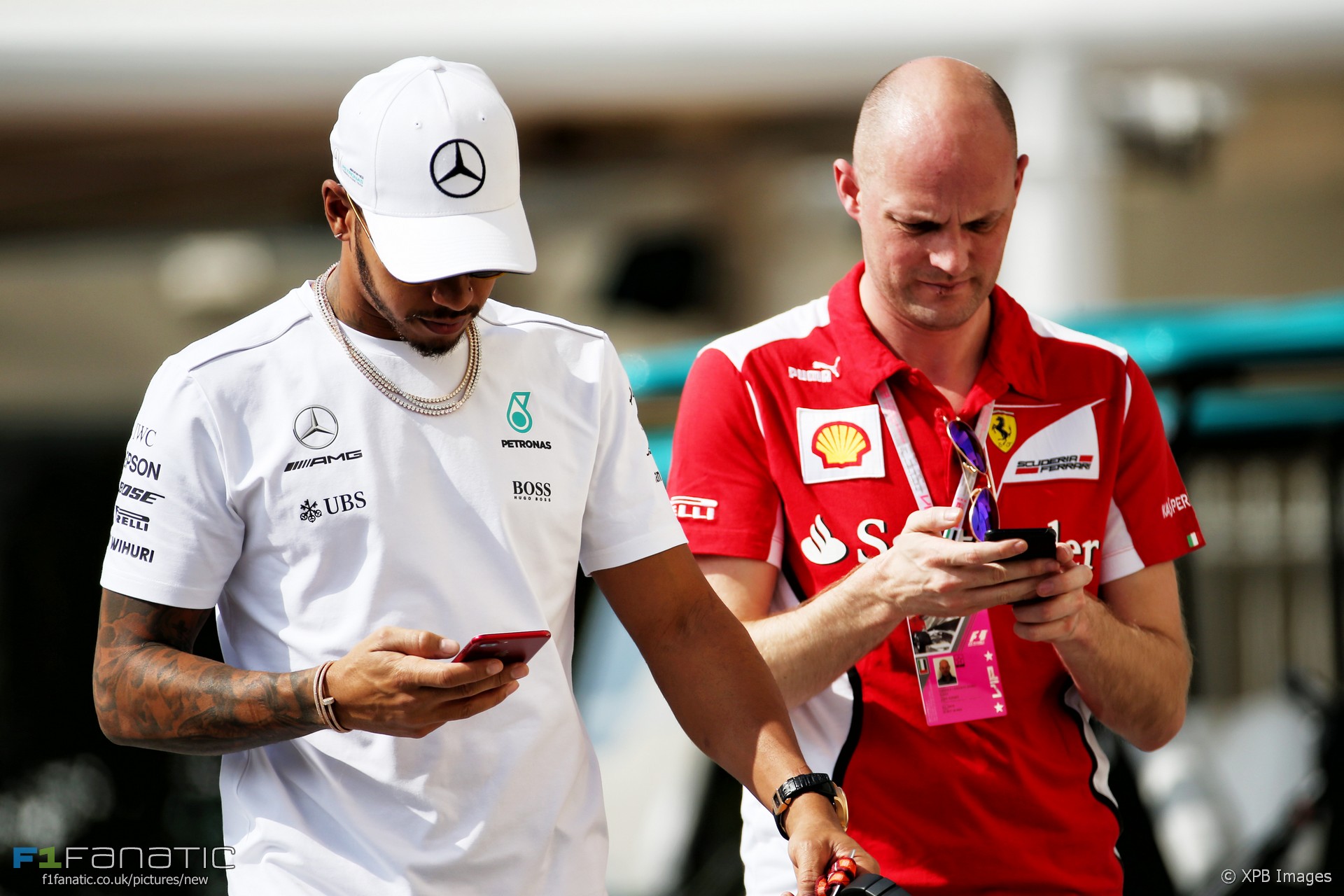 The 2017 season began with one of last year’s teams dropping out and ended with questions over Lewis Hamilton’s tax affairs. Here’s a look back at the highlights which drew the most attention on F1 Fanatic’s Twitter feeds.

That's all of the four teams which were granted entries into #F1 in 2010 now gone: https://t.co/sdgCRIxdyZ pic.twitter.com/vEqVsVrU4Y

So our first glimpse of a 2017 #F1 car design is of the one which won't actually race… https://t.co/rv8CpVNuAg

FIA president @JeanTodt appears to have had a @Twitter account set up just so he can do an advert for @BMW. https://t.co/umWKoRgDR0 #F1

Video of Vettel's crash today – looks very much like a case of aquaplaning: https://t.co/ghOUciUPP8 #F1 pic.twitter.com/g7vfk2MIaB

Interactive: See how much bigger the new McLaren is than the old one – https://t.co/PxUW1z4KLz #F1 pic.twitter.com/FS2dieNIad

"Copse at Silverstone, turn nine at Barcelona, those are no longer corners" – Newey: https://t.co/0TUmvylZCy #F1 pic.twitter.com/AIXb5K9jZb

A good view of Ferrari's wing flaps flexing under braking and acceleration through turn one. https://t.co/J6CSYgYMO1 #F1 #AusGP pic.twitter.com/LdUwUQtUxK

Force India have kept the pink to a minimum on their drivers' 2017 race suits. https://t.co/UA9fOFYFR4 #F1 pic.twitter.com/o9R8GJJfvP

Who are the most popular drivers on F1 Fanatic right now: https://t.co/wbvjYzbOGo #F1 pic.twitter.com/MdPbOyHzUD

Ricciardo: "Let's get the [censored by FOM] out of here."

Alonso: "I don't need [censored by FOM] drinks! There is enough concentrating to keep the car on the track." #F1 #ChineseGP

Alonso will miss the Monaco Grand Prix to race in the Indianapolis 500 #F1 https://t.co/YEnonPhR5m pic.twitter.com/sPIE8anuAu

Just a graphics glitch, though it looks like a few #F1 drivers have caught the @alo_oficial bug and decided to race elsewhere too… #F2 pic.twitter.com/QQIaViZ8d2

So official Ayrton Senna ketchup is a thing. Anyone tried it? #F1 pic.twitter.com/wfbHHBqHnW

What a miserable excuse for a circuit.#F1 has a contract to race at @SochiAutodrom until 2025. You know what to do, Liberty… #RussianGP pic.twitter.com/w0NTJrx4fK

L25 Alonso: "How they can't overtake me I don't know. I never raced with less power in my life." #F1 #BahrainGP

Quite the understatement! Glad he's OK.

He'll be gutted when he realises he forgot to put a memory card in. #F1 #MonacoGP https://t.co/KFT4uDMhrB pic.twitter.com/cbyU3SjLjL

Gutted for Alonso. But massively respect him for taking on this endeavour in the first place. This is what makes motor racing heroes. #F1

At this point you have to wonder if Honda are ever going to sell a car in Spain again. #F1 #IndyCar #Indy500

Patrick Stewart does a Shoey.
Hamilton: "There's a lot of toejam in those."
Stewart: "I don't care – I made the podium for the first time!"

Raikkonen: "There's some people taking pictures at the side of the track. If you go off you will hit them." #F1 #CanadianGP pic.twitter.com/Ik2pF1Phpo

Magnussen: "There's a Ferrari cap under the bridge, can they remove it?" #F1 #CanadianGP

Ricciardo: "Was that who I think it was?"
"Yeah."
Ricciardo: "[Censored by FOM] sore loser." #F1 #HungarianGP

"All OK with the car Carlos?"
Sainz: "Yeah all OK. You can tell Danny he did a very good job there." #F1 #BritishGP

Perfect example of how DRS ruins racing: Mega pass at Blanchimont by @Anto_Fuoco who is then left defenceless at Kemmel. #F2 pic.twitter.com/qQwmvUzgpv

Not forgetting his other injuries, this image shows the extent of Kubica's right arm damage. Makes his return all the more incredible. #F1 pic.twitter.com/TVsTMwyeDi

Wolff says Alonso's "history" with Mercedes is why he won't get 2018 drive #F1 https://t.co/nVudfvZHse pic.twitter.com/WjVtELfza8

Alonso: "Embarrassing, really embarrassing."
"Yep Fernando we see that. Be careful, we have two warnings for turn four." #F1 #BelgianGP

Huge drama in #F3: @McLarenF1 junior @LandoNorris was about to clinch the title but was taken out on the last lap by @aron_ralf! pic.twitter.com/QSHk4KJesb

If Hamilton's Mercedes had broken down in Spain instead of Bottas', the championship would be this close: https://t.co/pbqfqQmwQZ #F1 pic.twitter.com/CrWqcBx8a6

Hulkenberg: "Did we beat the McLaren or not?"
"You're in front of both McLarens."
Hulkenberg: "[Censored by FOM] yeah baby, in your face!"

A show of support for Mexico from @ForceIndiaF1 following the earthquake which killed over 300 people last week: https://t.co/Klw2ex37Dv #F1

Mika Salo, the driver steward this weekend, posted this video of the @Max33Verstappen incident being examined. #F1 https://t.co/NuL5fopVOv pic.twitter.com/6lmGRAYuGY

And that wasn't the biggest shock… #F1 pic.twitter.com/xmvyNSe2pJ

Hamilton: "Did he hit me deliberately?"
"Not sure, Lewis." #F1 #MexicoGP #MexicanGP

Total number of racing laps completed on the hard tyres in 2017:

In a now-deleted @Instagram post, @LewisHamilton took a swipe at @nico_prost for a move which happened three years ago. He's right, but rather late… #F1 #FE pic.twitter.com/IgSuG7hdLe

Which #F1 driver had this record against his team mate this year?

Clue: It's not Stroll