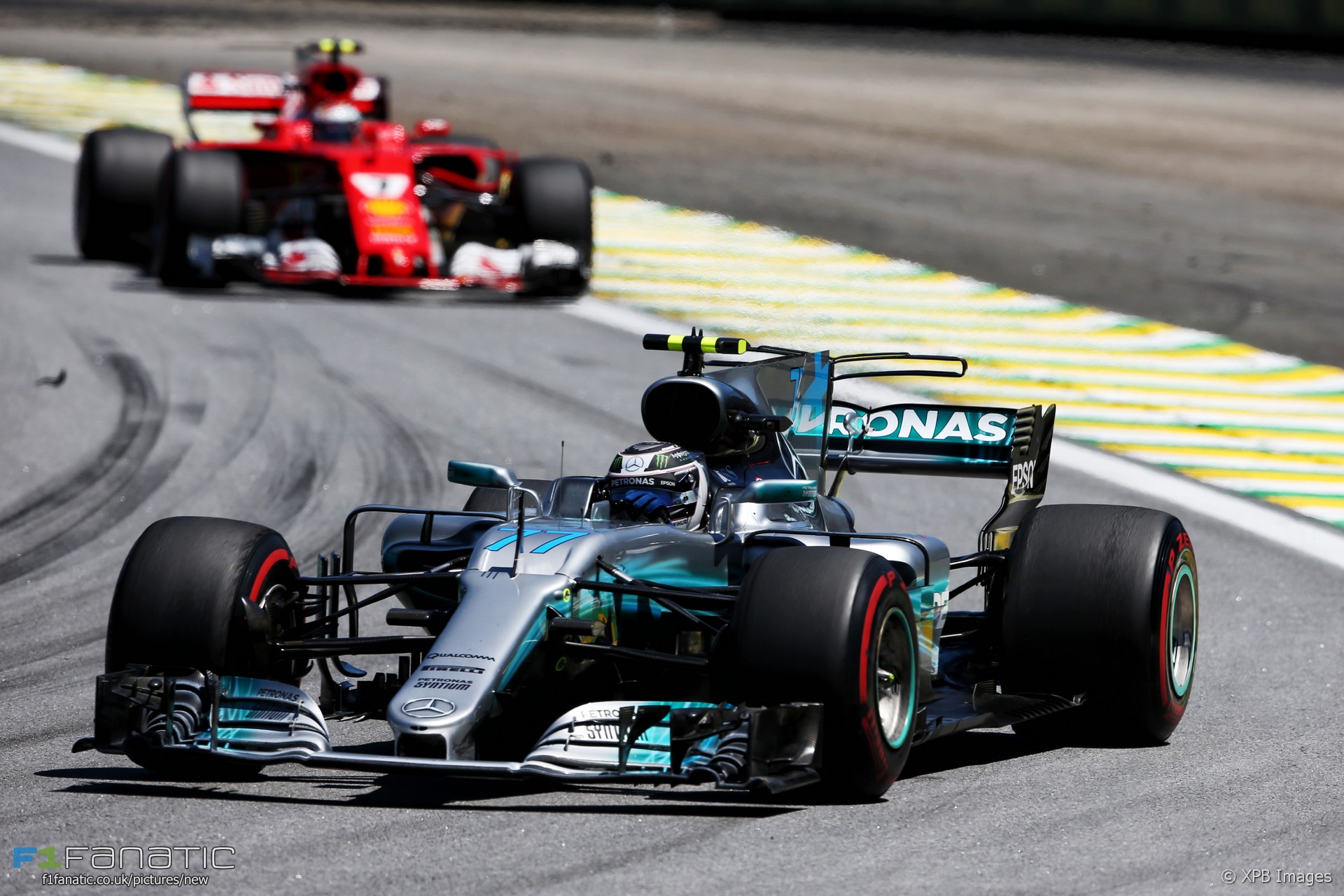 Mercedes have been the team to beat since the current V6 hybrid turbo power unit regulations arrived in 2014. But the 2017 season was the toughest fight they’ve had so far.

Ferrari began the year as a strong threat and faded only slightly in terms of outright performance as the year went on. And Red Bull, after a disappointing start to the season, ended the year in much better shape, vying for victories.

But as expected the overhaul in the aerodynamic regulations meant the smaller teams were left further behind, as this analysis of the performance data from the 2017 F1 season shows.

Scroll to zoom, right-click to reset

Outright one-lap pace remained the strongest part of Mercedes’ game in the fourth season of the current engine regulations. Their reputed ability to extract more power from their engine for individual bursts propelled them to 15 pole positions from 20 rounds.

But even this excellent record represented a significant softening of their previous dominance. In the 59 prior race from 2014 to 2016 they’d only been beaten on pure performance on three occasions (and one of those was because their drivers slipped up in qualifying).

Ferrari was the only team to beat Mercedes to pole position this year, doing so five times. And despite the growing threat from Red Bull in the second half of the season, they were never beaten on outright one-lap pace by the RB13s.

Race pace was often a different matter, particularly in the early races, when Mercedes fell prey to Ferrari’s superior tyre management over a stint. As the silver team got to grips with the W08, Ferrari became less of a threat in this regard. But even as they strengthened their position in the latter stages of the year there were still occasional races where they were simply outdone by their rivals in qualifying, notably in Mexico.

This trio monopolised the top three places in terms of outright performance all year long. As was widely expected, the new aerodynamic regulations helped the best-funded teams pull further ahead of the midfield.

Only one team made more progress than Mercedes, Ferrari and Red Bull in 2017. This was Renault, who posted the biggest year-on-year reduction in lap time at 14 of the 20 race weekends this year.

In the second full season of Renault’s return to Formula One as a full works effort the progress made by Renault’s strengthened and substantially enlarged team was obvious. However that progress wasn’t matched in another crucial area.

Technical failures, rather than driver errors, were the biggest cause of retirements for most teams. This was most obviously true of the Renault and Honda-powered outfits. Renault has targeted improved reliability as one of its key goals for 2018.

Note the data above refers only to occasions where drivers were not classified (completed less than 90% of a race distance) due to a car failure and can therefore under-represent the true extent of reliability problems.

It does not reflect reliability problems in qualifying, such as Sebastian Vettel’s in Malaysia. The ‘other’ retirements also include occasions where drivers did not start races, such as Kimi Raikkonen’s failure on the grid at the same round.

Teams performance and reliability in 2017

Bringing the data on reliability and performance together gives a good overview of the teams’ strengths and weaknesses. The more competitive each team was, the closer it appears to the bottom-left of the graph.

McLaren, who endured a third and final dismal year with Honda, should expect a significant gain in performance next year with Renault power. They will expect to move clear ahead of Renault and much closer to Red Bull. And if all three deliver on Renault’s anticipated reliability gains, the prospect of an even more competitive season will be good.

Use the control above to hide and show the data for different teams.

The four-year trend in team performance gives another illustration of how the ‘big three’ teams moved further clear of the midfield this year. This is a trend Formula One’s new owners are keen to reverse by reshaping the financial and technical regulations to level what is, at present, a very uneven playing field.

Sauber’s drift from the midfield pack in 2017 with its year-old Ferrari engines is also easy to appreciate. Reverting to current-specification Ferrari power (branded by Alfa Romeo) should help propel them back into the fight for points next year.

For the fourth year running Mercedes had the car to beat. But at long last this was a closer fight and the drivers in silver had to worry about their rivals from other teams much more often than before.