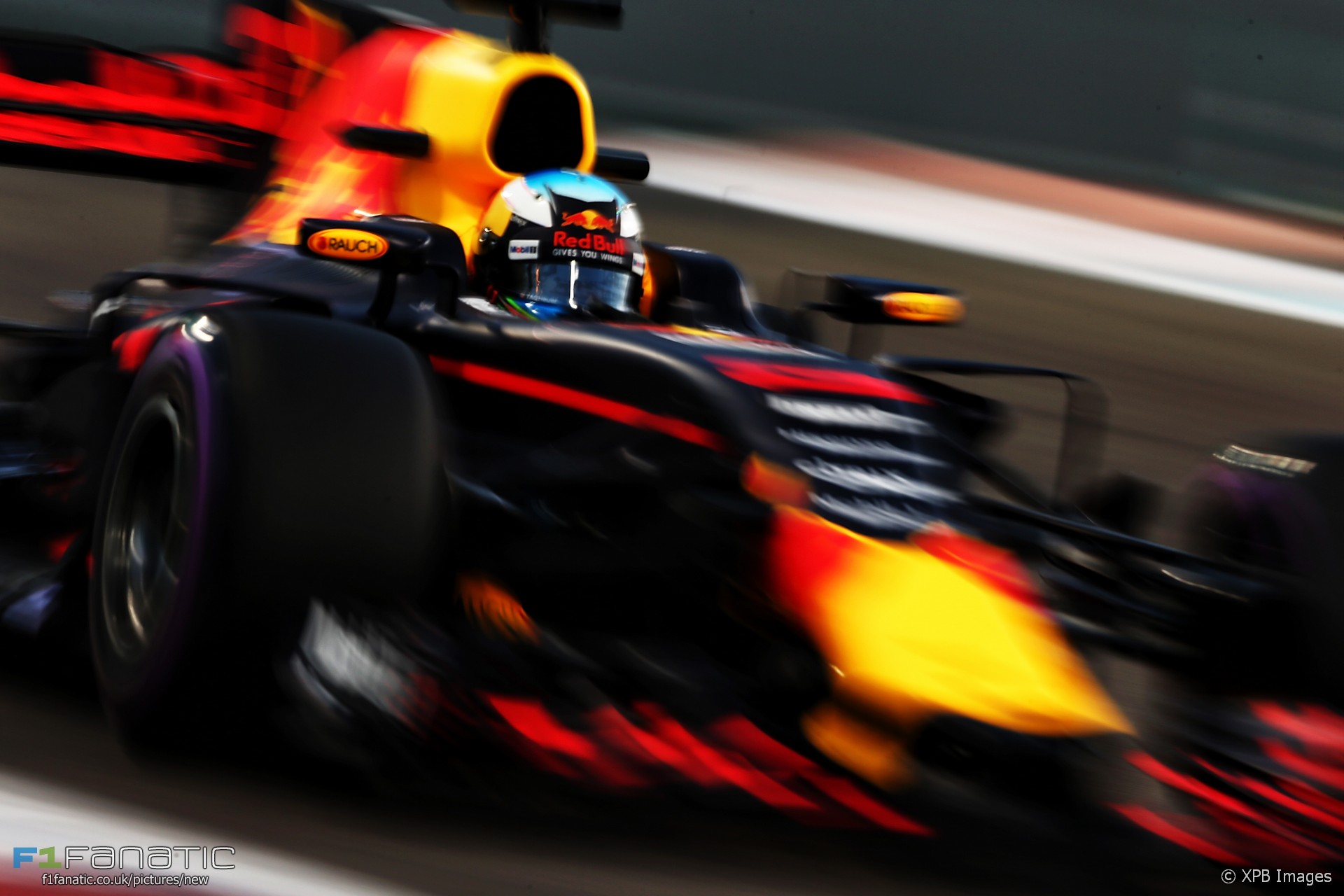 Daniel Ricciardo was frustrated at being held up by Romain Grosjean during practice for the Abu Dhabi Grand Prix.

Here are the team radio highlights from the first three sessions at Yas Marina.

To Bottas: “So box, box, box and just remember those cruises on the in-lap.”

Stroll: “Just make a note we need to fix the right mirror, it’s a bit too high. It’s OK for this session.”

To Hulkenberg: “Reminder that tyre temperatures and pressures are on the low side.”

To Vandoorne: “OK Stoffel push from seven to 11, stay off kerbs, no DRS.”

Hartley: “Struggling with the oversteer entry. Car’s very nervous at the end of brakes and at high speed.”

Gasly: “Basically the traction in the low-speed are a bit snappy. And when I go over the kerbs it just upsets all the car, it kind of puts me wider. The front is just kind of bouncing on the kerb and then afterwards when we’re at the apex it’s difficult for me to really use all the inside kerbs. And too much understeer in high speed as well, especially turn 20.”

“Stay out for one more timed lap, Max.”
Verstappen: “Yeah. I don’t have any feeling with this steering wheel, it’s so bad.”

Hartley: “Yeah disaster middle and last sector. First sector was up four-tenths.”
“Yeah copy that we saw that no worries.”
Hartley; “Yeah struggling big time with the rear entries and exits, also in high-speed.”

To Vandoorne: “Stoffel the wind is actually quite light in turn eight, sheltered by the grandstand. That snap wasn’t the wind.”

Hulkenberg: “I think the tyres are OK. Not too much of a flat spot. What do you want me to do this lap?”
“OK, push.”

Russell: “Could you let me know the reason why we lost the rear. I believe I may have clipped the outside kerb on entry.”
“There’s a large tail wind into turn 17. Giovinazzi spun there just 30 seconds before you did.”

Hartley: “I have a big snap of oversteer under braking for turn nine.”
“Box Brendon for front wing change.”

“Lance box and do the nose change please.”
Stroll: “I’d really rather stay out.”

Grosjean: “Yeah box I hit the wall so check the rear wing.”
“Box now.”
Grosjean: “Same snap as before, I don’t know where it comes from.”

Raikkonen: “OK there is a vibration on the tyres.”
“Understood, Kimi.”

“You will have Ericsson passing you, just watch your mirrors, he’ll be very close at pit exit. Ericsson I expect he’ll be on a hot lap. May be slow.”
Ricciardo: “Yeah I think he’s aborted it.”
“Understood. OK so do your own pace.”
Ricciardo: “OK that’s really hard to see. I don’t think I could have done anything to avoid it.”
“Understood. OK there have been some reports of a car laying down a little bit of oil. Just have a feel on this lap now.”

“How was the car on that run?”
Hartley: “Way too much oversteer entry and exit. Struggling big time with the rear.”

Verstappen: “I have no rear tyres left after turn 10. It’s really on the nose.”
“Copy.”

“Looking for time through turn one.”
Verstappen: “Yeah but the car is too neutral.”
“Understood.”

“OK mate we saw, looked like Grosjean got in your way. Take it easy, we’ll go for another lap.”
Ricciardo: “Nah he was good. He didn’t get in my way.”
“I’m not sure your sarcasm comes across very well.”
Ricciardo. Yeah. [Censored by FOM].”
“Understood.”

“Ricciardo is finishing his lap behind.”
Grosjean:” Too late, guys, too late.”

Grosjean: “What was that, mate? There is a stall on the car somewhere.”
“Yeah something’s unpredictable, yeah.”
Grosjean: “Check the vibration.”
“Wehrlein’s pushing. We’ll check the vibration. There’s a reasonable level of rear vibration not too high. See if it settles down. OK so we’re just looking into that rear…”
Grosjean: “Yeah the Wiliams was in front but there’s no reason.”
“Yeah understood.”

To Bottas: “Just be aware that you’re probably going to pick up a bit more overheating with this tyre.”

To Vandoorne: “Timed lap will be yellow G1.”

“Fernando is that OK?”
Alonso: “Yeah. Try to let some space to the car in front just to have a clean last sector.”

To Hartley: “OK you can push a bit in turn 20 to help the front left.”

Vettel: “Note that the car was generally pulling a little bit to the left on the straight.”
“Understood.”

Hamilton: “Vettel just went very wide at the exit of turn one. I don’t know it that’s allowed.”
“OK copy we’ll review. I think the opinion is the Astroturf should make it slower”
Hamilton: “He went way beyond the Astroturf.”

Hamilton: “Just make I note I went wide at turn five just in case Alonso was [unclear]. Picked up a lot of dirt on the tyres.”
“OK, copy.”

Grosjean: “Guys I won’t learn anything because of what we’re doing.”
“OK we’ve got plenty of time we just need to get stabilised engine temps.”
Grosjean: “Yeah but I’m not learning anything.”

To Ricciardo: “OK Virtual Safety Car, there’s an umbrella at the apex of turn eight.”

Magnussen: “There’s a nice shadow in turn 11 if anyone asks.”

Hulkenberg: “Oh Jesus, completely no brakes into turn one. Got quite a big flat-spot at the front-left now.”
“Understood.”

Verstappen: “Unbelievable. So difficult to drive. I’m coming in. It doesn’t make any sense.”
“You don’t want one more lap?”
Verstappen: “No I don’t.”

“Nico just be careful of cars coming past you as you enter the track.”
Hulkenberg: “Not much I can do, I can’t see [censored by FOM].”
“No problem.”

One comment on ““I’m not sure your sarcasm comes across”: Abu Dhabi GP practice radio highlights”