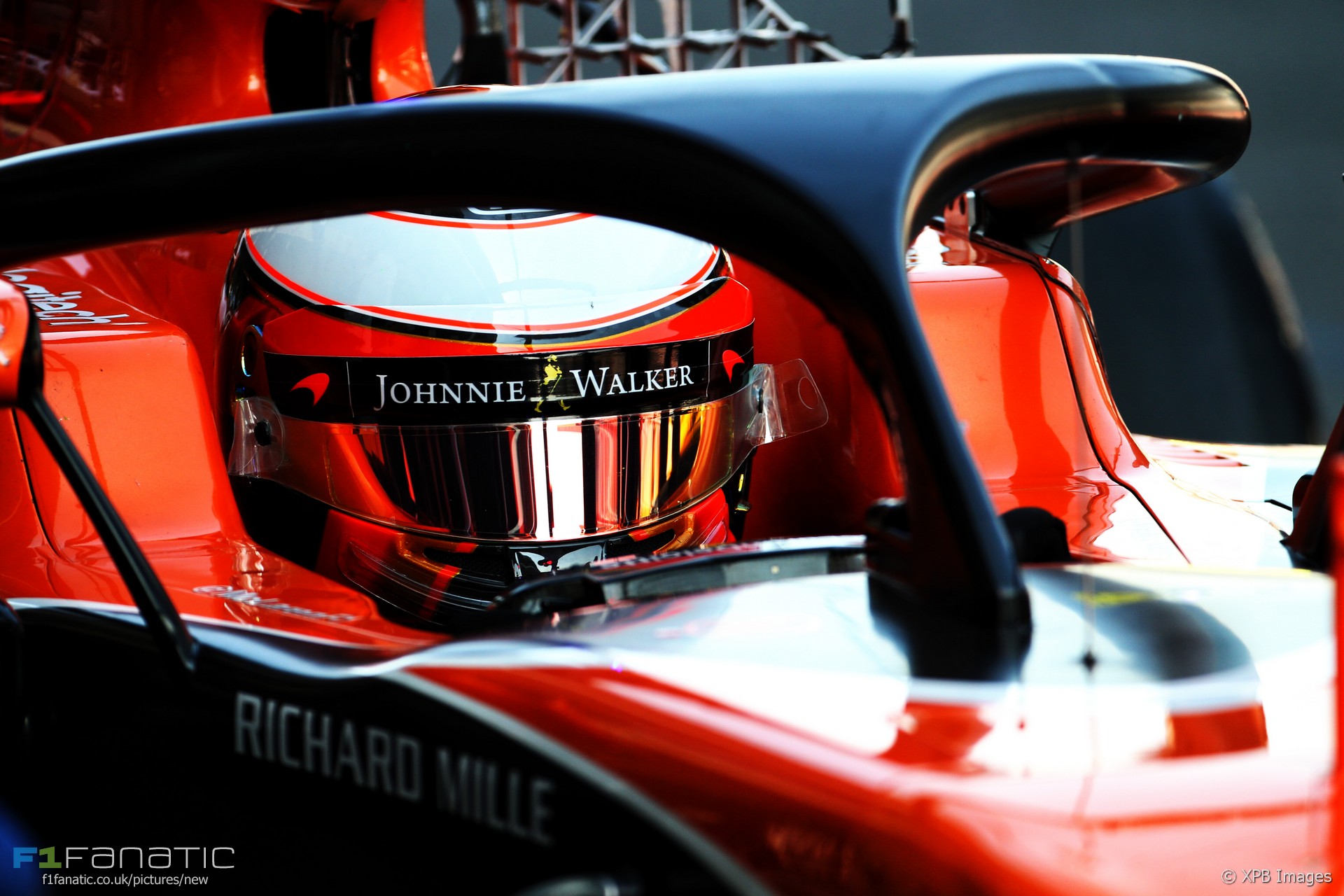 The face of Formula One will change forever after this weekend’s Abu Dhabi Grand Prix.

Open cockpits will disappear and, from the 2018 F1 season, the Halo head protection device will become mandatory. The cars will quite literally never look the same again.

The championship has changed in many profound ways since it began in 1950. Not every watershed moment was recognised at the time for what it was. But from becoming a worldwide championship to ending the tyre war, these moments shaped what the sport has become today.

The original world championship calendar of 1950 was, realistically, a six-round European Formula One season with the Indianapolis 500 thrown in. The great American race was run to a completely different set of rules and no F1 drivers ventured across the Atlantic in search of the extra eight points on offer.

But for a few exceptions, this remained the case as the race remained on the calendar throughout the fifties. The championship was slow to expand beyond Europe: Argentina became a fixture after its first race in 1953 but the 1958 season finale in Morocco proved a one-off.

Then as now the United States was the country the sport obviously needed to be in but was struggling to crack. The addition of a proper United States Grand Prix in 1959 was a step in the right direction, and though it took a few years to find a regular home, after 1960 it was clear the Indy 500 was no longer needed to prop up the claim of being a ‘world’ championship.

Meanwhile another profound change was happening in the championship. Several early races had run up to distances of 500 kilometres and could take over three hours to complete. But gradually the series was transitioning towards what we now recognise as a typical F1 race length.

The current upper limit of 305 kilometres (with an exception for Monaco) didn’t arrive until 1989. But prior to that the rules gradually required shorter and shorter races.

The last 500 kilometre race was held at Monza in 1960: 50 laps of the 10-kilometre configuration of the circuit which included the daunting oval. Several British teams were unhappy with the decision to use the oval course and stayed away, handing Ferrari their sole victory of the season on home ground.

Phil Hill’s triumph in Ferrari’s dated 246 chassis was also the last time a front-engined car won a Formula One race. Ferrari had resisted the innovation despite Jack Brabham steering his rear-engined Cooper to championship victory the year before.

1973: Last race with three cars on the front row

A few weeks ago Formula One’s new owners floated the idea of changing the grid format for F1 races. One change could be to allow three cars per row of the grid, something which hasn’t been seen for more than four decades.

Ronnie Peterson’s Lotus and the Tyrrells of Jackie Stewart and Francois Cevert were the last trio of front-row starters in F1 history at Zandvoort in 1973. After that the two-by-two rows we’re familiar with today were enforced at every round.

From 1980 the rows were staggered so that each driver started an equal distance ahead of the next car behind them. It’s been unchanged ever since.

1976: Last race on the Nurburgring Nordschleife

Safety is the motive behind the introduction of the Halo and the same priority was behind a series of changes to racing circuits in the seventies. However one track simply couldn’t be tamed: Germany’s daunting Nurburgring Nordschleife.

Not that they didn’t try. In 1970, pressured by the threat of a strike from drivers, the race was moved to the Hockenheimring while major work was done to ease the track’s bumps and jumps and install barriers along its 22-kilometre length. The race returned the following year.

But its size and speed meant it remained a uniquely dangerous place to go racing. The sheer length of the track made marshalling difficult and expensive. Niki Lauda’s horrendous, near-fatal crash in 1976 made that clear, and afterwards F1 never raced on the long version of the track again. It sent an unmistakable message that safety was no longer something which could be compromised on.

1976: Last race Ferrari did not enter

With Lauda clinging to life after his Nurburgring crash, Enzo Ferrari initially announced his team would quit racing. Team manager Daniele Audetto urged that the next race in Austria should be cancelled. When it went ahead, Ferrari stuck to their promise not to enter.

It wasn’t until the eighties that teams were required to participate in every round of the championship (with some exceptions, as was the case with Caterham in 2014). Before that Ferrari, well aware they were the star draw, habitually skipped races when suited them, often blaming some kind of dispute with the mechanics.

This proved the final time they stayed away from a round of the world championship. However that hasn’t stopped them from making threats about not participating in order to get their way.

Today ‘F1 race’ and ‘championship race’ means the same thing. But it wasn’t always the case. After the championship was formed in 1950 many non-scoring races continued and often outnumbered the races which counted towards the title.

However the growing significance of the championship and the increasingly tough requirements for circuits wishing to hold grands prix led to a decline in non-championship rounds. Of the three non-points rounds held in the 1980s, two of those came about due to political rows in the sport (Spain 1980 and South Africa 1981). The final non-championship race was held at Brands Hatch in April 1983, and won by Keke Rosberg for Williams.

Is this another relic from F1’s past which could return? Ross Brawn said earlier this year he would like to run a non-championship race in order to test changes to F1’s race format before introducing them to the championship.

Along with requiring teams to enter every race, the eighties saw the introduction of rules limiting them to no more than two cars per grand prix. In the fifties and sixties it had been common for the top manufacturer teams to enter four or even more cars for some rounds.

The last teams to show up with three drivers was Renault at the 1985 German Grand Prix. In addition to regulars Derek Warwick and Patrick Tambay in the latest cars, Francois Hesnault piloted a one-year-old chassis equipped with an innovation: an onboard camera. Unfortunately it stopped after eight laps with a dead clutch.

Single-car teams were still allowed until 1990 but since then two-car entries have been the norm. However exceptions to this requirement have been allowed, for example when Marussia were allowed to run a single car at Sochi in 2014 following Jules Bianchi’s crash.

From a peak of 39 cars in 1989, the rising cost of competing in Formula One plus an economic downturn in the early nineties saw grids shrink dramatically. By 1995 the entry had fallen by one-third, meaning only enough cars were turning up to each round to fill the grid.

With the collapse of Simtek following the 1995 Monaco Grand Prix F1 fell under grid capacity of 26 cars and has never risen back to that level since. The sport’s new owners have said they want new teams to come into the sport but it may take until the technical rules are revised in 2021 for that to happen.

At the 2006 Brazilian Grand Prix all eyes were on Michael Schumacher who, on the verge of retiring from F1 for the first time, was striving in vain to prevent Fernando Alonso’s near-inevitable championship triumph. Alonso sealed the title with second place but Schumacher fought a stirring recovery drive to claim fourth.

Schumacher was aided the competitiveness of his Bridgestone tyres. The Japanese manufacturer was determined to win its final battle with French manufacturer Michelin, which had beaten it to the championship silverware for the second year running. It did, courtesy of Schumacher’s team mate Felipe Massa.

Indeed its rubber was so competitive that one of Super Aguri’s four-year-old ex-Arrows chassis finished tenth in the hands of Takuma Sato, ahead of a Red Bull and both Toro Rossos. Sato’s team mate Sakon Yamamoto set the seventh-fastest lap of the race.

The FIA’s decision to move to a single tyre supplier meant this was the final ‘tyre war’ race. It was also the last time different engine specifications competed in the same F1 race. V8s had been mandated for 2006 but Toro Rosso had been given a dispensation to continue using a detuned Cosworth V10. The ten-cylinder wail was gone for good once Vitantonio Liuzzi crossed the line in 13th place.

Teams had been allowed to refuel their cars in the early years of F1. It came back in vogue when Brabham hit upon the idea in 1982 as a means of getting more fuel into their third BMW turbo. Banned after 1983 on safety grounds, 11 years later it was reintroduced in the hope it would ‘improve the show’ – and keep Ferrari happy.

Whether it did or it didn’t is a subject which arouses considerable debate: Cries of ‘bring back refuelling’ from some prompt groans of despair from others. Regardless, it was ditched at the end of 2009 as the expense of hauling refuelling rigs around F1’s increasingly global calendar and those persisting safety concerns had turned enough of the paddock against it.

The final race to feature refuelling stops was the 2009 Abu Dhabi Grand Prix. When Jarno Trulli left the pits on lap 42 the refuelling hoses were put down for the last time.

The current engine format is wedded to the idea of limiting how much fuel each team can use. That being so, it’s hard to see how refuelling could return to F1 any time soon.