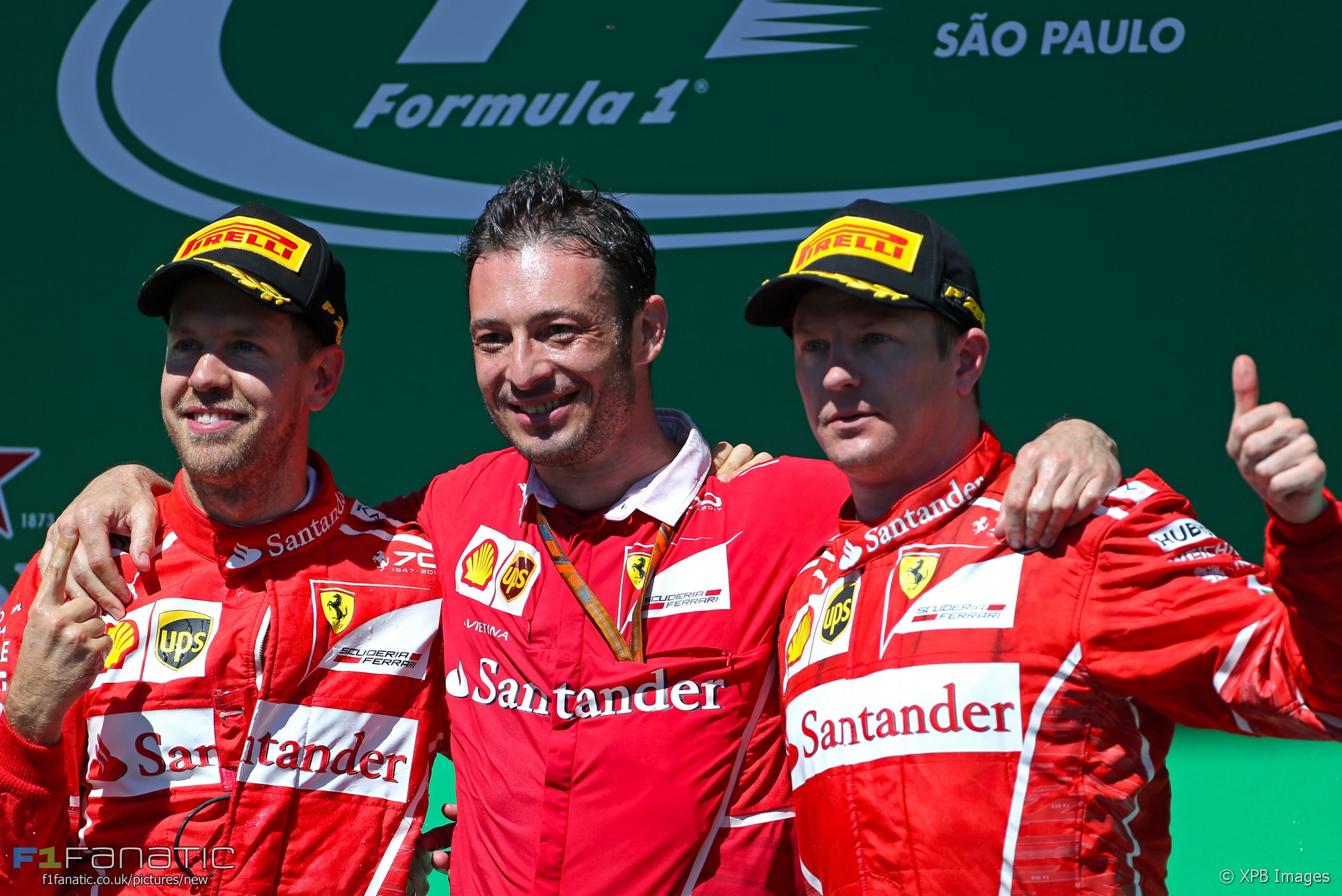 Kimi Raikkonen notched up his seventh podium finish of the season in Brazil. But while team mate Sebastian Vettel won the race, his fifth victory this year, it’s been a win-less campaign so far for the 2007 world champion.

Raikkonen hasn’t stood on the top step of the podium since the opening race of 2013. Since then he’s made 21 visits to the podium, all in second or third position. This is a record, five more than any other driver in F1 history:

Most consecutive podiums without a win

Raikkonen’s podium was the 91st of his career. Vettel scored his 98th, which moves him ahead of Fernando Alonso into fourth place on the all-time list.

It was Vettel’s 47th win and it means Ferrari now have 47 more wins than F1’s next most successful team, McLaren. It was their 11th Brazilian Grand Prix win, one less than the record which is held by McLaren.

This was the eighth race Mercedes failed to win this year. Though they’re still the team to beat it’s another sign that the fourth year of the V6 hybrid turbo regulations has been the toughest yet for them: They’ve lost as many races in 2017 as they did in 2014, 2015 and 2016 combined.

Vettel added to his collection of near-misses on Saturday when Valtteri Bottas beat him to pole position by 38 thousandths of a second. He also narrowly missed pole in Spain (by 0.051s to Lewis Hamilton), Monaco (by 0.043s to Raikkonen) and 0.042s in Austria (to Bottas).

Max Verstappen took the fastest lap of the race, establishing a new lap record. It’s only the second fastest lap of his career, both of which have come in the Brazilian Grand Prix.

Hamilton’s qualifying crash meant he had to start from the pits. Having effectively lined up 20th, he emulated Vettel’s 16-place climb to fourth position which is the most places any driver has made in up a race all year long. He scored points for the 24th race in a row, tying the second-longest streak of all time with Michael Schumacher. He needs three more to reach the all-time record held by Kimi Raikkonen.

However Esteban Ocon’s record of most consecutive finishes from the start of an F1 career came to an end when he was taken out by Romain Grosjean on lap one. Incredibly, this was Ocon’s first retirement in any series since his race-stopping collision with Tom Blomqvist at the start of the 2014 Macau Grand Prix. Since then he had done 45 single-seater races without retiring: An entire 18-race season of GP3 plus his first 27 F1 races.

Renault’s power unit problems and their troubled relationship with Toro Rosso was a major talking point ahead of the race. No driver had been hit harder than Brendon Hartley, who in his three-race F1 career to date is yet to start a grand prix without having taken a power unit grid penalty.

Have you spotted any other interesting stats and facts from the Brazilian Grand Prix? Share them in the comments.

41 comments on “21 podiums without a win: Raikkonen extends his record”