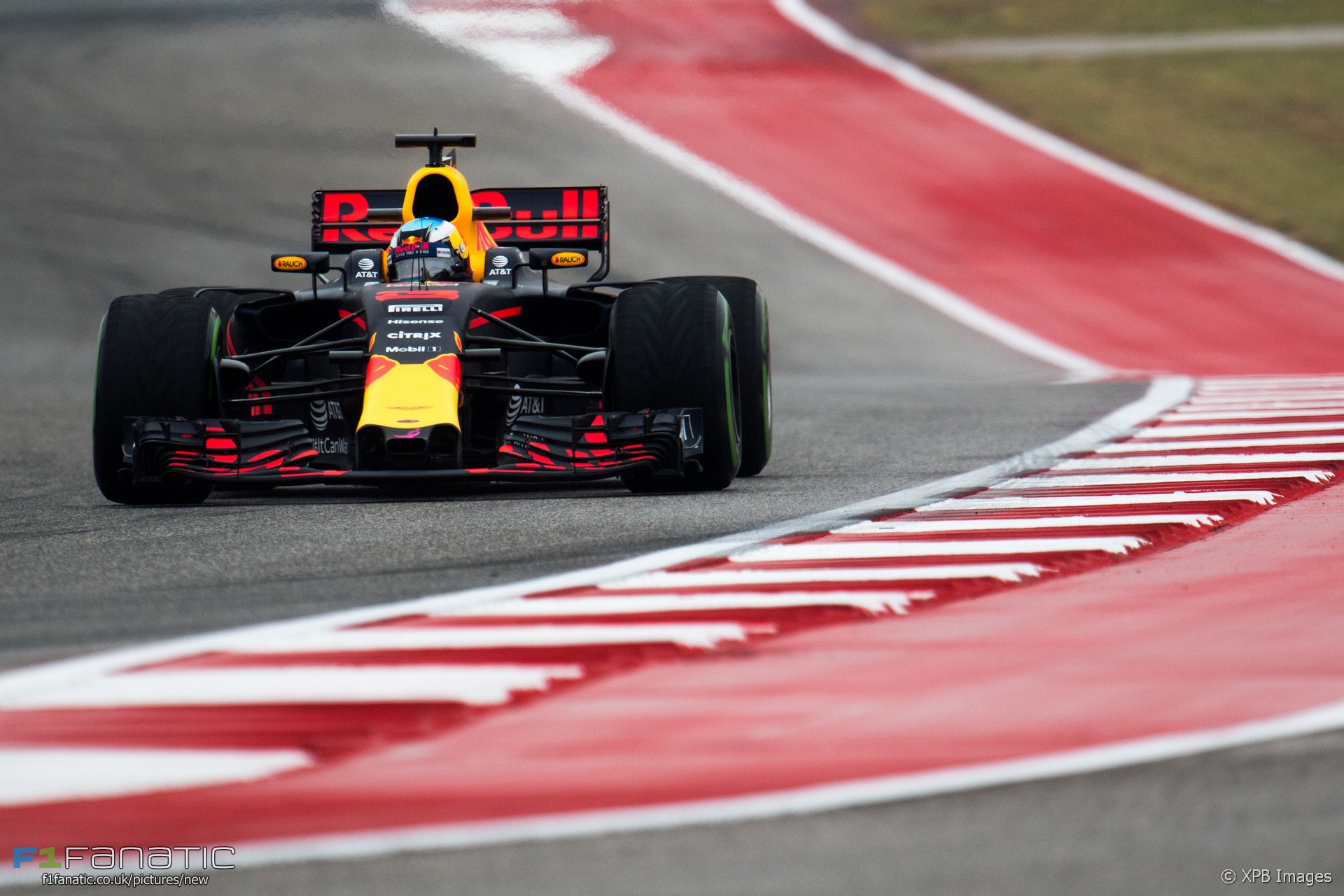 Slippery conditions caught some drivers out during the first practice session at the Circuit of the Americas. Meanwhile Brendon Hartley was getting used to life as a Formula One driver at Toro Rosso.

But it was the bumps which caused Daniel Ricciardo the most aggravation. He joked he thought he’d “broke his back” after running over some of them at the end of practice.

Here are the highlights of what drivers had to say during practice.

Hartley had problems with turbulence affecting his crash helmet during first practice. Other teams had problems recognising who he was.

To Hartley: “We are going to put the windscreen now to help you for the next run, OK?”

To Raikkonen: “Gap in front 38s to Vandoorne. Gap behind 42s to Haryanto. I don’t think it’s him actually. Sorry, it’s the Toro Rosso.”

Vettel: “I have quite a bit of vibrations on this set.”
“Understood.”

Hartley: “The only problem I have is the helmet is still lifting. If it’s possible to make a change on my helmet, would be good.”
“I don’t think we have time before the end of the session, Brendon.”

Vettel: “I think you saw there was an issue closing the lap.”
“Copy that.”
Vettel: “Is there some rain in the air?”
Yeah there is. Hamilton spun last corner so watch out.”

Gelael: “Stroll blocked me in a the last sector.”
“Understood.”

Vettel: “OK Magnussen is doing a bit of a hero thing so he will probably block us.”
“OK slow down.”

Kevin Magnussen had a high-sped spin, then got on his team mate’s nerves.

Magnussen: “Can he get out of the way please?”
“He’s trying to open a gap to launch for the next lap.”

Vettel: “Yeah I think you saw that.”
“How is the helmet now?”
Hartley: “Still lifting a little bit, but it’s a lot better than before.”

Stroll: “Is Bottas pushing?”
“Bottas is pushing.”
Stroll: “[Censored by FOM] hell. I tried to move out of the way on the outside. Too much traffic. And also the rear is terrible.”

“How was the front wing level?”
Alonso: “It was about right. There is a lot more to come. We had terrible preparations for the lap. But anyway we try more and we see what happens.”

Grosjean: “[Censored by FOM] I can’t do anything, sorry.”
“It just won’t turn, no?”
Grosjean: “That one turn, massive, massive.”
“A big chunk of aero balance would be the right fix, you think?”
Grosjean: “Yeah I think so.”
“OK.”

Grosjean: “[Censored by FOM] me. What is Kvyat doing? Cannot let me by in the last two parts.”

Both the championship contenders had problems to worry about at the end of the session. Ferrari decided to take a closer look at Sebastian Vettel’s.

Hamilton: “Big de-rates.”
“HPP ten to five. We have a report of debris exit of the last turn, just need to stay wide.”

Vettel: “Check the pass. Seems a little bit strange around the zero position.”
“Understood.”
Vettel: “Yeah something weird with the front axle.”
“OK so box Sebastian. We’re going to check the car.”
Vettel: “Copy. Feels a bit like jelly in the front.”

Red Bull asked both its drivers to try running off-line on their final in-lap to assess how severe the bumps are. The Circuit of the Americas’s owners had tried to ease them before the race weekend.

“OK Daniel drive on the left side of the track please.”
Ricciardo: “I think I’ve broke my back.”
“OK thank you understood, good data.”