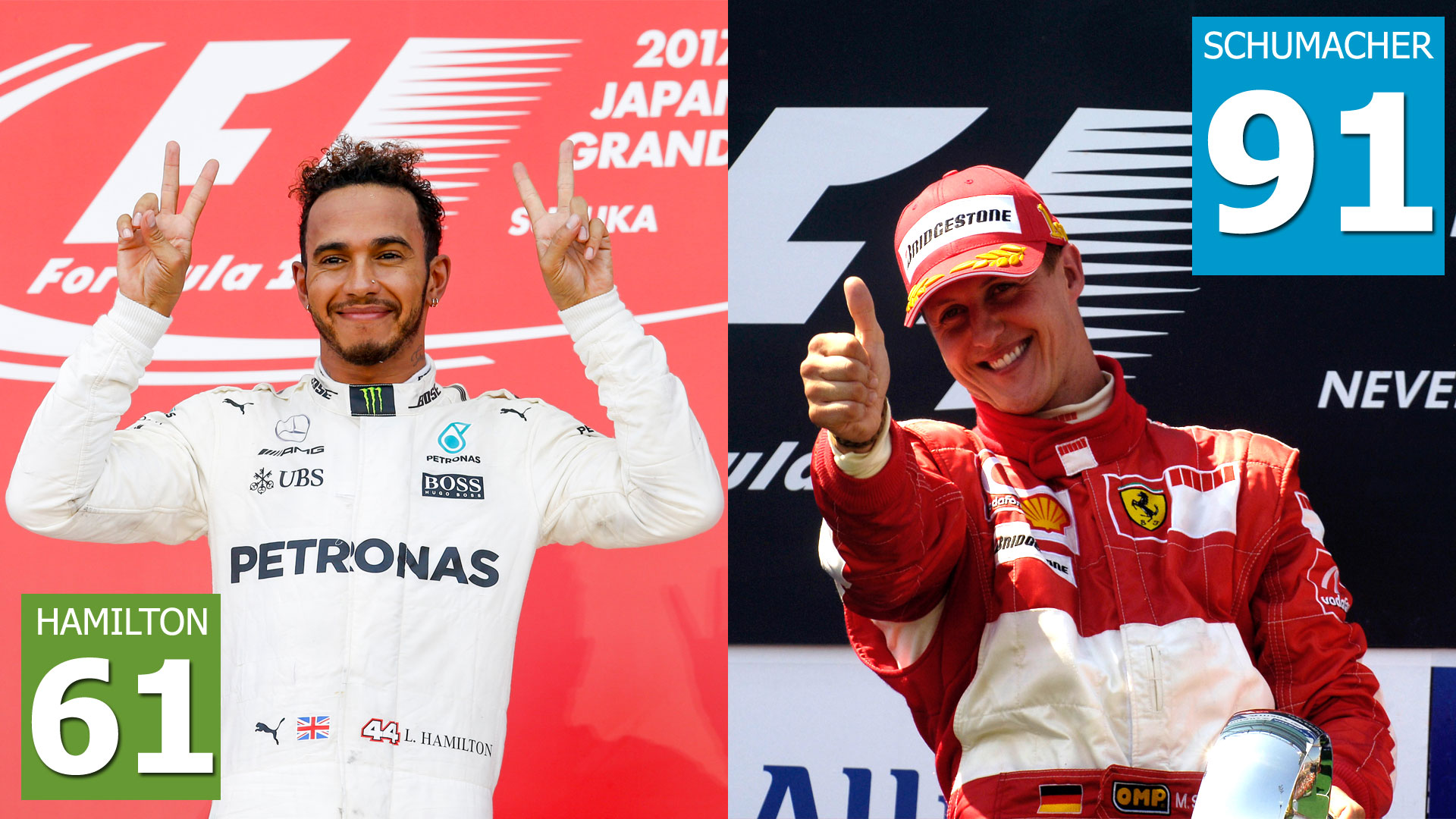 Surely the most bizarre stat from the Japanese Grand Prix was the symmetry between Lewis Hamilton’s pole position time and race-winning time.

On Saturday he did one lap of Suzuka in one minute, 27.31 seconds. The next day he completed 53 laps in one hour, 27 minutes and 31 seconds. Throw in the fact that 1+27+31 equals 59, which is Hamilton’s championship lead over Sebastian Vettel, and it’s enough to make your head explode.

The championship has swung dramatically in Hamilton’s favour. Sunday was the second time in three races he’d scored a maximum, 25 points while Vettel came away with nothing.

It’s reminiscent of the huge points swing which cost Hamilton the championship ten years ago, when a win was worth ten points and Kimi Raikkonen came from 17 down with two races left to take the title. Cases like this give Vettel some cause for comfort.

There are many ways to illustrate how tough the last three races have been for Vettel. Perhaps the most striking is that in that time he’s scored just 12 points, the same as Stoffel Vandoorne.

But while Vettel has undoubtedly had a tough three races, it doesn’t tell the whole story in terms of the championship. He signed a new three-year contract with Ferrari ahead of the Belgian Grand Prix and since then has led exactly three laps.

Vettel has only headed the field in three of the last ten races and in two of those he was ahead for just three laps. Hamilton has now led more than twice as many laps as Vettel this year.

Hamilton piling up the wins

This was Hamilton’s 61st career win, leaving him 30 shy of Michael Schumacher’s all-time record of 91. His last 30 wins have come over the course of the last two years and 341 days. If he continues at his current rate of victories, Hamilton could tie with Schumacher some time in late 2020.

The chances of him reaching that goal are not entirely unrealistic. The technical regulations are unlikely to change in any significant way in this time meaning Mercedes are likely to remain competitive.

The biggest question may be whether Hamilton wants to continue beyond the end of his current contract, which expires after 2018. And, if he does continue, who his team mate will be.

Hamilton’s eighth win of the year means he has now won twice as many as Vettel and no one can win more races than him this year. More importantly, it means he can clinch the drivers’ title at the next race and Mercedes can win the constructors’ championship too.

Ferrari were leading the constructors’ championship ten races ago but now they face a growing threat from Red Bull who’ve out-scored them in all of the last three races. They are 92 points behind with 172 available over the remaining races:

Red Bull got both cars on the podium in the last two races, something they hadn’t done since the V6 hybrid turbo era began. They ended the V8 era with double podium finishes in each of the last three rounds.

Hamilton took his first Suzuka pole position at his ninth attempt on Saturday. He had three-tenths of a second in hand over team mate Valtteri Bottas, who wouldn’t have taken pole anyway as he had a five-place grid penalty.

Hamilton has now started from pole position at least once at every track on the calendar, and Baku remains the only venue where he is yet to win. Of course both of these stats will change next year with the addition of Paul Ricard to the 2018 F1 calendar.

His pole position lap of 1’27.319 cut 1.635 seconds off the previous track record. Curiously Raikkonen’s best lap of the race was exactly that much slower than the race lap record, which he set in 2005 with a lap of 1.31.540. The only driver to lap faster than Raikkonen in the race was Bottas, whose 1’33.144 fell well short of breaking his countryman’s 2005 record.

This was the first time Bottas has set the fastest lap in a race since he joined Mercedes. His only previous fastest lap came in the 2014 Russian Grand Prix for Williams.

For the third race in a row the qualifying battle between the Red Bull drivers was incredibly close. Max Verstappen prevailed in Singapore and Malaysia by 0.026s and 0.054s respectively but in Japan it was Daniel Ricciardo’s turn to shine, coming out ahead by 0.026s. This was despite the pair running substantially different downforce levels on their cars which meant Ricciardo was 4kph quicker on the straights but Verstappen gained almost all of that back in the corners.

Two drivers started their final races with their current teams last weekend. For Jolyon Palmer his 35th race for Renault may also have been his last in F1.

Carlos Sainz Jnr, who will take his place, bowed out of Toro Rosso after 56 starts for the team. He is their second longest-serving driver of all time with one more start than Sebastien Buemi and two less than Jean-Eric Vergne. However Daniil Kvyat will surpass the lot of them if he returns for the team next year.

While Sainz failed to score a point on Sunday Esteban Ocon did, making it his tenth points score in a row. He was also a classified finisher for the 25th race in a row since the beginning of his F1 career, equalling the record set by Max Chilton in 2014.

Have you spotted any other interesting stats and facts from the Japanese Grand Prix? Share them in the comments.