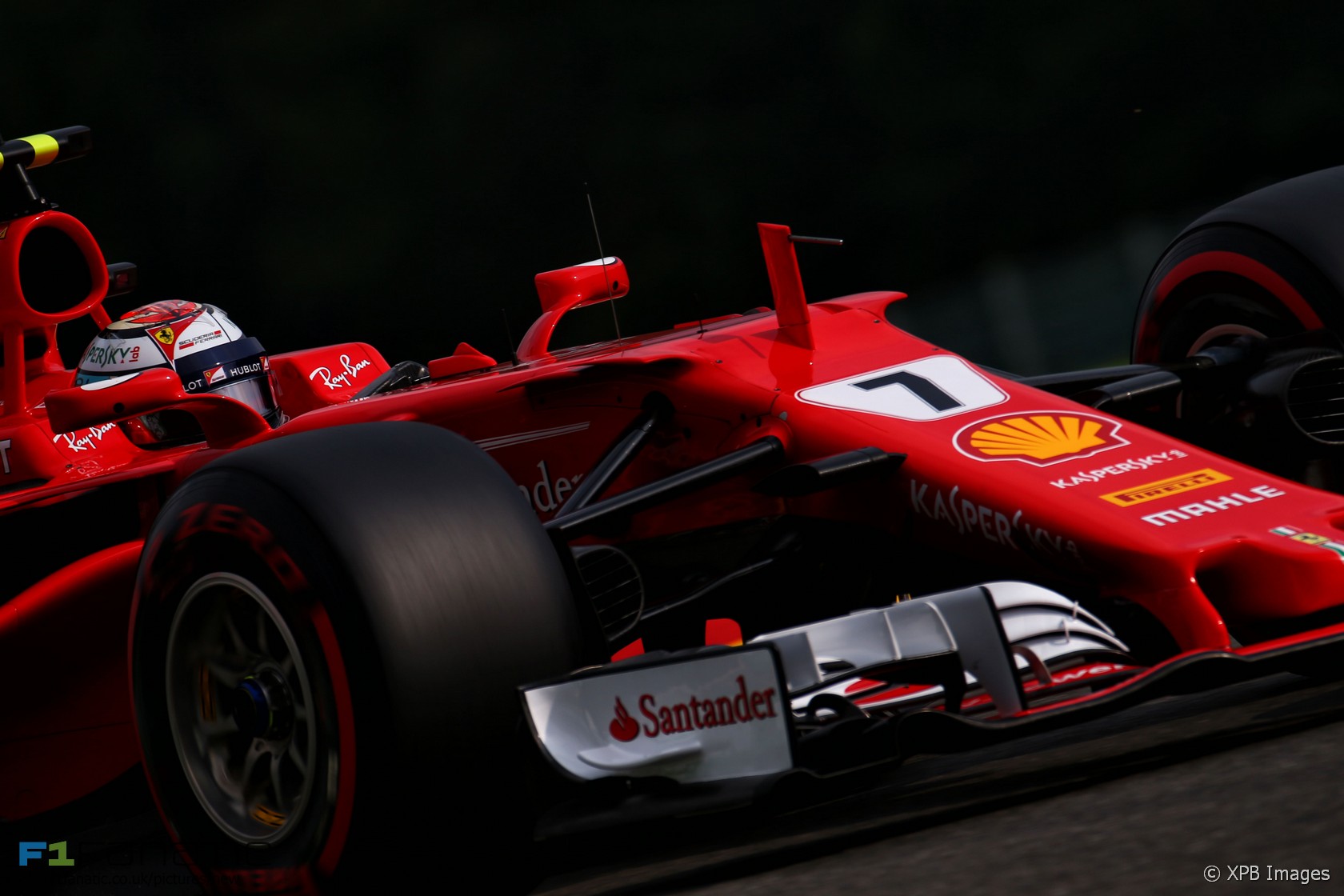 Sebastian Vettel thanked team mate Kimi Raikkonen for giving him a tow on his qualifying lap, and they weren’t the only team mates slipstreaming each other.

Raikkonen: “I have a massive vibration from the rear I think.”
“Understood Kimi, we’re checking now.”

“We see quite high frequency vibration laterally, Kimi. For us I would go for it, see what we do.”
Raikkonen: “And it’s from the tyres?”
“It’s an odd one, Kimi. Normally we would expect to see vertically, we see laterally.”

“Kimi we’re thinking of boxing due to this problem, was it bad on the lap?”
Raikkonen: “Yeah it’s just a little bit less but it’s not good.”
“OK copy. We’re P3 at the minute, we’re inside the cut-off. I think we box Kimi and we’ll see what’s going on with the rear.”

To Wehrlein: “Work a bit more the fronts.”

Grosjean: “I need some help I don’t know what happened in the last corner.”
“Yep we saw some rear locking, we’ll look at it.”
Grosjean: “OK. And poor aero balance it was very understeer initially.”

“Do you know what happened in turn one, Danny?”
Kvyat: “I don’t know I just had a strange… too much engine braking feeling.”
“How was the exit of the last corner?”
Kvyat: “[Unclear.]”

To Bottas: “OK Valtteri so we’ve got no telemetry.”

To Hamilton: “So this is potential race set. Just remember track limits turn four, no one’s been caught yet.”

Raikkonen: “I still have vibrations, little bit less. So something is not right.”
“Understood. We just have to make it through the session I’m afraid.”

To Vettel: “OK to box, we are safe, look after your tyres.”

Ocon: “I picked up a little bit of understeer in that one.”

Hulkenberg: “Definitely something not right with the rear.”
“Yep, OK Nico.”

To Hamilton: “And when you come into the pit if you stay in the fast lane as long as possible and pull into the box late, just to avoid all that red paint.”

“OK Stoff unfortunately Fernando’s car lost power so he’s just been knocked out. He’s P11. Hulkenberg just squeezed him out at the end. But thank you for your part in that, that was good/.”
Vandoorne: “That’s a shame. I think it was a good tow.”

Grosjean: “Ah it’s too far to get the tow. My mistake.”
“P12, 0.1 out.”
Grosjean: “No!”
“Yeah…”
Grosjean: “Ah, last corner cost me a little bit.”
“Definitely we lost point one something there.”
Grosjean: “Well good job everyone after yesterday I was not expecting us to be there. So good job, good recovery, proud of you.”
“So the last corner with Vandoorne, did he hold you up, can you describe it?”
Grosjean: “Yeah a little bit. He was coming to the box, I got pretty close to him and I lost the downforce. I lost some time there. It’s the data is one tenth, bit more than one tenth.”
“Clear in the data, yeah, absolutely.”

To Palmer: “Stop the car. Jo we lost gearbox oil pressure, sorry about that.”

“OK Lewis issue with the readings so just ignore those at the moment.”
Hamilton: “Can I reset them?”
“Negative, I think it’s an on-car issue.”
Hamilton: “Can you keep me up-to-date?”
“We’ve got the same information as you, you’re just going to have to do it by your preparation feel.”

Raikkonen: “I have again vibration.”

Raikkonen: “Yeah I [censored by FOM] it up.”

“And Sebastian just behind you now.”
Raikkonen: “I’ll try to give him help.”
“Copy, copy.”
Raikkonen: “OK you did a good job for him mate, you got him fastest that sector. Thank you Kimi.”

Perez: “Really poor grip this run.”
“Understood Checo, you’re not the only one. P8.”

To Verstappen: “That was a pretty good effort, mate. That was as good lap, mate.”

To Raikkonen: “Thank you Kimi.”