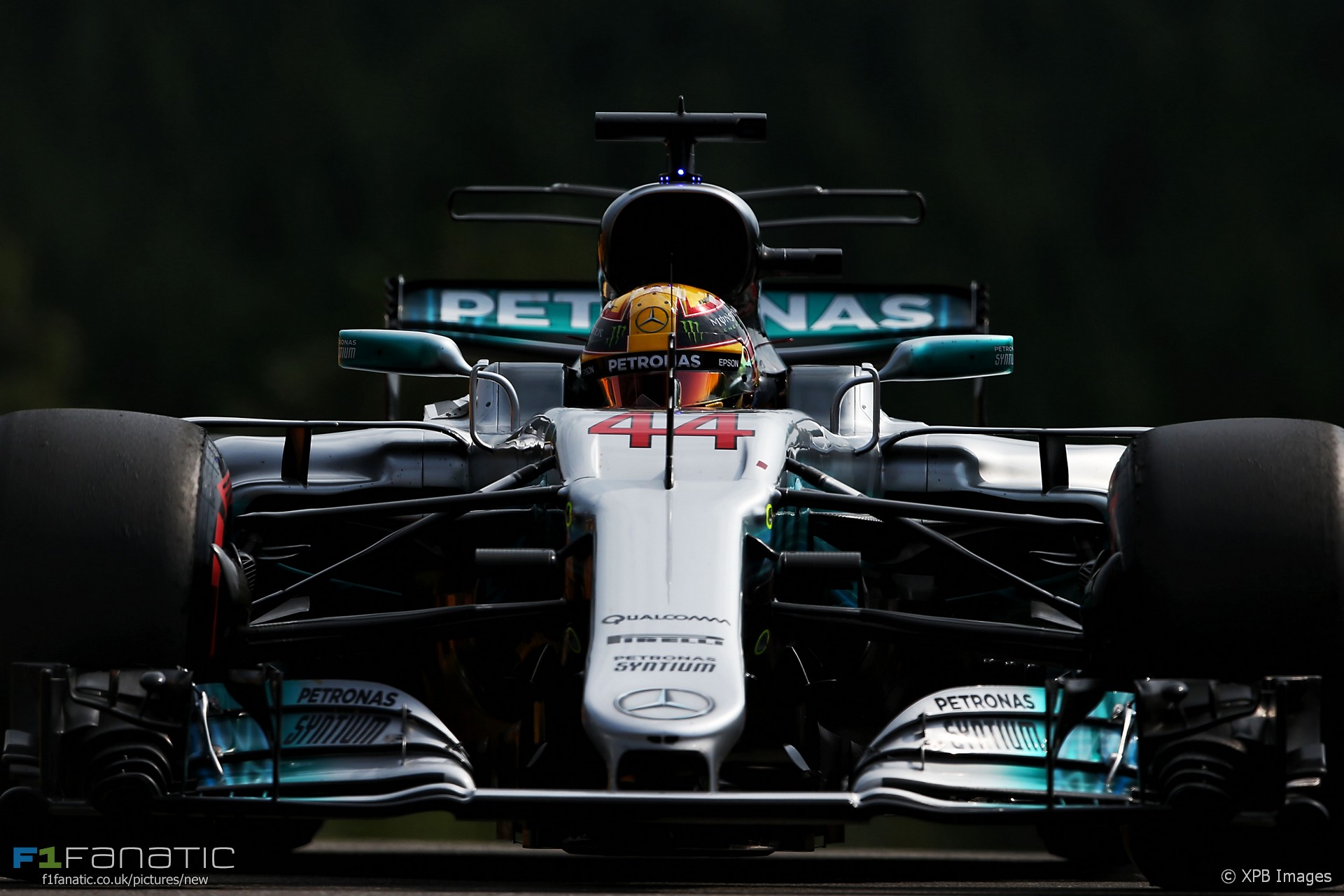 For the fifth time this year the top championship contenders Sebastian Vettel and Lewis Hamilton share the front row of the grid.

And, as on every previous occasion so far, Hamilton has the advantage of starting from pole position. But Spa is one of few circuits where it is potentially not as great an advantage.

That could be even more the case this year, as the increased performance of the cars means Eau Rouge can easily be tackled flat-out. That means the run from Eau Rouge to La Source on lap one tomorrow will be critically important, and could offer Hamilton’s rivals the chance to slipstream by on the approach to turn one.

Out-dragging a Mercedes is a tall order, of course. But remember Vettel did just that in Spain, one of the other occasions where the two shared the front row.

The concern for Vettel will be that Ferrari haven’t quite been on the pace of Mercedes this weekend and he hasn’t quite been a match for Kimi Raikkonen either. Raikkonen took second place with their first runs in Q3, then helped Vettel get up to second place by giving him a tow after apparently spoiling his final run.

However it has been a consistent feature of the season so far that Ferrari’s race pace is more competitive. Mercedes expect that to be the case again tomorrow.

Pirelli’s simulations indicate drivers who start the race on the ultra-soft tyre – which will include all the drivers from Q3 – would be best off to run to lap 14 before changing to soft tyres and running to the end. Those with a free tyre choice could use the super-softs at the start and run slightly longer.

Interestingly, both Ferrari drivers have kept a spare set of fresh ultra-soft tyres. This could give them a potential extra line of attack late in the race if they have enough of a gap to make a ‘free’ pit stop.

Mercedes are sufficiently concerned about Ferrari’s potential that they’ve taken it into account in their car set-up. “We have chosen a lighter wing level than them which will help us both attacking and defending in the first and third sectors,” said Shovlin. “But it will be a close battle – as we can expect for the rest of the year – and we will be fighting as hard as we can.”

Can Red Bull figure in the fight for victory? “I am positively surprised we are so close to Ferrari,” said Max Verstappen after taking fifth, a tenth of a second behind Raikkonen. “Lewis was way ahead but in the race I think we can be closer so perhaps a good result is possible.”

They too have kept another set of ultra-soft tyres in reserve and should have a good chance to use them at the end of the race as there is likely to be a big gap between them and the next car. However Verstappen needs to avoid a repeat of the first-lap incident which spoiled his last race – and his previous visit to Spa.

Will Hamilton take his third win at Spa and cut into Vettel’s lead? And will Raikkonen figure in the fight for victory following his strong practice pace.

Share your views on the Belgian Grand Prix in the comments.

14 comments on “Mercedes trim their wings to keep Ferrari behind”