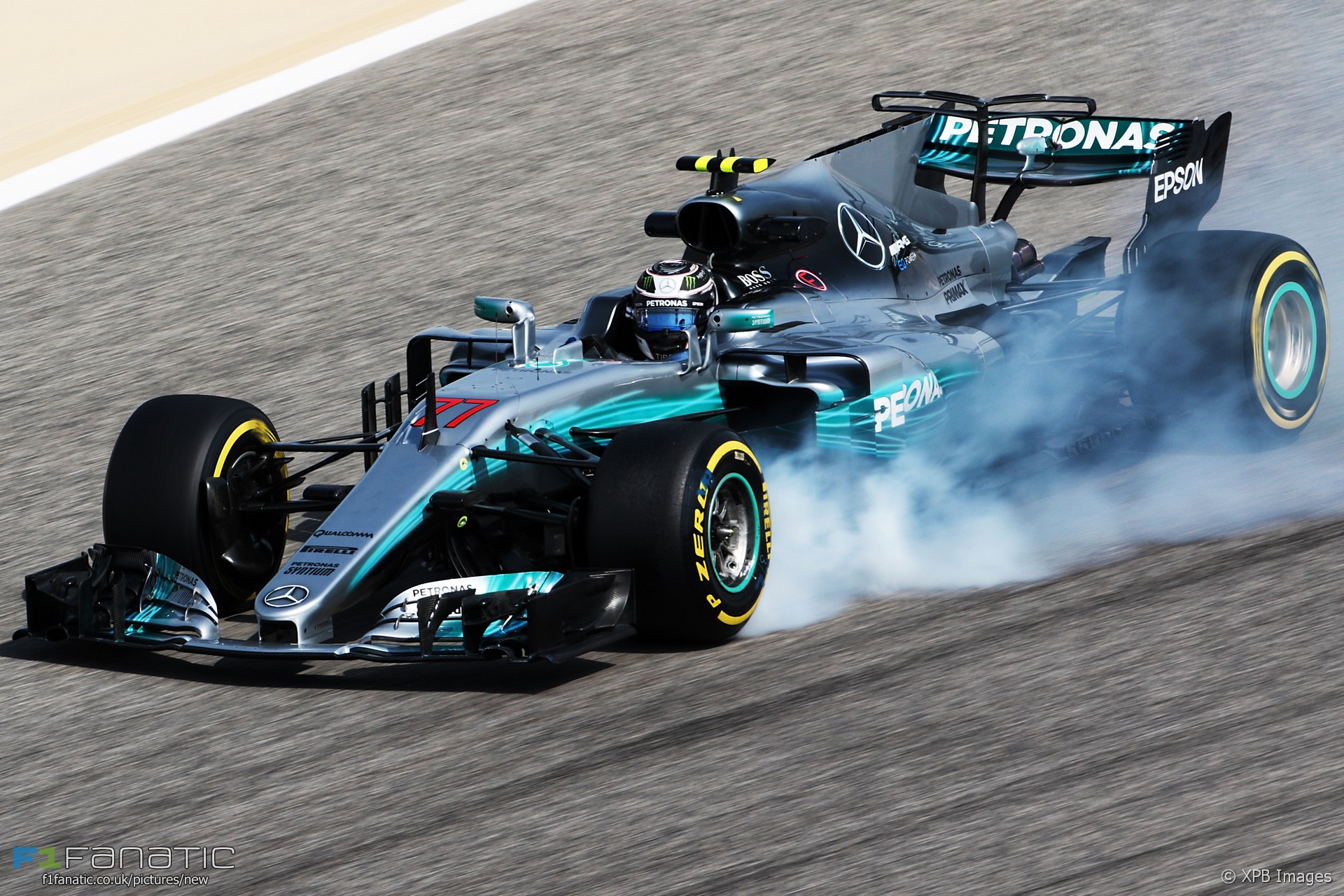 Here are the team radio highlights from the first two practice sessions at the Bahrain International Circuit.

With scorching temperatures making first practice unrepresentative of the race to come, teams concentrated on testing duties to begin with.

To Vandoorne: “Launch map on. This is a pit stop. Front wing adjust. Lay rubber from the stop. Look for Bottas, 11 second gap behind him.”
Ricciardo: “OK do you want me to stay in pedal 12?”
“Pedal two.”
To Ricciardo: “OK Daniel stop in the box…thank you. OK it’ll be another quick turnaround again.”

The Williams drivers were troubled by poor grip and other problems.

Stroll: “I keep getting the Safety Car, my dash goes yellow and says ‘Safety Car’.”

Massa: “It’s really terrible, the grip level is zero.”
To Massa: “I want you to manually cancel the DRS just before the braking zones.”

To Grosjean: “It will be a slow nose change because we need to connect some wires.”

To Ericsson: “OK Marcus we suggest on the next push lap to use the right-hand toggle for turn one.”

Esteban Ocon was irritated by his former team mate’s driving.

Vettel: “Do I get another one after this? Or I’m also happy to take a lap at speed and then box at the end of the lap? Or if that doesn’t work for you I’m also happy to back off in the last sector.”
“OK you can take one more if you need.”
Vettel: “Say again, I didn’t hear it.”
“I said that you can take more after the following if you need. Driver default one four on.”

“OK you can do one more push or you can box now. Either way cool the car.”
Grosjean: “Yeah I have no more deployment at the exit of the last coner.”
Yep Fabio sees it, OK
Grosjean: “Picked up quite a bit of understeer in six and seven.”
“Yep, more understeer, OK.”
Grosjean: “I haven’t got any precise test to do so I guess we can box and think about it.”
“Let’s box, we’ll work on the mas and things. See if we make a small bar change or something. So you can box.”

Life got worse for Massa at Williams.

To Bottas: “Practice braking for turn one again.”

After quick work by the Ferrari mechanics – including some from Vettel’s car – Raikkonen was out in time for the start of second practice.

To Magnussen: “Try higher gear in corner 12. We are losing performance.”

Vettel: “I think you saw. Struggling with the front end six and seven. The first was more limited.”

Vettel: “Not ideal with the traffic in the last sector both laps. Similar behaviour from the first to the second attempt.”

To Hamilton: “No one’s gone faster on their third lap. Suggest we just go through the pits rather than box.”

To Ricciardo: “Sainz is at turn 11, the fire extinguisher’s gone off in the car.”

Pascal Wehrlein was back in the Sauber but experienced a strange handling problem.

“So what is the reason exactly, Pascal? You have to keep pushing to make the tyres working. Describe the problem, please”
Wehrlein: “The front inside corner is in the air, every corner, even through high-speed.”

Stroll: “The radio is horrible, I can’t hear a word you say.”

Lewis Hamilton had a near-miss with Nico Hulkenberg which the stewards are investigating.

Hamilton: “These drivers are just so dangerous, man.”
“Look out for Valtteri behind. Copy that last message.”

Verstappen: “There was some stuff, I don’t know, a piece of carbon on the track in front of me and then Bottas backed out. They have to go quicker.”
“Confirm where the debris is, Max.”
Verstappen: “Turn 12, the fast right-hander.”

Raikkonen: “I have a lot of vibration in the brakes. I don’t know why.”
“Understood Kimi.”
Raikkonen: “I think it’s from the front, the tyres.”

Traffic, set-up and radio problems continued to vex some drivers:

Vettel: “OK down on upshift, second to third.”
“Copy that.”
Vettel: “OK we’re just [censored by FOM] around in traffic. What is the gap behind?”
“Perez three seconds behind. Then behind Perez is Hulkenberg. Then behind Hulkenberg is Kvyat.”