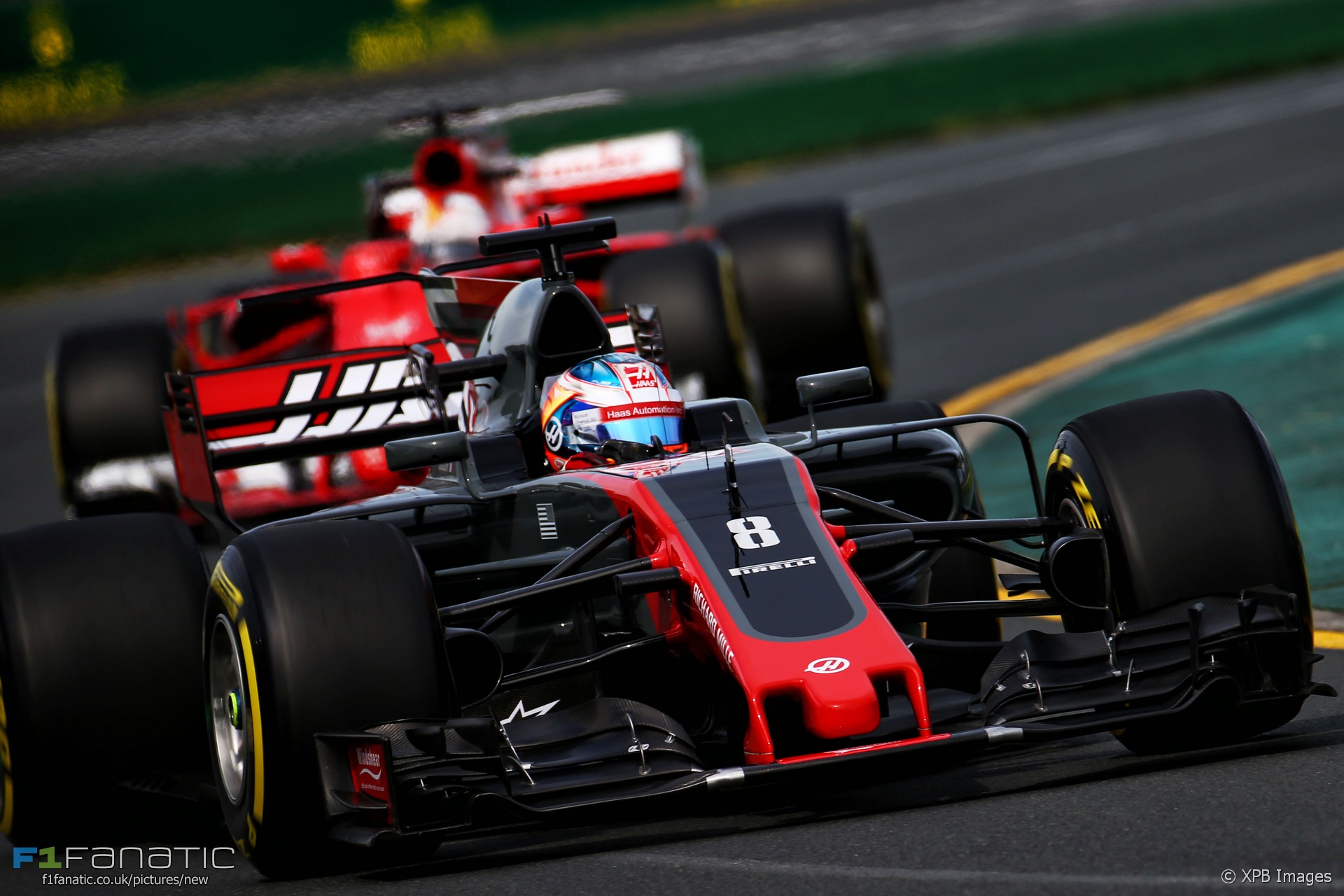 In the round-up: Romain Grosjean claims drivers are being subjected to cornering forces of almost 8G in high-speed corners this year.

Show which drivers and teams you are supporting

Which F1 drivers and teams are you supporting this season? Here's how you can show your support for your favourite on the grid on RaceFans:

"We are behind. It's lacking grip, lacking power. Bit of both. We have to work on the car. We need more downforce, we need more grip."

"Well, I received a text message this morning from Ferrari and my manager. Actually they informed me last night, but it was too late for me - I was already in bed - so I found out only this morning when I woke up. (laughs) "

Yusuke Hasegawa: "Of course a second team or third team, we have some conversations, but nothing is fixed."

Wehrlein confident he will be back for China (F1i)

"I'm going to train hard in Europe next week, and I'll be back in the car in China on Friday. Then we'll see."

"Practice ends early after Lance Stroll put his Williams machine into a wall on turn 10 not far from the hill. Some spectators sprint down to satisfy one of humanity's more primal urges: rubber necking a car crash."

"He said he goes to the office in London, early in the morning. 'I’m there until the evening,' remaining on call, 'waiting to see if they need any help,' although he said he does not hear much from the new owners."

"The cars are obviously a lot wider. Keep in mind the drivers are a sniff rusty, they haven’t done a first lap for a long time, so that’s interesting how that will turn out."

"The company will soon enough push motor sports towards American razzmatazz, driving it towards the new income streams of Internet technology that the new owners believe is untapped gold in motor racing."

Stroll crashes. On Oz TV, Alan Jones: "Can I have your credit card, dad?" Webber: "Williams will need a lot of spares this year." #F1 #AusGP

Lance has got the "I don't want to talk after crashing" look nailed already #F1 #AusGP pic.twitter.com/PBa7fEcxUb

1/2 Just got the answer to the question of how many more guest paddock passes teams have been provided with in 2017. Allocation doubled #F1

2/2 Number of guest grid passes per team increased by 5. Additional pass requirements can be submitted for approval. Huge improvement #F1

Not what I had in mind. Happens, fortunately not too often. I'll learn from it and turn tomorrow into something better

These new @F1 tyres have a very narrow, nasty slip limit on the rear it looks like. Once they go, there's no recovering it..

Tough Qualy as i struggled to find the right balance of the car but managed to put together a good lap in Q3. We will fight from p8 tomorrow pic.twitter.com/aFtzq2Dkh0

With Antonio Giovinazzi making a surprise grand prix debut today, the Italian has a fan in @mattypf1.

The thing I love about Giovinazzi is that I’m at Melbourne for the Grand Prix this weekend and the Melbourne Walk is where all the drivers and team bosses come down and sign autographs for all the fans overly keen to see their heroes. The event started at 10:30 and I got there 2 minutes late and inevitably paid the prices as there were so many people lining up waiting. But one thing I noticed is that there was only one person who was signing autographs for the fans as soon as the event started and that was Giovinazzi. He looked overwhelmed by all of the support and he looked he was having an amazing time gathered with the fans and since I’m a huge fan of his, being able to see him there was great for me. But after he moved down, no driver or team boss showed up until 11, so roughly 30 minutes after Giovinazzi was there. Now that is a personality.

And for his ability, it really does speak for itself. You have Palmer, Stroll, Magnussen and even Vandoorne (just a little bit here) struggling to get the most out of the car and how to take this beast properly but Giovinazzi had 3 hours of practice less than rest and his best time was fractionally slower than Ericsson’s and he almost made it to Q2 which is an amazing achievement for a last minute call up.

I seriously hope he does well in the race tomorrow because doing F2 again this year will just be bullying to the others because he proved himself worthy after his first year last year so I hope his race result tomorrow will lead to a drive as a replacement driver for either Wehrlein or Ericsson.
@mattypf1

On this day 20 years ago Lola finally abandoned its stuttering 1997 F1 programme due to a lack of funds. The team’s cars had failed to qualify for their first and only appearance in Australia 18 days earlier.