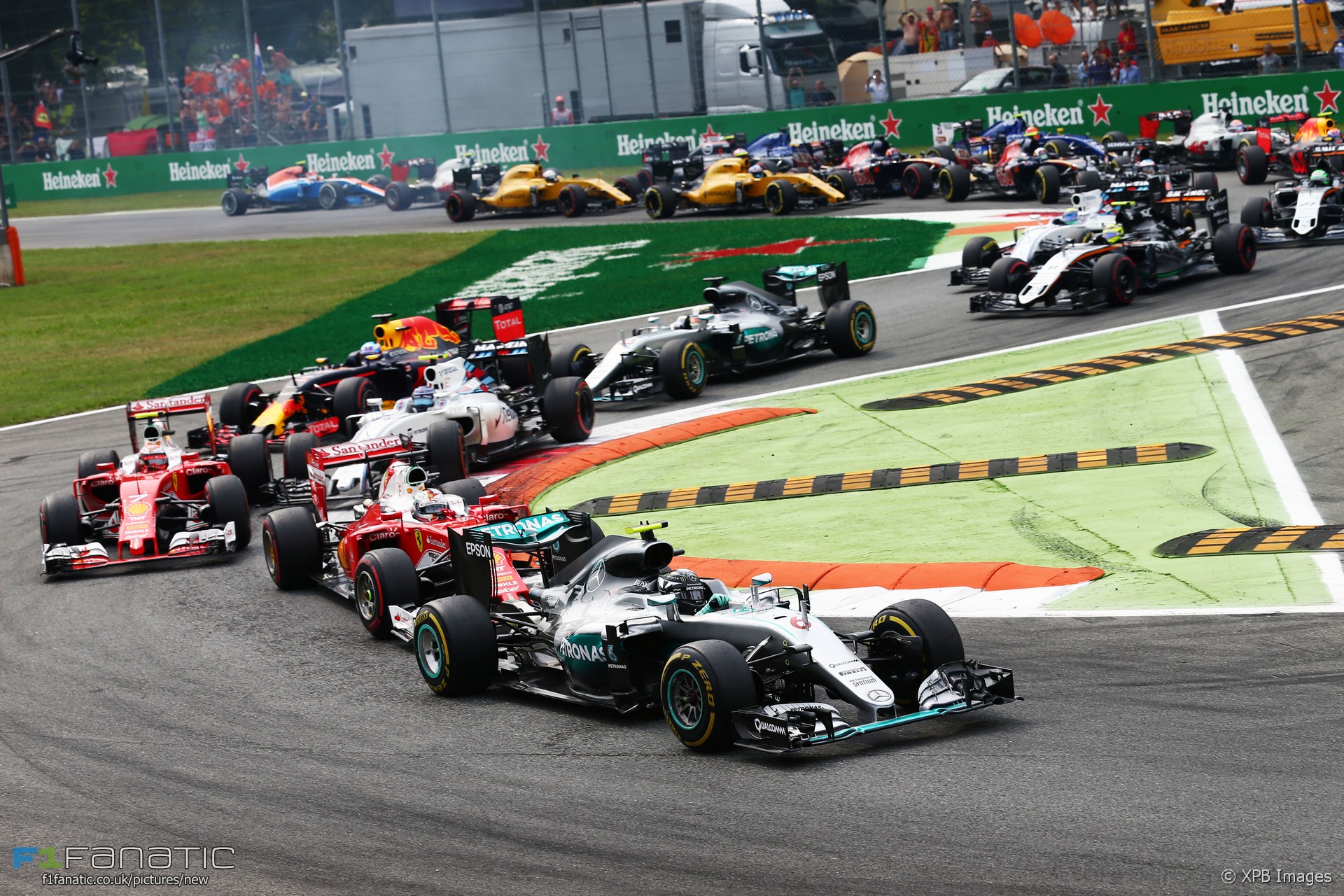 Only one driver got full marks for their performance in the Italian Grand Prix weekend. Here’s F1 Fanatic’s verdict on the full field.

Lewis Hamilton – Didn’t repeat his 2015 clean sweep of practice sessions but came close, and took pole with an impressive margin of almost half a second over Rosberg. According to Mercedes his stockpile of extra power unit components has not handed him a decisive performance advantage over Rosberg and the speed trap figures seem to bear that out: Hamilton was 2.5kph faster than Rosberg which bears comparison with what we’ve seen at other tracks this year. It all went wrong on Sunday when he started poorly, again. Although he passed Ricciardo and Bottas with little difficulty, and jumped the Ferraris with even greater ease, he couldn’t push on the tyres enough to catch Rosberg.

Nico Rosberg – Simply not on Hamilton’s pace in qualifying and admitted as much afterwards. If they were in slower cars there would have been several rivals between them on the grid. But they aren’t, so when Hamilton fluffed the start Rosberg was straight into a lead he never looked like losing.

Sebastian Vettel – His second run in Q3 got him ahead of Raikkonen on the grid despite running wide at the exit of Parabolica. He backed out of lunging at Rosberg at the start, and from there on his race was straightforward aside from a sluggish first pit stop. Racing Hamilton for second place wasn’t an option as the Ferraris had to pit twice.

Kimi Raikkonen – After a “messy” (his word) second practice session he qualified alongside Vettel on row two, less than a tenth of a second between them. There was little to choose between them in the race either.

Felipe Massa – Qualifying gave cause to view Massa’s decision to retire as a timely one: he was half a second off Bottas and missed the cut for Q3. He made amends with a decent start which got him up to eighth, but he was jumped by Verstappen at the first round of pit stops. He was a much closer match for Bottas on race pace, though.

Valtteri Bottas – Produced some brilliant laps in qualifying and his final one, where he found the six-hundredths of a second he needed to stop Ricciardo taking fifth place, was a gem. He also reaped the reward of taking the cooling vents off his helmet, which he reckoned was worth a thousandth. He was never going to keep Hamilton behind but he might have seen Ricciardo coming to deprive him of fifth, but he deserves credit for having the awareness not to turn in on his rival.

Daniel Ricciardo – Both Red Bull drivers tried to get through Q2 on the soft tyres but couldn’t make it. Ricciardo was one-thousandth of a second off beating Bottas to fifth. Choosing to run super-softs for his final stint gave him a chance to pass the Williams, but he had a narrow window of opportunity during which the Red Bull’s braking advantage was bigger enough to make it possible, and he came from an enormous distance back to complete a remarkable move.

Max Verstappen – Not as happy with his car as Ricciardo in qualifying and further hampered by radio problems, but backed his team mate up on the grid. He could count himself fortunate to avoid a reprimand for impeding Rosberg in final practice. Verstappen didn’t get off the line well, his car going into anti-stall, but despite Red Bull’s top speed disadvantage he passed a Mercedes-powered Force India in his first stint, and Alonso’s McLaren too. He took the second Force India at the end of the race for seventh – a decent recovery.

Nico Hulkenberg – Admitted he found it hard to nail a balance on his car, though sitting out first practice while Alfonso Celis drove his car won’t have helped. Even so he was only two-hundredths off Perez in qualifying. He lost ground at the start having to dodge around Verstappen, who then passed him for tenth on lap five. He was handed a place by Alonso’s slow pit stop and collected the final point.

Sergio Perez – The VJM09s couldn’t match the low-drag FW38s at Monza: Perez was four-tenths off Bottas in qualifying. Although he benefited from Verstappen’s slow start he was demoted by the Red Bull driver at the end of a lonely race.

Kevin Magnussen – Back in the cockpit five days after his heavy crash at Spa, Magnussen said he was suffering no ill effects. He tried everything to get into Q2: getting a tow from Hamilton, and over-driving to the point of going off, and ended up two-tenths off Palmer as a result. An aggressive strategy left him with a 22-lap stint on super-softs at the end of the race, and the ease with which Ericsson left him behind indicates a better finish was unlikely.

Jolyon Palmer – A chance to bring his car home in front of his team mate was lost when Nasr took him out.

Daniil Kvyat – Blamed Grosjean for failing to get into Q1 after catching the Haas driver at the end of his final flying lap, which Kvyat reckoned cost him two-tenths of a second. His race never really got going: He was passed by Alonso and Gutierrez and later retired due to his battery overheating.

Carlos Sainz Jnr – It was clear from practice the year-old Ferrari engine was hurting Toro Rosso at Monza. Sainz got into Q2 where he was slowest, but was promoted to 15th by Grosjean’s penalty. An attempt to do a one-stop race with a 29-lap stint on super-softs was extremely ambitious and predictably didn’t work.

Marcus Ericsson – Was disappointed with his qualifying run after picking up oversteer after final practice. He ran a one-stop strategy in the race but didn’t have much pace on mediums at the end and couldn’t keep Sainz behind.

Felipe Nasr – A loss of power at Lesmo compromised Nasr’s final run in Q1. He missed the cut for Q2 but still lined up ahead of his team mate. After a decent start his lap two collision with Palmer was entirely unnecessary – even the GP2 drivers had shown it was possible to go side-by-side through the Rettiflio, so what excuse did Nasr have?

Fernando Alonso – A single run on new tyres in Q2 was not enough to gain a place in the top ten on this power track. A typically great start put him in the hunt for the points, but a hesitant getaway from his pit stop when the traffic lights failed to change crucially dropped him behind Hulkenberg. After that he took the curious decision to put on a fresh of soft tyres at the end of the race and set fastest lap.

Jenson Button – Wasn’t entirely happy with his run in Q2, admitting “Fernando pulled out a little bit on me”. He was elbowed wide on lap and dropped to the back of the field from where he did well to recover to 12th at one of McLaren’s weaker tracks with better pace than Alonso after the first stint.

Pascal Wehrlein – Reached Q3 for the third time this year and split the McLarens on the grid, though Q3 proved too far for Manor to reach. He almost got by Verstappen at the start, but lost a place to Grosjean on lap two. He changed to mediums on lap 16 which would have been a big ask for a one-stop strategy, but his car failed at half-distance rendering the question moot.

Esteban Ocon – Utterly luckless as his car stopped in practice and again in Q1, leaving him at the back of the grid. He did ran a long stint on mediums at the start of the race but slipped to the tail of the field and was lapped twice.

Romain Grosjean – At one of the team’s strongest venues for several races, a gearbox change penalty pushed Grosjean down to 17th on the grid. However a fine start and a pass on Wehrlein put him in contention for the points. Haas needed one of the five fastest cars to drop out, however, and it didn’t happen, though he resisted Button to the end.

Esteban Gutierrez – A fine effort in qualifying saw Gutierrez give Haas their debut appearance in Q3. He made a terrible start, however, falling to the rear of the field. As he had to start on used tyres this hampered his efforts to recover lost ground, though he made it as far as 13th.

Cast your vote below and explain why you chose the driver you picked in the comments: