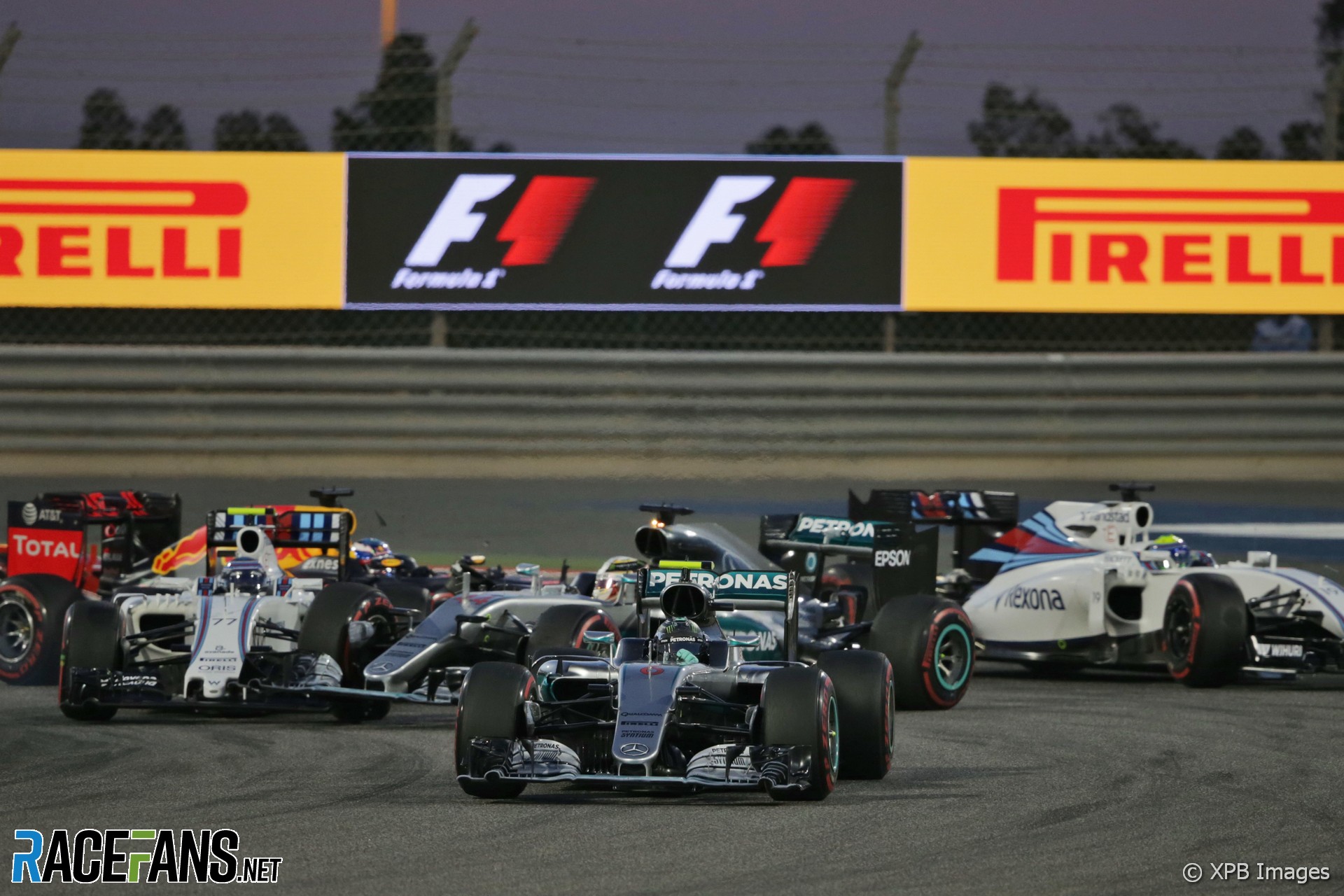 Nico Rosberg extended his run of success to five victories in a row as the Bahrain Grand Prix produced another race of surprises.

As in Australia, Formula One produced a frantic race mere hours after the sport’s reputation took another hammering. The flawed elimination qualifying format, which Bernie Ecclestone and Jean Todt are blocking efforts to remove, continues to invite ridicule.

Does Formula One need to resort to gimmicks to mix up the grid? In Bahrain as in Australia the Mercedes led the Ferraris off at the start of the formation lap, but what happened next did not run to the usual script.

“We’ve been working a lot on the starts,” Nico Rosberg said afterwards. That much was clear from his getaway: from his off-line starting position swiftly past his pole sitting team mate into the lead.

“It was a really good getaway on the dirty side of the grid and that really made my race.” What also made his race was the problem Hamilton encountered seconds later.

The number 44 Mercedes seemed to be lining Rosberg up for a run through turns two and three. But further back Valtteri Bottas has made a rocket-propelled start from sixth on the grid and was bearing down on the pair of them as they reached the braking zone.

As Hamilton swung wide, Bottas spied an opportunity at the inside. But as he committed, Hamilton swung in tightly. A puff of brake smoke from the Williams signalled the pair were on a collision course.

The pair interlocked briefly, the FW38’s front wing and Hamilton’s right-hand floor crunched into carbon fibre splinters. Felipe Massa slipped by into second ahead of Bottas while Hamilton fell to ninth.

“Whoever was on the inside was in my blind spot so I didn’t see them,” said Hamilton afterwards. “It was a racing incident,” he added charitably, “those kind of things happen.” The stewards did not agree – Bottas was given a drive-through penalty and points on his licence.

As lap one ended Rosberg was leading by 1.6 seconds and must have already been mentally clearing a spot on his mantelpiece for the silverware. For not only had Hamilton’s start been compromised but the threat from Ferrari to Mercedes had been snuffed out, too.

Sebastian Vettel had failed to take up his third place on the starting grid after his engine let go on the formation lap. And far from replicating their demon start from Melbourne, Kimi Raikkonen crept away as if he had left the handbrake on.

“I don’t know exactly what happened, if I had some issue or did some mistake,” he said. “I just got wheelspin in the end.” The first-corner mess meant he wasn’t punished as severely as he might have been.

The next car ahead of him was Daniel Ricciardo’s Red Bull. He was struggling with a broken front wing incurred in the Bottas/Hamilton tangle. “I tried to capitalise on it but got caught up in it,” he admitted.

Williams slip out of contention

Hamilton regained two of his lost places on the first lap. He passed Nico Hulkenberg on the run to turn ten and gained another place when Esteban Gutierrez out-braked himself at the last corner.

His car was trailing a shower of sparks from the damaged right side but these subsided as the last of the broken parts fell off. “I lost a lot of performance with the car<" said Hamilton, though exactly how much is hard to gauge. It was certainly quite a bit more than the two-tenths gap between his and Rosberg’s best lap times at the end of the race, as Rosberg never needed to exert himself over the 57-lap race.

But the W07 still had enough in hand to breeze past Romain Grosjean for sixth place on the fourth lap. Further ahead Raikkonen was bearing down on Ricciardo. The DRS zone brought him within striking range and he completed the pass on the run to turn four, soon after which Ricciardo made for the pits.

Bottas was easily passed by Raikkonen and Hamilton in the DRS zone on consecutive laps. Williams were struggling to get much pace out of their used super-softs and they too headed for the pits early.

But while Red Bull had made the more conventional switch to soft tyres, Williams opted for mediums for both their drivers. With Bottas having to return to the pits to serve his penalty and Massa unhappy with his balance with a new wing he had been given little time to optimise, the FW38s soon dropped out of contention.

Raikkonen has to settle for second

Raikkonen came in on lap 12 to switch to softs and made immediate use of his fresh tyres when he returned to the track, re-passing Massa and Ricciardo. That left only Rosberg ahead but the Mercedes was already over 11 seconds up the road and un-catchable barring a Safety Car intervention.

“Once I was second place I was already one full straight behind Nico,” Raikkonen reflected. “So obviously not an awful lot to do after that. But we managed to catch up little-by-little and I think we did the maximum that we could after that start.”

With Rosberg managing his pace and having two sluggish pit stops, there wasn’t a great deal of consolation for Ferrari to take from this race.

Hamilton’s wounded Mercedes easily rose past Massa and Ricciardo to claim the final podium place, but the gap between him and Raikkonen was too great to bridge. But while the contest for the podium positions was resolved in straightforward fashion, the fight over the remaining places was intense.

Red Bull played to their strengths with Ricciardo, bringing him in early for his stops to maximise the power of the ‘undercut’. This left him needing to use the medium tyres for his final stint which might have left him vulnerable in the event of a Safety Car, but such interruptions are rare at tracks with such generous run-off.

Grosjean had celebrated when Hulkenberg bumped him from eighth to ninth in qualifying as that meant he could start on a fresh set of tyres. Haas had saved two new sets of super-softs for the start of his race and it paid off: the Ferrari power got him past Massa twice and into a legitimate fifth place.

At the end of the race he came under pressure from a flying Max Verstappen. The Toro Rosso driver won a robust scrap with his team mate on the first lap and ran a lengthy third stint on medium tyres so he could end the race on super-softs. In the final stint Verstappen went past Massa as if he wasn’t there, obliging Grosjean to up his pace for the final two tours to ensure he wasn’t caught.

This done, Grosjean and Haas celebrated an even better result than their debut in Australia and one achieved without the fortuitous circumstances of Melbourne. “This is the American dream,” declared the jubilant driver on the radio.

There was another bitter pill for Massa on his final tour. Rosberg put him a lap down only for the Williams driver to close on him again in the DRS zone. Rather than pass the Mercedes Massa dawdled on the outside of turn one, handing an opportunity to Daniil Kvyat.

The Red Bull driver had surged forward in the race on completely the opposite strategy to his team mate. Following a long first stint on soft tyres he ended the race on attack mode making use of his spare super-softs. He’d already taken Bottas earlier in the stint, now he completed a set of Williams drivers to salvage a creditable seventh. Eighth and ninth for the FW38s was “not even close to where we should be” in Rob Smedley’s assessment.

But tenth place for newcomer Stoffel Vandoorne was not only a remarkable achievement for the rookie on his debut, it was also McLaren’s first points of the season. Racing director Eric Boullier called his performance “flawlessly mature”, and the result was a welcome consolation after a power unit glitch ended Button’s race.

No points for Force India

The same could not be said of several of Vandoorne’s competitors who squandered potential results. Both Force India drivers picked up damage in the opening laps at turn one – Hulkenberg in the lap one mess, Sergio Perez the next time by when he tangled with Carlos Sainz Jnr.

That left the Toro Rosso driver with a puncture and damage from which he later retired. Given the penalty Bottas received, Perez should count himself very fortunate to escape a sanction.

For the second race in a row Renault were just one place away from the points. Kevin Magnussen, who had started from the pit lane after passing a red light during practice, made up 11 places with a solid drive at a track which did not suit his car. Team mate Jolyon Palmer pulled into the pits at the end of the formation lap with a suspected hydraulic problem.

The two Saubers fought hard in the opening laps but Felipe Nasr always seemed destined to lose the place to Ericsson as he was clearly unhappy with his car’s handling. The pair were separated at the flag by Pascal Wehrlein’s Manor.

In Australia Rosberg had never looked like a match for Hamilton on pace. In Bahrain it was clearly much closer between the pair, and another poor start by Hamilton swung the initiative to his team mate again.

It gives Rosberg a useful early initiative in the championship and puts Hamilton slightly on the back foot, knowing he must get to the bottom of these tardy getaways which have cost him dearly – and disproportionately – in the opening races.

For Ferrari, the need to solve their obvious reliability problems is more urgent. And for Formula One, the need to stop wounding itself with needless squabbling over rules which never needed changing to begin with is of paramount importance.