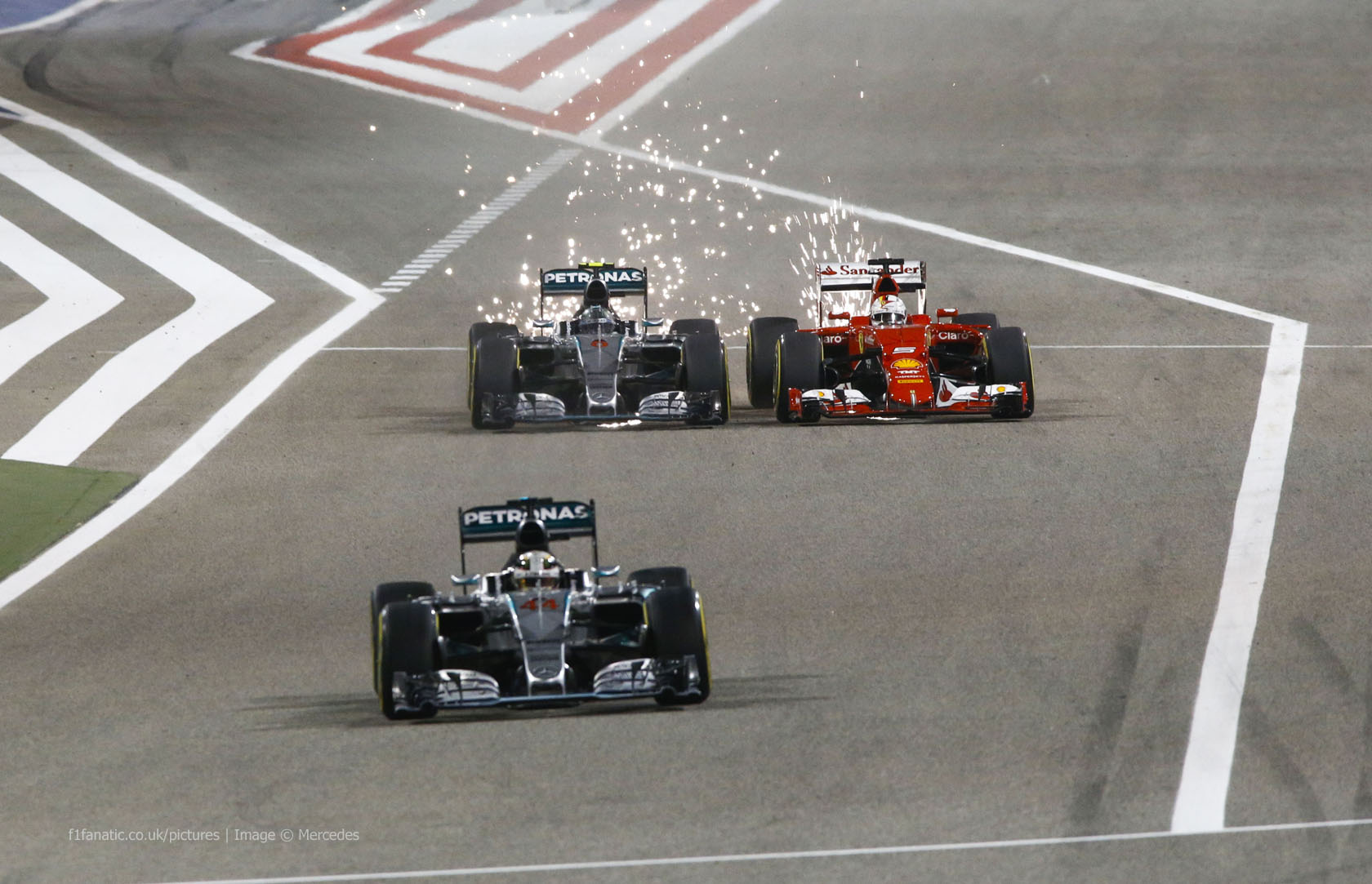 Lewis Hamilton took another step towards retaining his world championship crown with victory in the Bahrain Grand Prix.

But the threat to his Mercedes team from Ferrari was every bit as real in Bahrain as it had been when they were shocked by Sebastian Vettel in Malaysia.

A brake-by-wire fault cost Nico Rosberg second place to Kimi Raikkonen – and a similar problem on Hamilton’s car might have given Raikkonen the win had it struck sooner.

As the cars lined up under floodlights for the second time in Bahrain the immediate threat to Hamilton appeared to come from Vettel’s Ferrari, which he shared the front row with.

And straight after the red lights went out the red cars went on the attack. Vettel defended his position firmly from Rosberg, opening a route for Raikkonen to pass the Mercedes around the outside of the first corner in a move which had the distinct appearance of bring pre-planned.

But if Rosberg had seemed ineffective on his previous race in China, in Bahrain he was on maximum attack. On lap four, the second past pits the pits with DRS open, he pulled out from behind Raikkonen and easily out-braked the Ferrari to take third place.

Even in these early stages, however, there were tell tale signs of the problems Mercedes would face later in the race. “Just need a little bit of brake management before you attacked Vettel,” Rosberg was told, while Hamilton’s brakes caught him out at turn one and he ran wide, bringing Vettel within range.

While Hamilton eked his gap over Vettel back to over two seconds, Rosberg now had the other Ferrari in his sights. On lap eight Vettel ran deep at turn one, bringing Rosberg within range, and the next time by Rosberg completed another pass in the DRS zone, hanging Vettel out wide as they rounded the first corner.

Vettel’s time loss also brought Raikkonen within range. Separated by less than a second, their lap lapped in similar times but Raikkonen believed he was being compromised. “I think I can go a bit faster,” he said on the radio. “I will try to overtake him”.

He didn’t have to – Vettel was in the pits as early as lap 13 as Ferrari tried to use their superior tyre life to put pressure on Mercedes. And it worked: Rosberg came in on the next lap and dropped back behind Vettel. But only temporarily. As lap 16 began Hamilton was making his way out of the pits having lost around a second with a sub-par stop. While he rejoined the track, in his mirrors he could see Rosberg passing Vettel with a jab of DRS and an explosion of sparks.

Raikkonen took a different route to his team mate. He made his first stop on lap 17 – four laps later than Vettel – and opted to get his mandatory stint on the medium tyre compound out of the way. His solid mid-race pace on the harder tyre – during which time he lost just half a second to Hamilton who was on soft rubber – brought him into contention in the closing stages.

Vettel, however, removed himself from the equation. His second pit stop on lap 32 got him back ahead of Rosberg once again, as this time the Mercedes driver had to wait for Hamilton to be serviced before coming in. But Rosberg took Vettel for the third time when the Ferrari driver went off at the final corner on lap 36.

This cost Vettel more than a single position as the Ferrari had picked up damage on its front wing. Rather than leave him out and risk a complete failure and the loss of all points, Ferrari elected to pit him for a replacement. It only cost him one position, to Valtteri Bottas, but he was unable to recover it by the end of the race.

Had Vettel been able to stay on Rosberg’s tale it might have been he who capitalised when the Mercedes drivers’ overheating brake system put him wide at turn one on the penultimate lap. But that’s not a given, as by then Raikkonen had erased the Mercedes drivers’ advantage and was hot in pursuit of second place when it fell into his lap. There was little action immediately behind Vettel’s delayed Ferrari. Daniel Ricciardo and Romain Grosjean were each around 20 seconds behind the next driver.

Next was Sergio Perez, the Force India driver having surprised his team by making a two-stop strategy work – the standard tactic for their rivals had been Force India’s ‘plan B’ going into the race, and Perez had made it work without the help of a Safety Car period by keeping his tyres alive in the opening stint.

Team mate Nico Hulkenberg, who unlike Perez was required by the rules to start the race on old tyres, made his first pit stop seven earlier than his team mate. That turned out to be his first of three, and by the end of the race he had lost five places from his starting position.

Daniil Kvyat followed Perez home, the pair having passed Felipe Massa as the tyres on his Williams faded late in the race. Massa had started from the pit lane after a sensor problem prevented his Mercedes power unit from firing up on the grid. He salvaged tenth.

Fernando Alonso came in 11th on a difficult weekend for McLaren in front of their Bahraini investors. Alonso may have led half-a-dozen cars at the finish, but Jenson Button’s car could not be willed into starting for qualifying or the race.

Among those Alonso led home were the two Saubers – Felipe Nasr delayed by an engine problem, Marcus Ericsson suffering a slow pit stop – the pair separated by Hulkenberg’s Force India. The memory of Mercedes’ strong start to the season in Australia has faded over the course of F1’s first four ‘flyaway’ races. A reinvigorated Ferrari returns to Europe with the scent of blood in their nostrils.

The last two races have raised the intriguing prospect of Vettel continuing to take the fight to Mercedes in qualifying and with an aggressive strategy in the race, while Raikkonen reaps the benefit of conserving his pace until the closing stages. And perhaps if Ferrari had got him out from behind Vettel sooner, he might have been in an even stronger position on Sunday – not unlike what happened to him at this track with Lotus in 2012.

But Raikkonen naturally harbours ambitions of being the vanguard of the Ferrari offensive. After the race he identified the need for him to “qualify more higher up, make better starts and go from there” in order to challenge consistently for victories.

“I think we had a pretty decent speed today but obviously if you’re behind any cars and you lose any seconds, you will pay a price for it in the end,” he continued. “I think we just have to keep working and improving the whole package and how we do things.”

“I’m sure we will get there and we can fight for wins every weekend after that.”