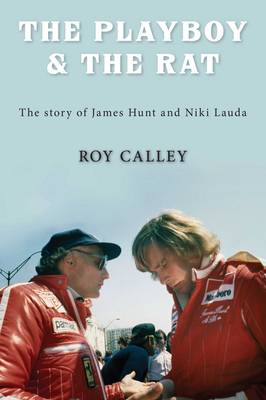 The appearance of this new book on 1976 world championship rivals Niki Lauda and James Hunt is obviously timed to coincide with the release of Ron Howard’s film on the same subject next month.

Although I have seen Rush, due to an embargo I’m not allowed to tell you anything about it just yet. But I can tell you whether you should pick up The Playboy and The Rat in the meantime.

Author Roy Calley, a BBC journalist, has previously written several books on Blackpool Football Club and one on James Hunt’s 1976 season. He’s not the only person jumping on the Rush bandwagon: Tom Rubython, another Hunt biographer, has a book on the 1976 title rivals coming out soon called Rush to Glory. You see what he’s done there.

The Playboy and The Rat covers the careers of both drivers in 200 pages. The inevitable problem of trying to tell the careers of two drivers, both larger-than-life personalities with successful careers, is the difficulty of fitting everything in. But in trying to cover so much ground in so little space it doesn’t do justice to the story it’s trying to tell.

The style is more storybook than biography: loose and conversational rather than direct and concise. Although reasonably detailed it too often glosses over important episodes, giving the same light treatment to even the most significant passages. It’s conspicuously short on quotes, and those which do appear aren’t cited. There’s no list of reference material and no indication any original interviews have been conducted.

The Hunt chapters in particular seem to draw very heavily on Gerald Donaldson’s excellent 2003 biography, which is the place to start if the anticipation of Rush has got you in the mood to read more about this period. Follow that up with either or both of Lauda’s punchy autobiographies For the Record and To Hell and Back.

Although the author clearly knows this subject well the Playboy and The Rat doesn’t get anywhere near as close to it as previous books such as these have done.

Buy The Playboy and the Rat (Paperback)

Buy The Playboy and the Rat (Ebook)

The Playboy and The Rat

25 comments on “The Playboy and The Rat reviewed”