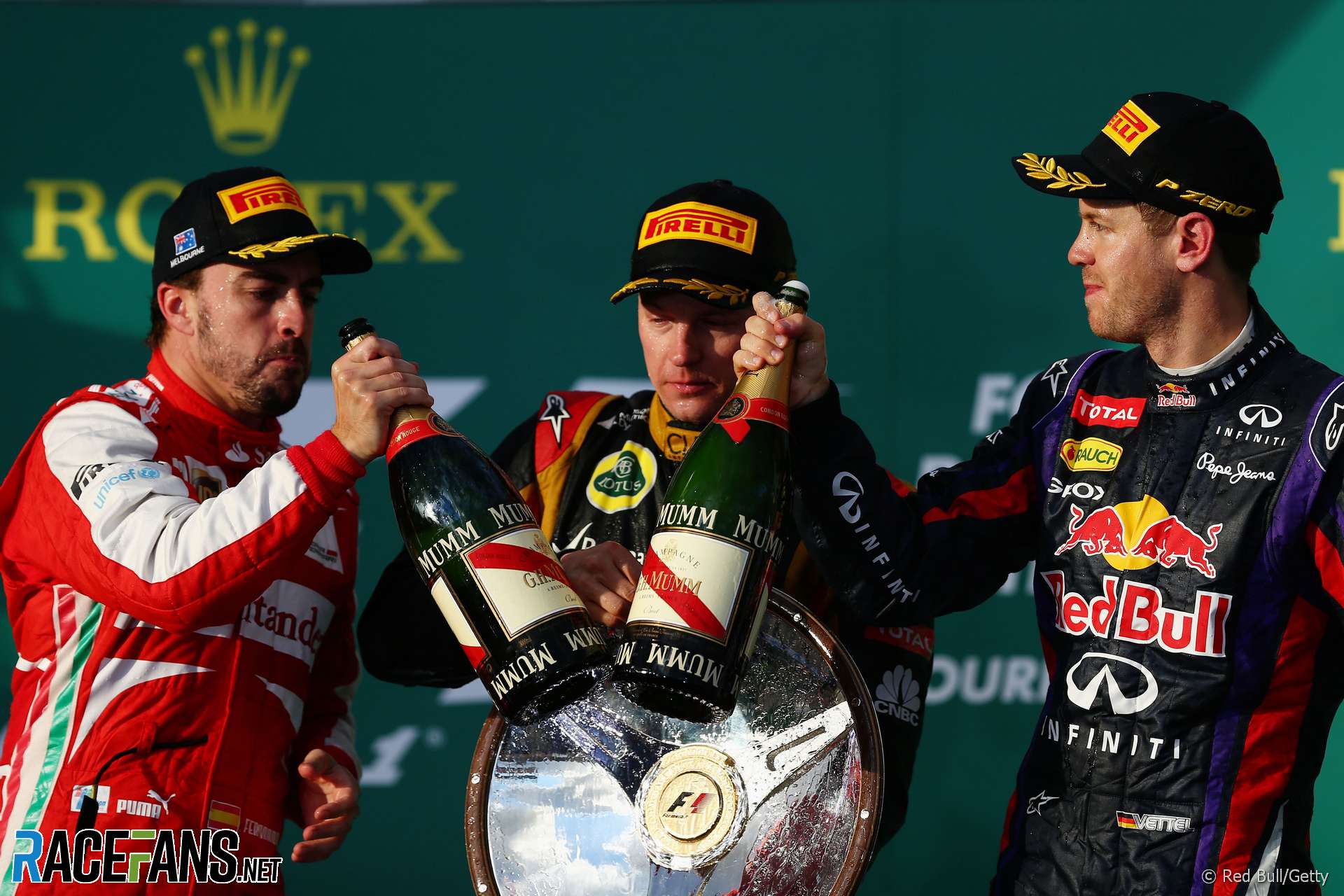 Speaking at this year’s final pre-season test session, Lotus team principal Eric Boullier remarked on how some cars seemed to be better suited for one-lap speed at the expense of pace across a stint, and vice-versa.

Asked if that would place greater emphasis on race strategy he readily agreed, saying it would be very important. That proved prophetic of what unfolded in the first race of 2013, won by his driver Kimi Raikkonen.

The Lotuses claimed the fourth row during the postponed qualifying session which took place on the morning of the race. But the E21’s pace over a race stint proved its strongest suit, and by being one of few drivers to make a two-stop strategy work, Raikkonen claimed an excellent victory.

The Red Bulls seemed to display the opposing traits. Quick in qualifying, but that pace vanished in the race.

Sebastian Vettel had been able to set fastest times seemingly at will on Friday, when the weather was sunny and the track dry. And the disruption and cool conditions of qualifying failed to keep him from pole position.

As the lights went out and Vettel established an immediate two-second lead over his pursuers, it was all looking very 2011. But it didn’t last. Within a couple of laps he had a pair of Ferraris parked on his tail.

The first of these belonged to Felipe Massa, who had looked at least a match for Fernando Alonso all weekend and pipped him in qualifying by a mere three-thousandths of a second.

From fourth and fifth on the grid they each picked off Mark Webber and Lewis Hamilton on lap one, then Massa rebuffed an attack from Alonso at turn 13.

By lap four Vettel, Massa and Alonso were covered by 1.6 seconds. Raikkonen had also appeared behind them in fourth place having gone around the outside of Hamilton at turn 13 on the second lap.

As early as lap seven Vettel was in to discard his super-soft tyres. Massa came in the next time by, then Raikkonen followed Alonso in on lap nine, the quartet keeping the same order.

The Mercedes drivers held on longer. Hamilton, who fallen from third to fifth by lap two, led until he came in on the 12th tour. Rosberg got rid of his super-softs on the next lap.

Now Adrian Sutil was the only driver keeping Vettel from taking his lead back. The returning Force India driver had lined up 12th on the grid and, with Nico Hulkenberg not starting due to a fuel system problem, had been in the advantageous position of being the highest driver on the grid with a free choice of tyres.

He elected to start on the medium compound. His tyres held on to lap 20, while Vettel and the train behind him and applied pressure. Sensing an opportunity, Andrea Stella brought Alonso into the pits for his second stop at the end of lap 19.

Pulling him out of the train turned out to be an inspired move – it got Alonso ahead of Vettel and Sutil. And, of course, Massa, who might have wondered why Rob Smedley didn’t pull the same trick for him.

That should have put Alonso on course for victory. But Raikkonen had not joined in the second rush of pit stops triggered by the Ferrari driver. Instead the Lotus covered a 25-lap middle stint on the mediums. As he departed the pit lane for the second time with 24 laps to go, Raikkonen was quite confident he would not be back for a third stop.

Hamilton attempted to do the same as Raikkonen but despite having started his second stint four laps later than the Lotus he ended it three laps sooner.

Alonso appeared on Hamilton’s tail on lap 31. Hamilton clearly had an eye on the big picture, asking his team about the Ferrari drivers’ strategy as he bore down on him. But when the pair went side-by-side into turn 13 Hamilton locked his tyres badly.

That forced him to pit early and wrecked his chances of making it to the end without a third stop. It was a double blow for Mercedes – Nico Rosberg had already retired with an electrical problem while running third.

Raikkonen was swiftly back up to second as his rivals pitted and he picked off Sutil with ease. But Alonso hadn’t given up yet – after his third and final pit stop he began cutting into Raikkonen’s lead, bringing it down from 6.5 seconds to 4.

But thereafter the Ferrari’s progress stopped. Alonso’s progress past Sutil was less smooth than Raikkonen’s and he had a near-miss with Charles Pic’s Caterham at one point.

Although Alonso made small gains after that, Raikkonen put the matter beyond doubt in the final five laps. He produced the fastest lap of the race and stretched his advantage over Alonso to 12 seconds.

Vettel dropped back from Alonso at a similar rate over the final laps, the Red Bull nowhere near as kind to its tyres as the Lotus.

Massa took fourth behind him, and a radio message from Smedley at the end of the race gave an insight into the target Massa had set himself pre-race: “Confirmed as not our best circuit but we came here and exceeded what we came here to do. You wanted a couple of points out of it and a clean weekend, we got 12. Good weekend.”

Sutil’s late final pit stop ruined his race. The super-soft tyres proved no better later on than they had been earlier. He emerged from the garage behind Massa and was passed by Hamilton and Webber in a single lap as severe graining cost him up to eight seconds on one lap.

Paul di Resta probably would have passed Sutil as well but he was ordered to “hold position”. At such an early stage in the season this was a poor reflection on the team’s faith in its drivers ability to race each other without crashing, especially given Sutil’s restraint in battle earlier.

Webber collected sixth having started second. His hopes of finally finishing on the podium in his home race evaporated, as they often have, within seconds of the start. An engine control unit fault kept him from using KERS for the first 20 laps, and a problem with the front jack on his first pit stop cost him almost three seconds. Both Red Bulls also suffered a loss of car-to-pit telemetry.

Jenson Button ended a miserable weekend for McLaren by salvaging ninth place, which he said was the limit of what the car was capable of. He’d done three laps on the super-soft tyres he qualified on and had to change them after just four laps.

The final point went to Romain Grosjean, who believed his car had developed a problem after finishing over 80 seconds behind his team mate.

Sergio Perez ended his first race for McLaren out of the points with Jean-Eric Vergne in close pursuit. The Toro Rosso driver flat-spotted his tyres trying to pass Button earlier in the race. Team mate Daniel Ricciardo retired with an exhaust fault.

The sole Sauber of Esteban Gutierrez came in 12th ahead of fellow rookie Valtteri Bottas. The Williams driver admitted to making mistakes earlier in the race that cost him positions but at least he reached the chequered flag unlike his team mate, who spun off on lap 25.

Jules Bianchi was 54 seconds adrift of Bottas at the flag, but comfortably clear of Pic’s Caterham. Their team mates were next, Giedo van der Garde the last driver home after suffering a puncture.

Raikkonen began the second year of his F1 comeback the way he did when he won the world championship in 2007: with a win.

For Boullier, it vindicated the team’s pre-season preparations. Echoing his words during testing he said: “It was exactly what we planned – the strategy was agreed before the race.”

“The car has been designed successfully to save the tyres,” he added. It’s an approach that has clearly paid off, and one that should stand them in good stead for next week’s race in the heat of Malaysia.