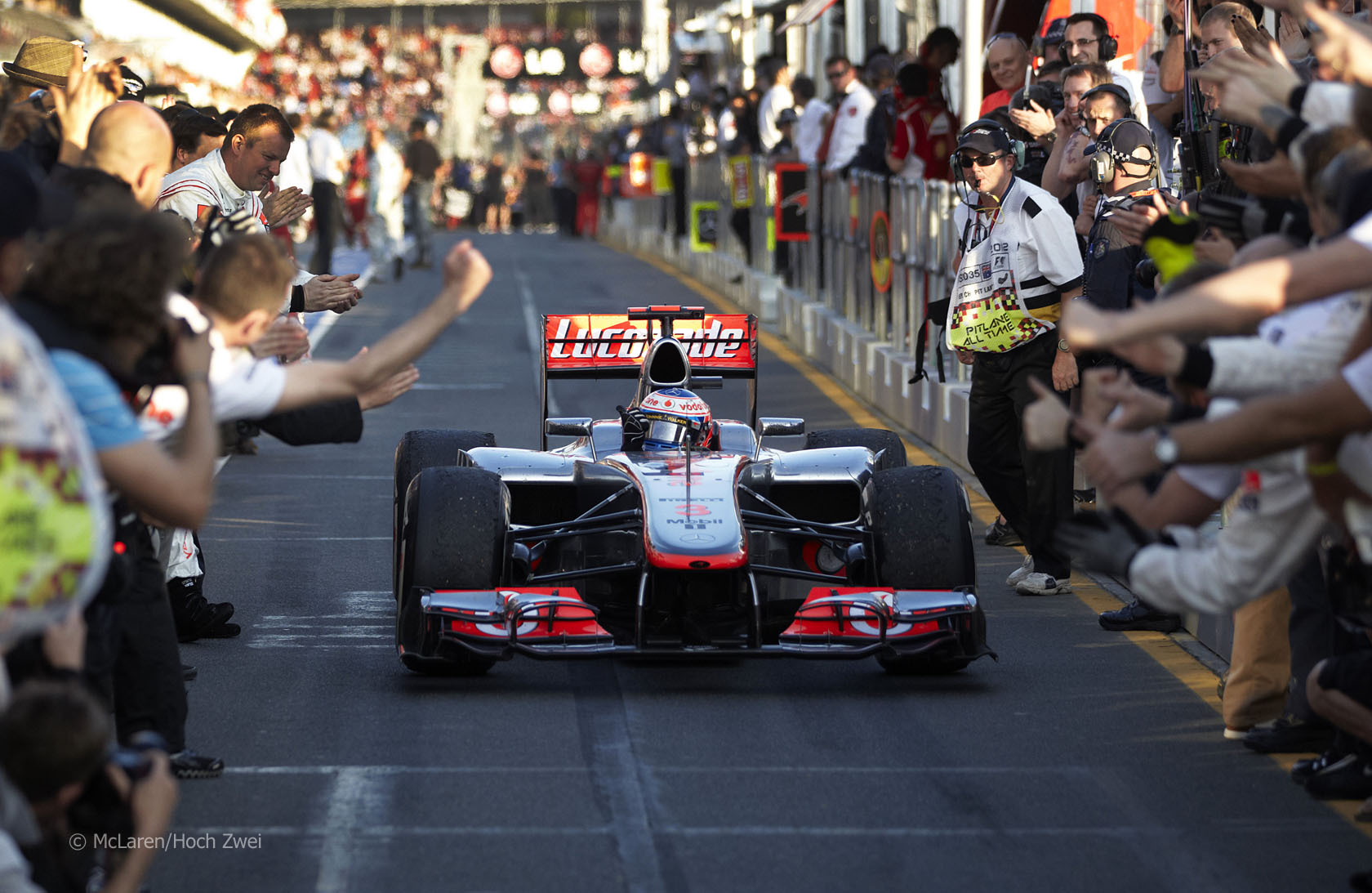 When the MP4-27s lined up on the front row of the grid for the first race of the year in Australia, it seemed McLaren were ready to finally end their 14-year wait for a constructors’ championship trophy.

But as the season unfolded, the one-three finish Jenson Button and Lewis Hamilton went on to score would be their best result of the season.

On pure pace, the MP4-27 was the car to beat this year. The team were quick to exploit the potential of using the Coanda effect to direct exhaust gasses into their diffuser to recapture some of the performance lost as the FIA tried to ban the exhaust blowing seen in 2011.

In at least one other respect McLaren following the lead set by their rivals, replacing their distinctive drooped nose with a higher version, though the MP4-27 never sported the step seen on most of the other cars.

But failures in the car and by the team cost them the chance to bring home more championship silverware. And they likely contributed to Hamilton’s decision to leave.

Hamilton began the year with a trio of third-place finishes that briefly put him at the head of the drivers’ championship table. But errors by the team in the pits in Malaysia and China deprived him of better results, and another pair of mistakes in round four left him only eighth.

An even more costly blunder followed in Spain. With too little fuel in his car, Hamilton was banished to the back of the grid. On a track where overtaking is especially difficult his patient climb through the field was poorly rewarded with another eighth place.

Sam Michael, who had been hired from Williams as sporting director to ensure the team maximised the potential of what they brought to each race, set about improving the team’s performance in the pits. They drilled until they became consistently the quickest team around, but the benefits gained were never going to make up for the points lost earlier on.

Following his first-round victory Button had a poor run of form. Contrary to Hamilton, his problems were more self-inflicted as he seemed flummoxed by the tyres. He finished behind Hamilton in Spain despite starting 14 places ahead of him. Monaco and Canada proved disastrous – in the latter he was lapped while Hamilton claimed his first victory of the year. The resurgence of Red Bull and Ferrari increased the pressure on McLaren. Having judged the tyre situation to perfection in Canada, Hamilton struggled in the closing stages in Valencia and ended up getting taking out by Pastor Maldonado. Button’s trials continued with eighth.

One of the car’s few weaknesses in terms of performance was its handling in wet conditions, where the drivers had difficulty making the tyres perform. Hamilton and Button have usually thrived in the wet, but during rain-hit qualifying sessions in Britain and Germany neither made it into the top five.

However Germany did see the arrival of an extensive upgrade including revised sidepods which put them back at the front of the field. Button claimed second in the race and Hamilton showed good pace after being delayed by a puncture. In Hungary he stuck the car on pole position and rebuffed the Lotuses for the team’s third win of the year.

In the nine races which followed the summer break the team produced another four wins and five pole positions. Yet their rate of scoring fell largely due to a single reason: unreliability.

The MP4-27’s gearbox proved a particular weakness: Hamilton’s failed as he led in Singapore. His championship chances effectively died along with it and a few days later he was announced as a Mercedes driver.

A similar fault led to Button receiving a five-place penalty on the grid in Japan. Hamilton was hit by another gear change problem in India, which was solved by a rapid pit stop to change his steering wheel along with all his other wheels.

Other technical problems dogged Hamilton during the Japanese and Korean rounds, the latter leaving him to fight a rearguard action against the likes of Kimi Raikkonen. He limped home tenth with a clump of Astroturf stuck to his car, causing further handling problems.

It was further proof that for Hamilton it was a year when if something could go wrong, it did. Ramming that point home further he retired while leading again in Abu Dhabi, this time with a fuel pressure problem.

His final victory at the Circuit of the Americas was classic Hamilton – a dogged pursuit of Sebastian Vettel yielded a single chance to claim the lead, which he seized. But the chance for a goodbye win in Brazil disappeared when Nico Hulkenberg spun into him.

That cleared the way for Button to claim his third win of the season, in addition to an emphatic win in Spa where he claimed pole position and drove away from the field as if it was 2009 again.

The MP4-27 was the quickest car of the year which makes it hard to avoid the conclusion that McLaren’s mistakes cost them and their drivers the chance to win championships. That squandered potential will weight heavily on their minds. And they know that losing Hamilton is a considerable blow.

The Spain blunder and the fumbled pit stops early in the season cost them many points but the late-season retirements hit them hardest. In addition to Hamilton’s problems Button retired from second in Italy and failed to reach Q3 in America with another failure.

It leaves McLaren with plenty to work on over the winter to ensure such a clear opportunity for championship success is not missed again.