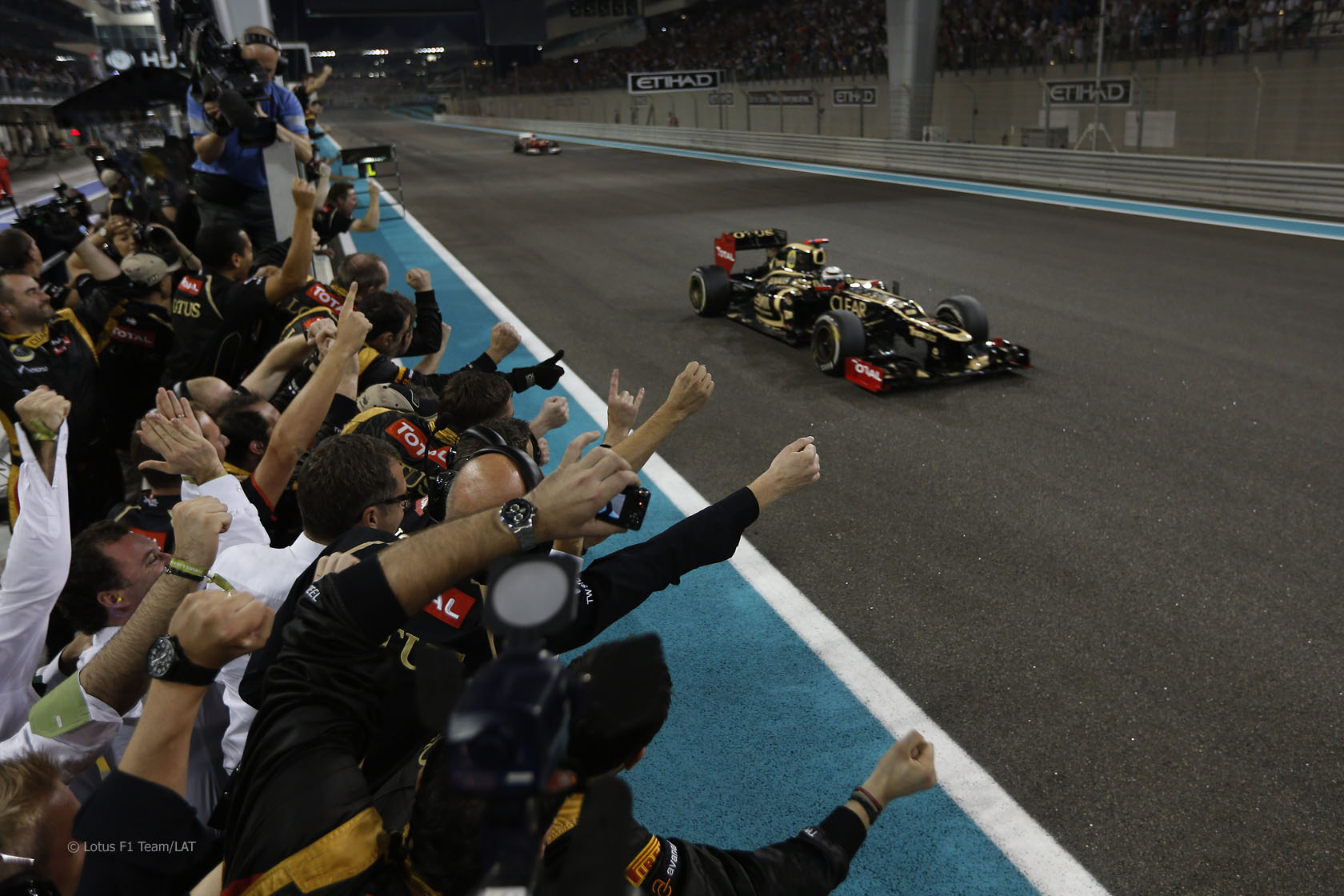 It was all change for this team over the winter with new drivers and a new name. After months of wrangling, the former Renault outfit finally acquired the name Lotus from Tony Fernandes’s outfit, which became Caterham.

There was one twist left in this preposterous saga, as Lotus Cars relinquished their title sponsorship of the team. They retained the Lotus name yet confusingly chose to align their identity with that of their factory predecessors, namely Toleman, Benetton, and 2002-2011 era Renault.

Fortunately those tasked with conceiving a coherent and logical identity for the team are not those whose job it is to make the car go fast. Lotus enjoyed a vastly more successful season in 2012 than they had in 2011 as Renault, more than quadrupling their points haul and moving up a place in the championship.

It wasn’t just the name that changed over the winter – two new drivers arrived as well.

It was all change in the driver line-up too. Having suffered the pre-2011 shock of losing Robert Kubica to a rallying accident, a top-class driver needed to be found the lead their charge.

Nick Heidfeld had been discarded the previous season, and having used Bruno Senna as a stopgap a more promising solution was found in the shape of Kimi Raikkonen.

Vitaly Petrov departed too, and in his place came a driver who had already appeared for the team in its previous incarnation, Renault, three years earlier: Romain Grosjean.

After a difficult 2011 in which the (Renault) R31, with its novel forward-exit exhausts, fell off the pace, much better was needed from the (Lotus) E20. It got off to a promising start as it was the quickest new car at the first test of the year in Grosjean’s hands.

But when the teams arrived at the Circuit de Catalunya their progress was halted by a major failure on their chassis. After missing the entire four-day test and working frantically to produce a solution, they were back on track a little over a week later.

The new car remained quick after the fix. In the first qualifying session of the year they were the second-fastest team, Grosjean lining up third on the grid behind the two McLarens. But Raikkonen was down in 17th after an error in qualifying.

In the race Grosjean retired early following a collision while Raikkonen made up for lost time. It was the shape of things to come – Raikkonen’s qualifying performances were invariably better than that, though by no means always as good as they should have been.

Bahrain proved a breakthrough race as Grosjean passed Lewis Hamilton early on to run second. He soon had to make way for Raikkonen who had qualified outside the top ten but, aided by the extra sets of fresh tyres that permitted him, made rapid progress through the field to challenge Sebastian Vettel for the lead. Both drivers finished on the podium and at the next race in Spain they also gained ground quickly in the closing stages, finishing third and fourth. In Canada Grosjean produced his best performance of the year for second and it seemed the team’s return to winning ways could not be far away.

Raikkonen’s post-race elevation to third in Germany began a sequence of three consecutive podium scores. He led another Lotus two-three in Hungary, bottled up behind Hamilton.

It was a sign of how much the team had progressed since last year that satisfaction at finishing a race on the podium increasingly gave way to concerns over why they hadn’t won one yet.

In the final third of the season it began to look as though Lotus had missed their best chance. The team spent several races trying to incorporate an enhanced version of DRS on their car, without success.

“That really is tricky,” said technical director James Allison after the team halted efforts to get the system on the car during the season. It switched focus to developing a ‘Coanda effect’ exhaust, exploited to useful effect by several teams already, and soon made gains with it.

But the loss of straight-line speed caused by the system was brutally exposed when Raikkonen spent the entire Indian Grand Prix stuck behind Felipe Massa.

This was remedied for the Abu Dhabi Grand Prix and after a superb start Raikkonen was perfectly placed to take advantage of Hamilton’s mid-race retirement. He took the lead, weathered increasing pressure from Alonso in the closing laps, and claimed the first victory for a Lotus in 25 years.

Despite his victory, Raikkonen’s chances of winning the drivers’ championship ended with that race. His points-scoring rate dropped off while Lotus failed to get anywhere with their DRS upgrade. But he continued to score points until the final race.

In the meantime Grosjean’s season went off the rails badly. He should have followed Canada with a second consecutive second place but his alternator let him down in Valencia. Without question the nadir of his season was Spa, when he trigged a multi-car crashed which removed several other drivers from the race and earned a one-race ban.

Grosjean had been involved in several incidents prior to the Spa crash though he was not the persistent troublemaker some painted him as. He did, however, have all the hallmarks of a driver who left too little margin for error, as was clear when he needlessly tangled with Pedro de la Rosa during qualifying in the final race in Brazil.

In his absence, Jerome D’Ambrosio made a single start in Italy, but with minimal running and a KERS problem was never going to make an impression.

The first question facing the team heading into the off-season is what they will do about Grosjean. His scoring rate dropped off alarmingly in the second half of the season as he was dogged by trouble. Having amassed 76 points in the first 11 races he added just 20 more in the remaining nine.

It remains to be seen whether the team is genuinely considering replacing him for next year, or just holding off confirming his seat in the hope it will instil a little restraint in their rapid-but-reckless driver.

Grosjean believes he is well equipped to perform better next year if he is given the chance: “I?óÔéĽÔäóve learned a lot over this season – probably more than I would have expected ?óÔéĽÔÇŁ and I?óÔéĽÔäóve definitely come back as a stronger driver because of that.”

Update: Shortly after this article was published Lotus confirmed Romain Grosjean will remain with them in 2013.

What did you think of Lotus’s 2012 season? Should they retain Grosjean for 2013? Have your say in the comments.

20 comments on “Raikkonen helps Lotus to fourth with comeback win”