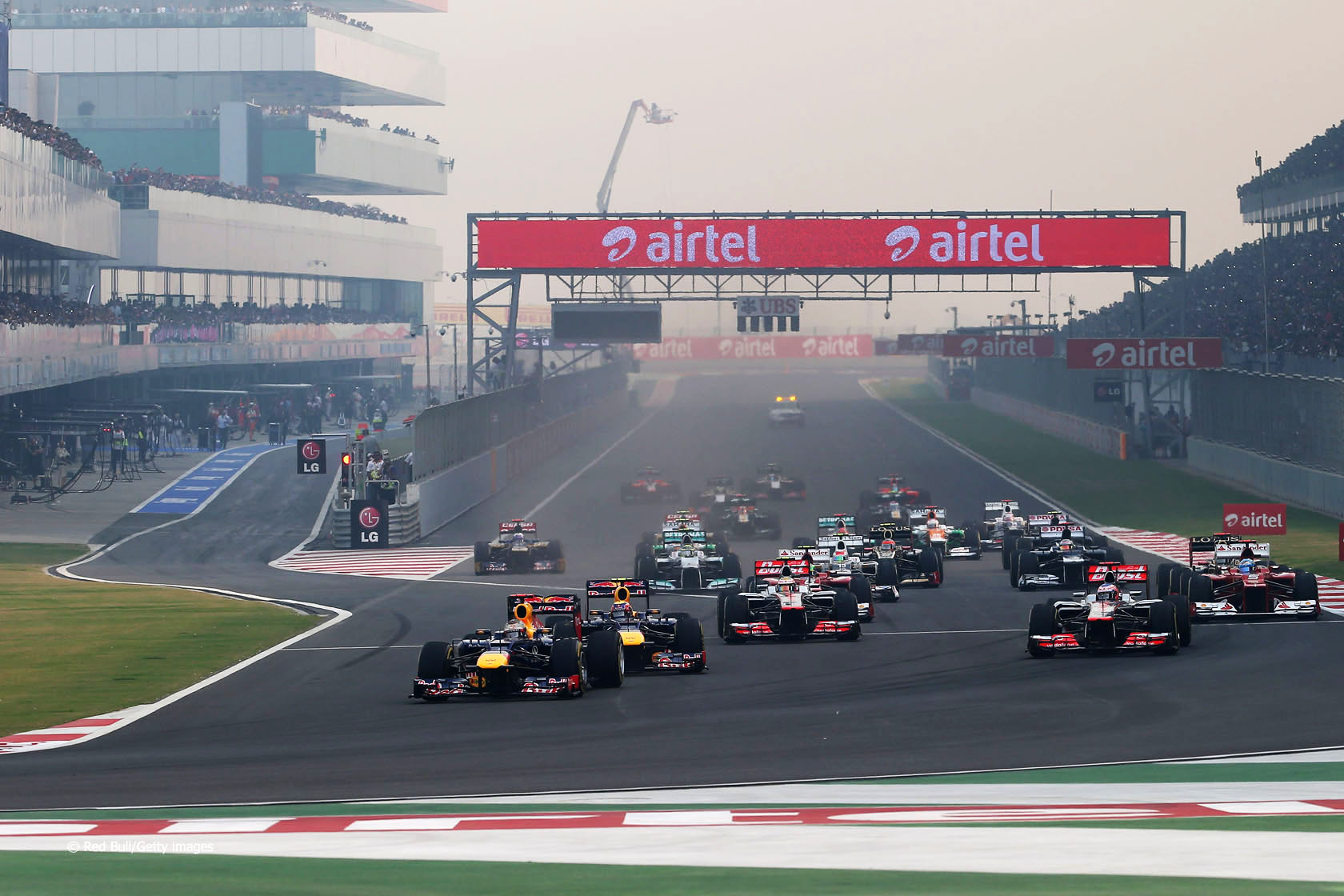 With an average score of 5.194 out of ten the second Indian Grand Prix was rated lower than the first.

The race saw Sebastian Vettel take another lights-to-flag victory. Fernando Alonso started from the third row of the grid and rose to finish second, passing the KERS-less Mark Webber on the way.

The post-race discussion focussed on the growing trend for processional races in the second half of the 2012 season. Here’s what F1 Fanatic readers had to say.

The first lap was amazing: crash-course slipstreaming, and then Alonso, Hamilton and Button side-by-side. That they didn?óÔéĽÔäót hit each other was again a display of experience. After that, it was not that exciting any more.

Two points of criticism: Pirelli’s tyre choice offered no chance for strategic variety, and thus pretty much everybody did exactly the same thing (except Grosjean). Soft/medium might have been better, but that?óÔéĽÔäós just being captain hindsight here.

Secondly the DRS zone: why do we need a DRS zone on such a long straight? One move that I clearly remember was Senna on Rosberg (lap 50 or so). Senna locked up into turn three and was miles away from Rosberg. He deploys DRS and passes him cleanly before the actual corner commences. Again showing that DRS is rubbish, a desperate attempt to increase the number of overtakes.
Andae23

Pirelli motorsport directory Paul Hembery admitted after the race it might have been possible to use the softest tyre instead of the hardest:

I?óÔéĽÔäóm glad they have hindsight but shouldn?óÔéĽÔäót they have thought of that before the race? I?óÔéĽÔäóm sure Hembery and most of his technicians knew in a very high proportion exactly how these compounds will behave here and exactly what strategies (or lack-of) are most likely. They knew it?óÔéĽÔäós a low-friction surface. They had all the data, and yet, they willingly chose to go down the conservative road.
Antonio Nartea

The track configuration and the extending of one of its DRS zones were other main talking points:

There just wasn?óÔéĽÔäót any action and the extending of the DRS zone was just stupid in my opinion. Surely DRS should enable the drivers to get close enough to make a move, a good overtaking move rather than look silly sat there with no chance of defending. It was far too easy.

I saw someone on Twitter saying that the F1 calendar needs a rethink to the calendar as we are left with some boring Tilkedromes at the end of the season. I can see this could be the case but I can?óÔéĽÔäót realistically see how the calendar could be shifted unless the season starts in February or maybe even January. I think the main problem with these latter races is that the cars are pretty set in terms of development and Red Bull clearly have the dominant car, twinned together with tracks that aren?óÔéĽÔäót the greatest makes for fairly boring races.
Smifaye

We?óÔéĽÔäóve been spoiled by races in recent years. What I find interesting is that the circuit flows nicely, it?óÔéĽÔäós fun watching cars go through sectors 2 and 3. There?óÔéĽÔäós enough elevation change to make the circuit visually appealing, much more so than some recent Tilkedromes. And yet both races have been dismal. I really hope that this combination of visual appeal and dull racing doesn?óÔéĽÔäót apply to COTA in three weeks?óÔéĽÔäó time, but I think it probably will.
Scalextric

However there was also praise for the Buddh International Circuit:

I think it is a really good circuit, one of Tilkes best. Unfortunately a good circuit can?óÔéĽÔäót stop a Vettel-Red Bull domination.
Adam Blocker

The debate over the race prompted some conflicting views over the merits of bringing back refuelling:

Whereas this era offers wide competition but difference of performance between teams even drivers is huge because it depends on so many variables so drivers can come up with lot of excuses for not performing. I would suggest to bring back refuelling for the sake of competition in strategies. Ditch DRS, keep KERS but make it more effective and reintroduce a tyre war.
F1Rollout

Refuelling may have been interesting from a strategy point of view. However I always felt it was horrible for the racing.

Watching races like France 2004 where Schumacher went to a four-stop strategy and we ended up with Alonso/Schumacher fighting for the win despite been separated by a big gap after the second stops with the eventual pass been done via a pit stop was just plain boring.

I always felt that race would have been a ton more exciting had there been no refuelling with Alonso/Schumacher right together fighting for the win with Schumacher having to find a way to overtake Alonso on the track if he wanted to win.

I never liked it from the very 1st race at Brazil in 1994 where a great scrap for the lead between Senna & Schumacher was ended at the first fuel stop and Schumacher then proceeded to simply drive away. It would have been far better with no refuelling, we would have seen a great fight between the two on the track again with any eventual overtake having to be done on the track.
StefMeister

Cosmas suggested people who follow races more closely are likely to find more in them to enjoy:

It didn’t have a lot of spectacle but it had some suspense.

If someone watches only the TV coverage I guess it is pretty boring but if you follow also the live timing it is different. For example it was interesting to see how Vettel delayed his pit stop trying to built a gap bigger than 21 seconds to Hamilton so he would not lose the lead and losing also time behind him if he was first in the pits.
Cosmas

But for most the race was simply a snooze-fest:

It?óÔéĽÔäós a shame. We had so many interesting races in the first half of the season. I can?óÔéĽÔäót believe it turned out like this.
Snafu

One of the dullest race of the year.
Marcus Hand

Total trash! I stopped watching it at lap 40, first time this year.
AlonsoMcLaren

The rate the race poll is still open for the Abu Dhabi Grand Prix so cast your vote here: