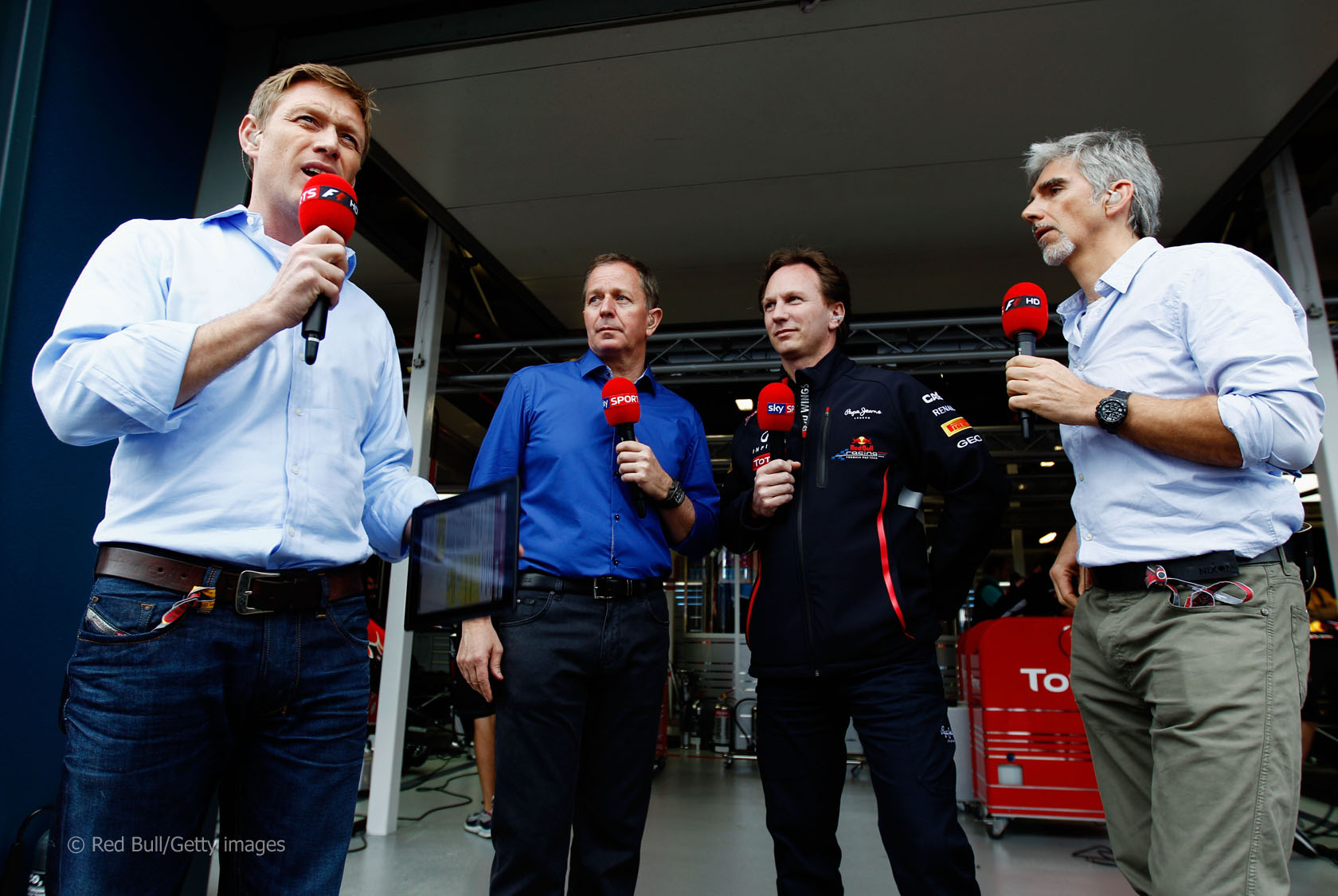 The loss of live coverage of half of the F1 calendar from free-to-air television in the UK prompted furious debate 12 months ago.

A key concern was the potential damage it would do to television audiences in the UK with many people unable or unwilling to pay a minimum of £381 to see the ten races not shown live on free-to-air television.

With one of the first season under the new arrangement behind us, how has the move away from live, free-to-air broadcasts affected F1 audiences in the UK? Here’s a look at the viewing figures for the BBC and Sky’s coverage.

With half of the races no longer live on free-to-air television, the total number of people watching the races has inevitably fallen.

Adding together the average live viewership for the first 11 races of 2011 shows they were watched by 45.7m people, an average of 4.15m per race.

Here’s how many million live viewers each race received (the same unit is used for each graph):

The obvious drawback with these figures is they do not reflect viewers who do not have Sky’s F1 channel and instead watched the delayed highlights of the first six races which were not shown live on the BBC.

Attempting to account for these viewers is where the picture gets complicated, as we have no way of knowing how many repeat viewers there may have been.

Here are the viewing figures for the first highlights programme for each of the six races which were not shown live on the BBC have been included.

These figures will inevitably over-state the extent of F1 viewership this year as some people will have watched both the live broadcast and the repeat of some races – particularly those who wanted to compare Sky and BBC’s coverage.

Inevitably it is impossible to do a like-for-like comparison with these kinds of figures. The best we can do it to make the most of the numbers that are available to us and be wary of their limitations.

Coinciding programmes or exceptional events may have inflated or depressed viewing figures on occasions. The 2011 Canadian Grand Prix viewing figures were very high because a lengthy rain stoppage meant the race ended up being shown in prime-time.

Had that happened this year it would have made little differences as the race was not live on the BBC anyway. This year’s Malaysian Grand Prix did run late due to rain but, again, it was not live on free-to-air television.

This year’s races have faced competition from the likes of the Wimbledon men’s finals (British Grand Prix) and the Olympics (Hungarian Grand Prix). The BBC moved the British and German Grands Prix to BBC2 instead of BBC1, which usually delivers higher viewing figures.

Sky recorded their highest viewing figure for the German Grand Prix on a weekend when their F1 channel was provided at no extra cost to Sky subscribers who did not have the channel in their package, as part of a promotion.

Finally we should note this analysis covers 11 of the first 20 races, of which six were not live on free-to-air television, but five of the remaining nine will be.

Here are all the race viewing figures for the first 11 races of 2011 and 2012, separated by broadcaster. For the BBC in 2012 the figures for their first highlights programme has been used where they did not show the race live:

Average viewing figures for each programme have been used throughout. These were obtained from the BARB and the BBC.

Sky said they prefer to use peak rather than average figures, as their F1 programmes tend to be slightly longer and therefore the average viewerships are lower. When asked, the BBC provided peak viewing figures for their 2011 and 2012 race broadcasts but Sky declined to.

Here is how the BBC’s average and peak figures compared for the first 11 races of this year. Their peak figures are around 25% higher on average:

What the broadcasters say A Sky spokesperson highlighted the extended time they have been able to give to F1 programming through having their own channel: “We’ve given longer lead ups, analysis and stayed on air for longer post-race – meaning we’ve brought viewers coverage of incidents like the Williams fire at the Spanish Grand Prix.”

Sky stated that the rise in the use of mobile devices and time-shifting digital video recorders means that television audience figures have become less useful as a means of measuring popularity.

“Given the extra hours and programming we dedicate to each race and the days and weeks in between, we don’t measure our success by viewing figures,” they added.

“We’re also giving more coverage than even before to the feeder series and the F1 stars of the future, with live GP2 and GP3 and live qualifying too where possible. We’re giving these drivers and teams the opportunity to offer extra value and ways to be seen to their sponsors and we’ve invited personalities from these series to appear on The F1 Show.”

A BBC spokesperson told F1 Fanatic: “There is no evidence to suggest that F1 fans are no longer watching. There are excellent peaks of up to 5m for live and around 4m for highlights.

“It is probably more of a case that in such a huge year of sport with Euro 2012, the Olympics and Paralympics on top of the usual sport offering that there is so much choice out there for sports fans – a large audience contingent engage with whatever is the main sport event on at the time.

“It is important to acknowledge that F1 fans can still access the entire season free-to-air on the BBC, through a mix of live and extended highlights which bring all the action from the race.”

The BBC said they were “very pleased with the figures” adding “overall F1 is doing well”. Even by the most optimistic assessment, F1 viewing figures in the UK have clearly fallen over the first 11 races of 2012 compared to last year. At three of the first five races which were shown live on both channels, combined audiences figures failed to match those of 2011.

The Monaco Grand Prix is considered one of the prized races for F1 broadcasters. When the BBC/Sky race share deal was first announced it was one of the three races BBC immediately confirmed it would screen live in 2012.

The race did not clash with any other major sporting events on free-to-air television. Yet between them, Sky and the BBC attracted less than three-quarters of the 2011 audience.

Even when the BBC’s delayed highlights are factored in – which creates the potential for double-counting viewers – the totals still fall short of last year.

Analysing this kind of data is never straightforward and there are mitigating factors to take into account, many of them noted above. But we should be sceptical of the view expressed by the likes of Martin Whitmarsh recently that the rise of new media means falling television viewing figures are not a concern.

F1 audiences in the UK were on a clear upward trajectory until this year, and it seems wishful thinking to blame new media for the sudden reversal of that trend. If anything, the growth of real-time media such as Twitter and the wealth of information available to fans during races makes following races live even more appealing than before.

“We will never move all countries to pay-per-view only though it wouldn’t make any difference here in the UK,” said Ecclestone. “Sky reaches over 10m [households]. We don’t get 10m on the BBC, normally about 6m or 7m.” Clearly the figures at present do not come close to that. It remains to be seen how they will change over the rest of the season.

In the second half of last year the championship was a foregone conclusion and Red Bull were seldom threatened in the races – a potential turn-off for casual viewers.

This year’s championship and races are far closer. It will be a very poor sign if the UK’s viewing figures for the second half of the season are not better than last year’s.

Meanwhile Formula One Management has already used the UK set-up as a model for similar deals elsewhere, including Italy, where only nine F1 races will be broadcast live on free-to-air television next year.

What’s your view on how the F1 television audience in the UK has been affected by the BBC/Sky deal? Has the new arrangement changed how you watch F1?

Have your say in the comments.

*The Bahrain Grand Prix appeared in place of the Turkish Grand Prix on the 2012 calendar.