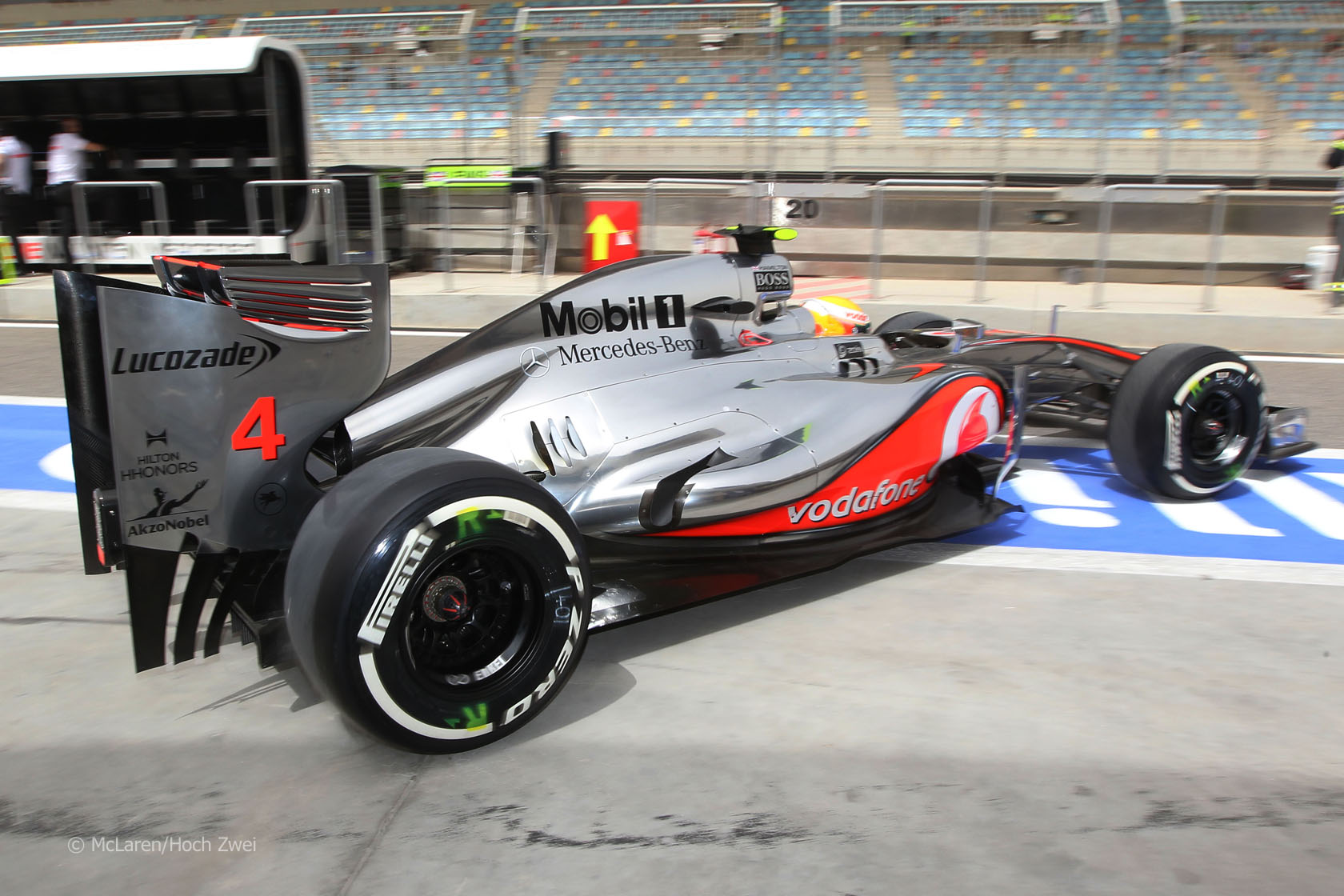 McLaren’s Lewis Hamilton has set the early pace in first practice ahead of this weekend’s Bahrain Grand Prix.

Hamilton completed only 11 laps of the Bahrain International Circuit, the fewest of anyone apart from former team mate Heikki Kovalainen in the Caterham.

Red Bull’s Sebastian Vettel was second fastest, three tenths slower than Hamilton, while Paul di Resta was third fastest in his Force India after being the only driver to set his personal best with the quicker Soft compound.

Chinese Grand Prix winner Nico Rosberg was fourth fastest, followed by Jenson Button, Nico H?â??lkenberg, Michael Schumacher and Mark Webber – who were all within a second of Hamilton’s time.

Ferrari will be hoping to find more speed from the F2012 over the course of the weekend, as Malaysian GP winner Fernando Alonso was almost two seconds off the ultimate pace in 13th after suffering from visible oversteer.

As to be expected, it was a hot and dusty start to the weekend with air temperature reaching?é?á 28?é??C and track temperature even warmer at 38?é??C.

The sandy surface meant that there was little activity at the start of the session, outside of the usual installation laps, with the bigger teams happy to wait until the track surface had been cleaned by other cars before venturing out onto the circuit.

The Force India team of Nico H?â??lkenberg and Paul di Resta were the first drivers to set representative times, both posting 1’35s on the harder Medium compound.

That was soon bettered by the Lotus pair of Romain Grosjean and Kimi Raikkonen, who lowered the benchmark to the high 1’34s.

With just over half of the session to go, the front runners began to leave the pit lane. Sebastian Vettel was the first to break the 1’34 barrier with a 1’33.877, before Lewis Hamilton bettered the reigning world champion by three tenths. That proved to be the fastest lap of the session.

In the final ten minutes, Force India took the decision to run both their cars on the Soft Pirelli compound, with di Resta setting the third fastest time with a 1’34.150.

The 90?é?? left-hander of Turn 10 proved tricky for some drivers in the opening session. Grosjean, Sauber’s Kamui Kobayashi, Mark Webber and the Mercedes pair of Rosberg and Schumacher all locking up into the difficult braking zone.

Team radio suggested that di Resta was suffering from an intermittent KERS problem during the session, while Timo Glock had a brief spin at Turn 1 in his Marussia near the end of the session.

21 comments on “Hamilton quickest in FP1 despite running fewest laps”