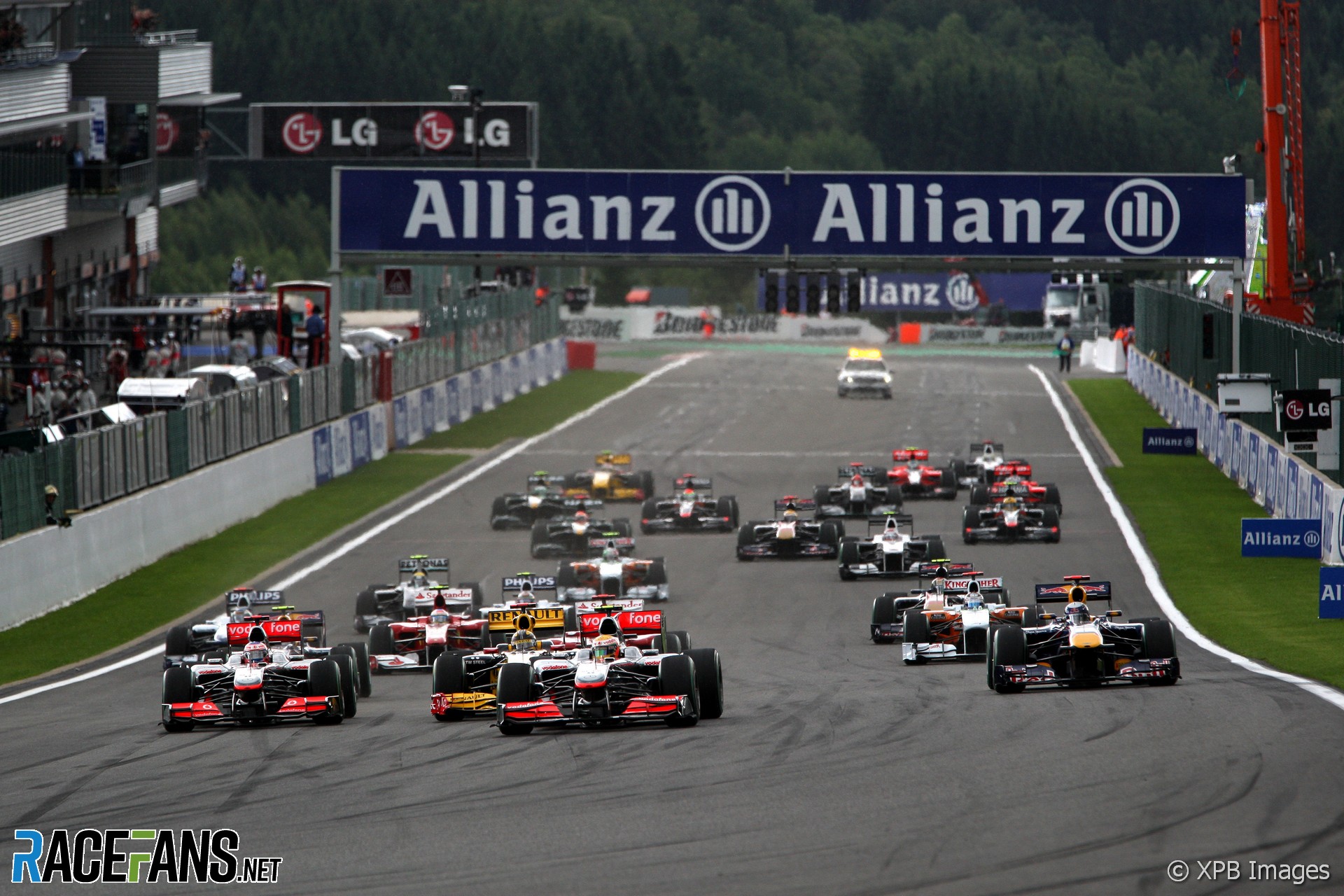 Lewis Hamilton won his third race of the year in Spa to take back the lead of the drivers’ championship.

He passed Mark Webber at the start and clung on to win as a series of showers hit the track causing an action-packed race.

They were the only two of the top five championship runners to score points as Fernando Alonso, Sebastian Vettel and Jenson Button all hit trouble

Barrichello crashes out of 300th race

Having started from pole position Webber was down to sixth by the first corner, as he bogged down badly. Hamilton seized the lead followed by Robert Kubica and Button.

But within a few moments the first of the rain showers had hit the tracks. It wasn’t very heavy, but enough to make the braking zone for the chicane treacherous. Several cars failed to get around it including Hamilton and Button, who was trying to pass Kubica.

Rubens Barrichello also got it wrong and crashed heavily into Fernando Alonso’s Ferrari. The impact was enough to tear a wheel off the Williams, ending Barrichello’s 300th race, but Alonso astonishingly was able to keep going.

That brought the safety car out, but not before Button had taken advantage of a mistake by Kubica at the top of Eau Rouge to claim second. Vettel almost followed him through but had to take to the grass to avoid the Renault.

Hamilton stayed ahead of Button at the restart while Vettel moved ahead of Kubica. The Red Bull driver now set about attacking Button, whose McLaren had a damaged front wing.

Hamilton had stretched his lead to ten seconds by the time the rain returned and Vettel began pursuing Button more aggressively. On lap 16 Vettel tried to pass Button at the chicane, lost control of his car and ploughed into the side of the McLaren.

Steam billowed from the side of the MP4-25, indicating it was terminally damaged. But Vettel was able to continue after a stop in the pits for a new front wing. Meanwhile Kubica moved up to second ahead of Webber.

As another shower passed over the track teams turned their attention to making their mandatory dry-tyre pit stops. Adrian Sutil came in early to ensure he stayed ahead of Alonso.

The Ferrari driver had already been in after his collision to try intermediate tyres before switching back to the hard compound. He picked off the new teams’ cars and then spent several laps trying to get past Liuzzi, who he eventually edged aside at the chicane for 13th place.

After Sutil pitted the others began to react. First Webber, then Felipe Massa and Kubica together on the next lap. Webber fell short of getting ahead of Kubica with his pit stop, trying to slipstream by at Kemmel but unable to get by.

Hamilton finally came in on lap 24 and got away again still in the lead. But it wouldn’t be his last stop.

The biggest shower of the race arrived with around ten laps to go. As before Hamilton and the rest tried to tough it out on slicks to begin with. Others gambled: Timo Glock switched to full wet tyres right away, but it never got quite wet enough for that.

Hamilton, Kubica, Webber and Massa came by the pits still on their slicks as the rain hammered down, but the cars further behind them had seen enough and all began to peel in, most for intermediates.

Hamilton found out why at Rivage, as he understeered off through the gravel. He gave the barrier the merest of kisses and managed to re-join the circuit. But his lead had now been slashed.

This time the lead quartet all pitted. Kubica failed to stop his R30 on his marks and knocked several of his pit crew over, and the time lost allowed Webber by into second place.

By now Alonso had made it up to eighth by Kamui Kobayashi. But as he came out of turn seven on lap 37 he ran too high on the kerb and spun into the barrier.

This finally brought the apparently indestructible Ferrari to a halt and the safety car was summoned again. At this point the rain was falling most heavily, potentially robbing the drivers who’d tried full wets of their best chance to make up places.

The race re-started with four laps to go and Hamilton held his lead over Webber and Kubica to the flag – the McLaren driver finally claiming the win that was taken from him two years earlier. Webber was the only other driver in the top five of the championship to score points.

Massa had a quiet run to fourth, with Adrian Sutil less than a second behind him at the flag.

Nico Rosberg took sixth ahead of Michael Schumacher, the pair swapping places twice during the race. Schumacher passed Rosberg – and gave his front wing a knock – after his team mate was taken by Vitaly Petrov. But Rosberg fought back later in the race, edging his team mate aside at Les Combes.

Petrov came home ninth behind Kobayashi – a useful recovery having started 23rd. Jaime Alguersuari claimed the final point for tenth but the stewards are investigating whether he gained an advantage by cutting the chicane late in the race while battling with Liuzzi.

The Force India driver was 11th ahead of Pedro de la Rosa, Sebastien Buemi and Nico Hulkenberg who spun late in the race on wet tyres.

Vettel ended the race out of the points in 15th. Liuzzi made contact with his left-rear tyre after Vettel passed him at the chicane, leaving Vettel with a puncture which he had to drag around an entire lap. An extra stop for a second set of full wet tyres meant he made a total of five trips to the pit lane, including his drive-through penalty for hitting Button.