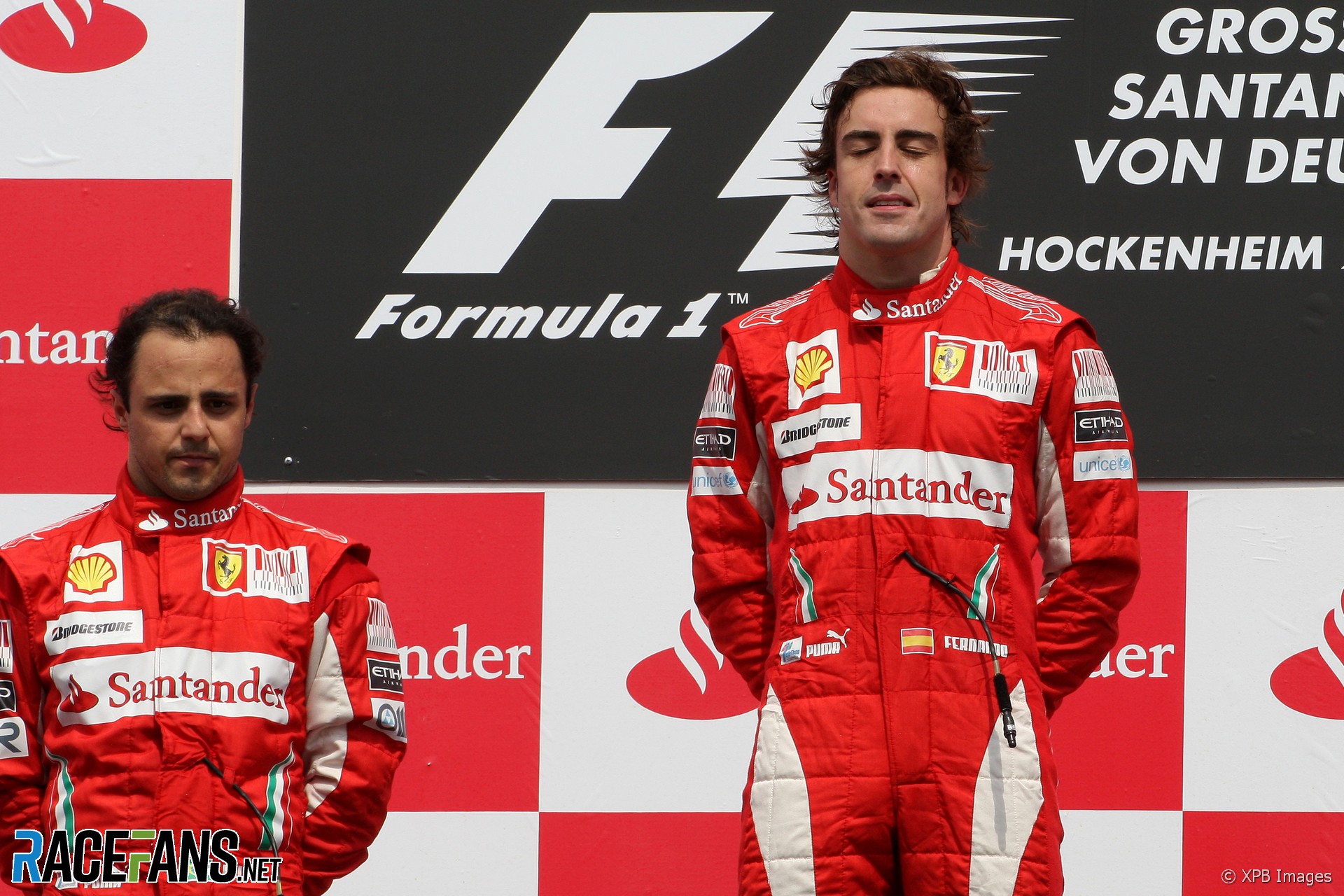 Fernando Alonso claimed his second win of 2010 in the German Grand Prix – but only after team mate Felipe Massa was ordered to give him the win.

The pair took the lead at the start as both overtook Sebastian Vettel. But Vettel’s attempts to keep Alonso behind let Massa through into the lead ahead of his team mate.

Pinched between the Ferraris, Vettel slowed and held up Jenson Button. That allowed the McLaren driver’s team mate to pass him as well as Mark Webber.

Vettel was the first driver to pit, his team smartly taking advantage of a small gap in the traffic behind.

Alonso reacted, pitting before Massa, but after his team mate pitted Alonso was still behind. Lewis Hamilton came in too and was briefly stuck behind Robert Kubica when he came back out.

But Mark Webber came off worst in the first round of pit stops, ultimately losing fifth place to Jenson Button. Button stayed out late and came close to getting ahead of Hamilton as well as Webber.

That left the Ferraris first and second, with Felipe Massa struggling to begin with after he switched to hard tyres.

At first it looked as though Alonso might be able to pass his team mate. He made a concerted effort when when was briefly held up behind Bruno Senna but Massa held the inside line for the hairpin and Alonso’s attempt to pass failed.

After that Massa began to pull away, building up a gap of over three seconds over his team mate. Later Alonso began to bring the gap down again and came within range as Massa hit more traffic.

It was at this point that Rob Smedley got on the radio to Massa with a message that has already become infamous. It was clearly a coded instruction to Massa telling him to let Alonso by.

Later Ferrari’s press officer Luca Colajanni defended the decision saying the team were concerned about the threat of third-placed Vettel:

If Felipe would have struggled more Vettel could have joined Fernando and that could have been a danger for the team.

When you are on the pit wall you have to think about all the potential scenarios. Vettel could have joined them and maybe in last ten laps of the race we could have been in trouble.
Luca Colajanni

However he denied Massa had been told to let Alonso by, saying:

We didn’t let Fernando pass. It was a driver decision. We inform the drivers about situation. We didn’t give any instruction at all to what they have to do. It was his own decision.
Luca Colajanni

Even when Massa slowed after being passed, Vettel wasn’t able to do anything about the Ferrari, and followed him home in third. But afterwards the stewards summoned Ferrari to explain themselves raising the possibility that Vettel may yet gain more places.

The McLaren drivers had a quiet race to fourth and fifth. They might have been pushed harder had Webber not developed a problem with high oil temperature, meaning he had to drop back from them.

Kubica took seventh ahead of the Mercedes duo, Nico Rosberg leading home Michael Schumacher after getting past him via the pit stops. Vitaly Petrov claimed the final point ahead of Kamui Koabayashi’s Sauber.

The two Williams drivers fell out of the points having started in the top ten and came home 12th and 13th.

Pedro de la Rosa ran a long first stint on the hard tyres but ultimately finished where he started in 14th.

The two Force Indias finished 16th and 17th behind Jaime Alguersuari after a terrible race for the team. Both cars were in for repairs at the end of the first lap.

The only two drivers of the new teams to finish were Timo Glock and Bruno Senna.

Alonso’s win means he is still fifth in the drivers championship but is now within 13 points of the Red Bull duo – assuming the stewards allow him to keep his victory.

275 comments on ““Fernando is faster than you”: Controversy as Alonso wins manipulated race”