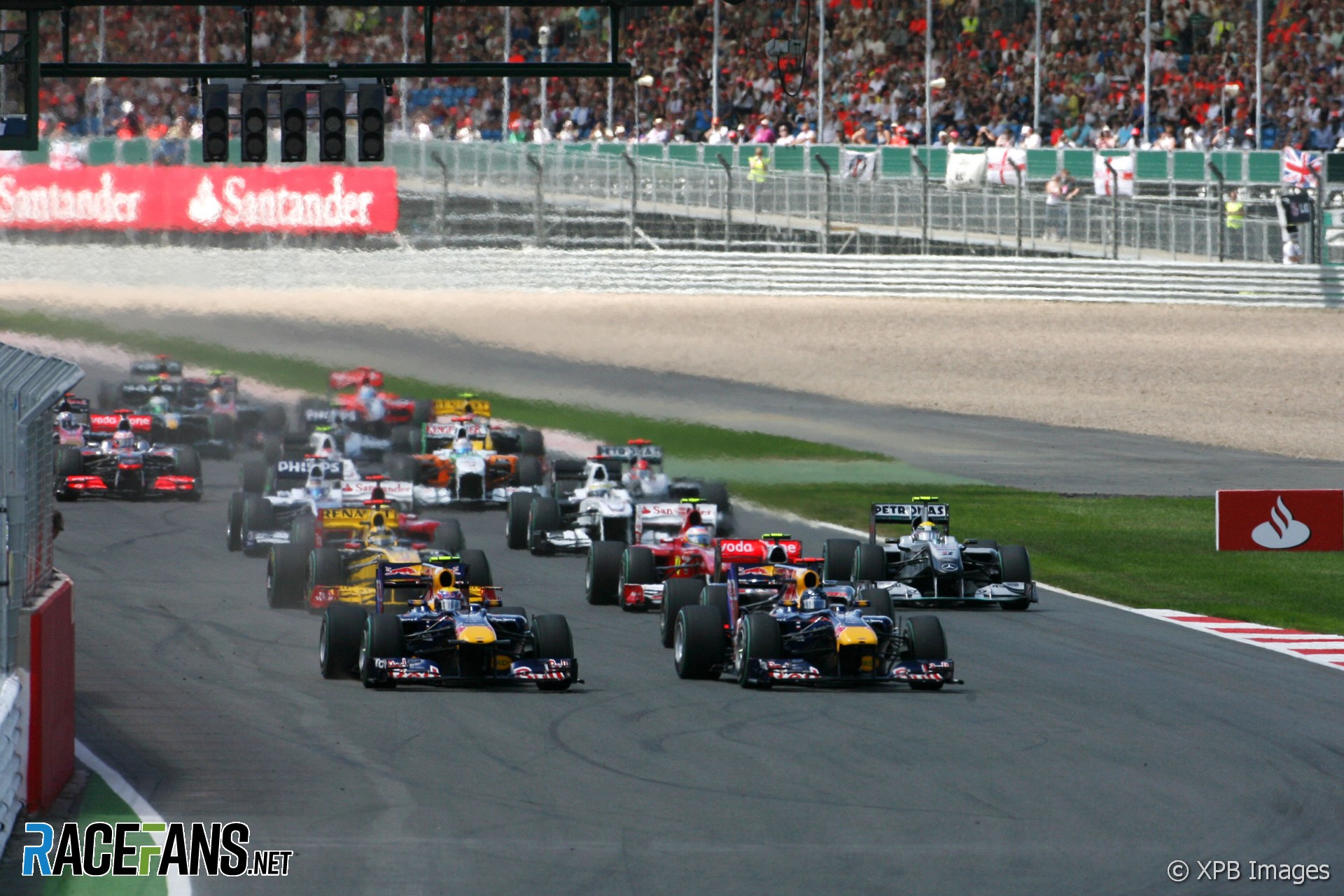 Lewis Hamilton capitalised on Vettel’s problems to take second place and hold on to the lead of the championship.

And Nico Rosberg held off Jenson Button to claim the final podium place for Mercedes.

Vettel’s race was ruined within a few metres of the race starting. Webber dived past his team mate and Hamilton followed him through to take second.

The McLaren driver made contact with Vettel’s car, which seemed to cause a right-rear puncture on the RB6 – though it could have been a consequence of Vettel’s trip across the run-off on the outside of Copse.

Vettel limped into the pits at the end of lap one, not long after Felipe Massa who’d suffered a puncture of his own having made contact with his team mate.

Webber and Hamilton ended lap one first and second and would ultimately finish in those positions, Hamilton admitting afterwards he didn’t have the pace to challenge the Red Bull.

Robert Kubica took up third with Nico Rosberg and Fernando Alonso in his wheel tracks. Alonso was the first of the three to pit, Rosberg delaying his stop and able to jump ahead of Kubica by doing so.

Alonso was climbing all over the back of the Renault driver and drew alongside on the outside as the pair headed to Club. He squeezed past Kubica but cut across the corner by doing so.

Renault appealed and Alonso had just been told to hand the position back when Kubica slowed and pulled into the pits to retire. Shortly afterwards the stewards announced Alonso would have to serve a drive-through penalty.

It got worse for Alonso moments later when Pedro de la Rosa’s Sauber began shedding bodywork on the track. With shards of carbon fibre littering the straight the safety car was summoned. This was a disaster for Ferrari, as Alonso now had to take his penalty after the field had bunched up.

After the safety car Rosberg held third ahead of Jenson Button. The McLaren driver gained six places at the start and then made his pit stop very late. That promoted him to sixth, after which he gained places thanks to Alonso’s penalty and a late pit stop for Nico Hulkenberg.

The safety car gave Vettel the possibility of points and he picked off several cars in the final laps. The likes of Vitaly Petrov, Hulkenberg and Michael Schumacher succumbed with little difficulty, but it took until the penultimate lap for Vettel to find a way past Sutil.

After several attempts to pass on the way out of the new Abbey and Farm corners – one of which resulted in Vettel running through the dirt – Vettel finally muscled his way past into the slow Loop corner. That left him seventh, with no time left to catch Rubens Barrichello or Kamui Kobayashi.

Schumacher and Hulkenberg rounded out the top ten, the latter stopping on his return to the pits. Vitantonio Liuzzi was 11th – he was passed by Alonso but the pair made contact, giving the Ferrari driver a puncture which compounded his misery. A late change for fresh tyres at least allowed him to claim fastest lap.

After the events of yesterday, when Christian Horner had order that the only remaining example of a new front wing to be taken off Webber’s car and put on Vettel’s, Webber had a clear message for the team after taking the chequered flag.

“Not bad for a number two,” he told them.