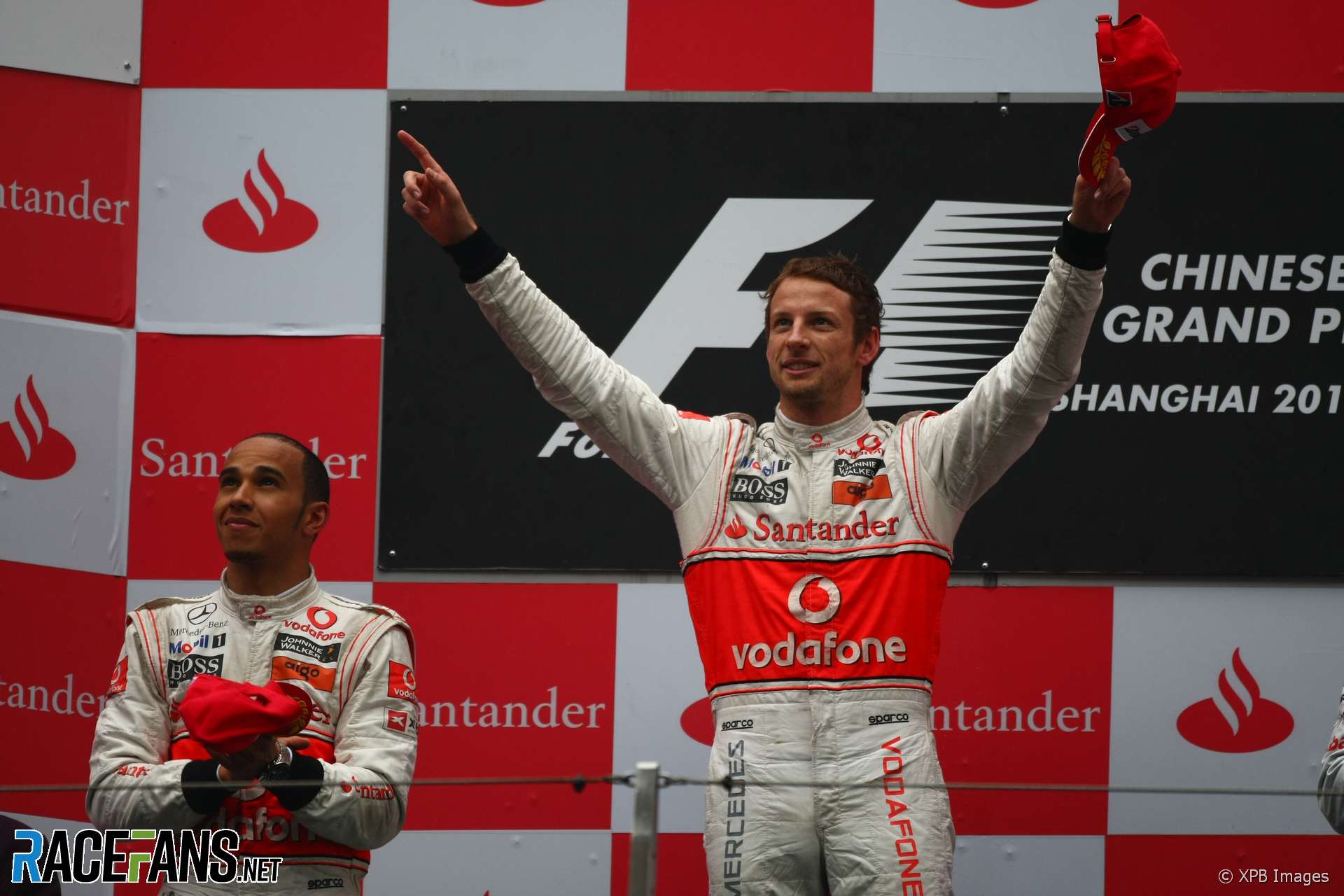 Jenson Button scored his second win of 2010 in a rain-hit Chinese Grand Prix.

Button hit the front after wisely choosing not to make an early switch to intermediate tyres – a decision which cost several of his rivals dearly.

Despite making an early change to intermediate tyres Lewis Hamilton fought back to finish second and was closing in on Button at the chequered flag.

Nico Rosberg finished third having led in the early stages before being passed by Button. Hamilton later passed him via the pits, but Fernando Alonso was unable to overhaul the Mercedes driver in the closing stages and finished fourth.

Alonso might have finished higher however, had he not been handed a drive-through penalty for jumping the start. His early getaway initially put him in the lead ahead of the Red Bulls.

Vettel was passed by Mark Webber at the start and both lost ground by making the early change to intermediate tyres which, like several other drivers, they then had to correct with another stop to change back to slicks.

He made quick progress through the field aided, like the other drivers who pitted early, by a safety car period to recover debris from Jaime Alguersuari’s car.

Vettel was briefly delayed by Adrian Sutil which allowed the recovering Hamilton past. Hamilton and Vettel had already had an encounter in the pit lane.

Vitaly Petrov scored his first F1 points with seventh despite a spin. The Renault driver took care of his tyres at the end of the race and passed Michael Schumacher in the closing stages, plus Webber who was struggling for grip at the end.

Felipe Massa also got past Schumacher to finish ninth, while the Mercedes driver ended the race in tenth.

Sutil might have got by Schumacher for the final point had the race gone on for another lap, but the Force India driver ended the day without a point.

Rubens Barrichello took 12th ahead of Alguersuari, who lost several places towards the end of the race.

Heikki Kovalainen became the first driver for a new team to beat a driver from the established teams. It helped that he made only two pits stops while Nico Hulkenberg came in six times.

Behind them were the two HRTs of Bruno Senna and Karun Chandhok, the latter suffering a spin in the wet conditions.

It was another double-DNF for Virgin and Sauber. The latter lost Kamui Kobayashi in a first-lap collision which, for the second time this year, also involved Sebastien Buemi. The pair were hit by Vitantonio Liuzzi’s out-of-control Force India.