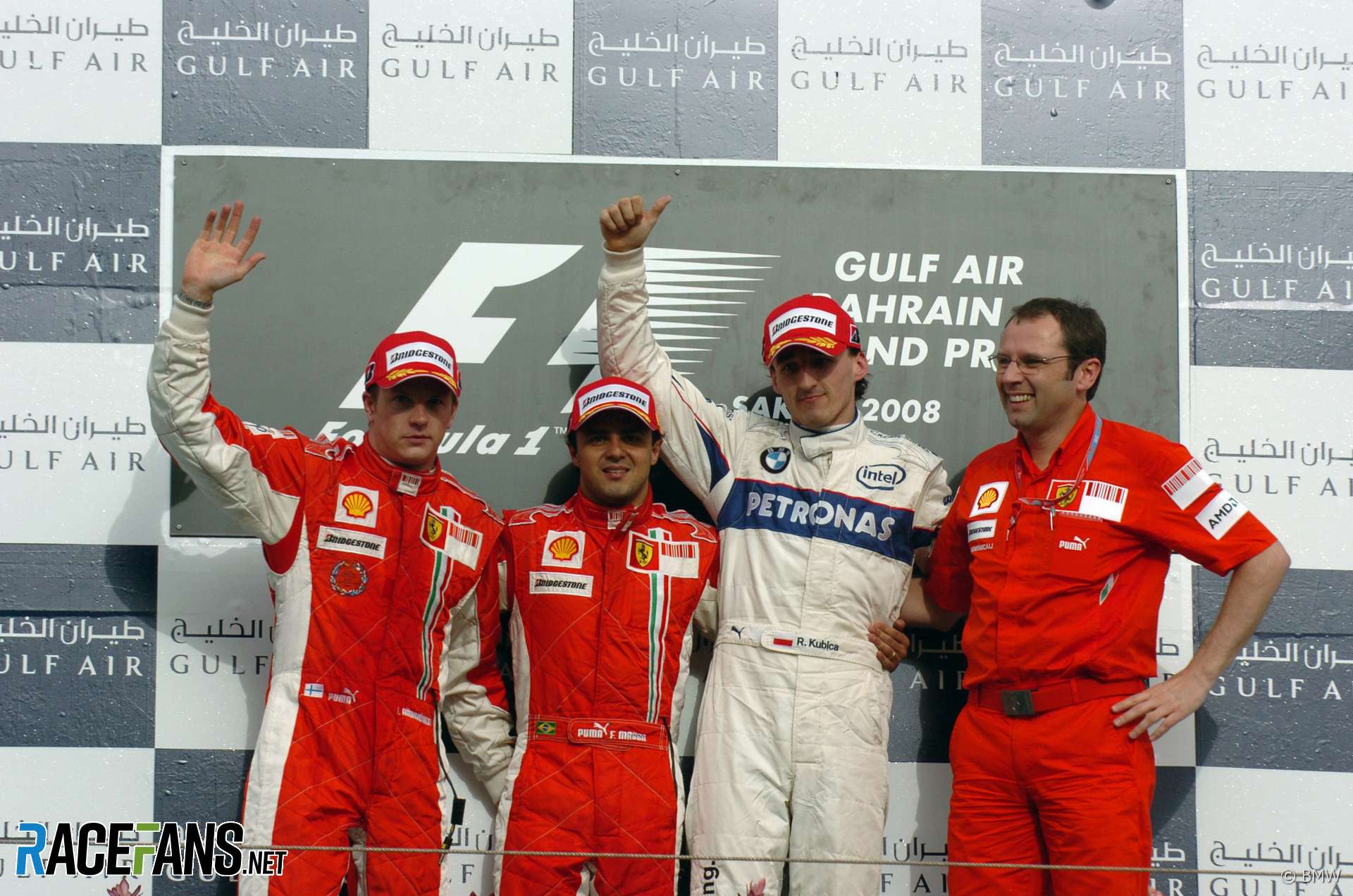 Ferrari made it look easy in the Bahrain Grand Prix as Lewis Hamilton’s bid for victory self-destructed once again and the speed of the BMWs in qualifying was not matched by their race pace.

It left Felipe Massa to take a straightforward win from Kimi Raikkonen, the world champion unable to reproduce the form we saw in Malaysia.

The prospects of a three-way tussle for the lead vanished at the start as Hamilton struggled to get his McLaren off the line – team mate Heikki Kovalainen swerving to avoid him.

That handed the initiative to Kimi Raikkonen, who seized third from Kovalainen. It soon became second as it took only two laps for Raikkonen to find a way past Kubica.

Sebastian Vettel made it no further than lap four when contact with another car – he did not know which one – forced him out. Jenson Button and David Coulthard came limping around to the pits for new tyres after picking up punctures. A third Briton came into the pits on the next lap – Hamilton – following a collision with Fernando Alonso that became an instant talking point. Having fallen to ninth, Hamilton was lining Alonso up for a pass between turns three and four when the McLaren hit the rear of the Renault, tearing off his front wing and take a chunk out of Alonso’s rear wing. (See video of the crash)

Hamilton had a new wing fitted but his car had clearly suffered other damage and he made up little ground over the rest of the race.

Massa assumed a four second lead over Raikkonen and although that changed a little as the pair swapped fastest lap times, it never really looked like become a serious battle for the lead. Contrary to expectations, Massa pitted later than Raikkonen, and appeared to have a few tenths of a second advantage over his team mate all race long.

Kubica fell to third ahead of Nick Heidfeld and Kovalainen, followed by Jarno Trulli, Nico Rosberg and Mark Webber. Depressingly, 56 laps later all that changed in the top eight was Webber moving past Rosberg, apart from some inconsequential shuffling of the pack during the pit stops.

Nelson Piquet Jnr spun early on but recovered to over take Sebastien Bourdais on lap 11. Piquet’s gearbox wouldn’t last, however, forcing him out on lap 40, and meaning he will probably have to take a grid penalty at the next race.

The only other retirement was Button, who managed to collide with Coulthard as the pair tried to make up for lost time. Afterwards he criticised Coulthard for moving across on him in the braking zone. Button took avoiding action but ended up hitting the Red Bull.

Timo Glock got ahead of Alonso around the second pit stops and held the Renault driver back to claim ninth – but almost half a minute behind team mate Trulli.

Rubens Barrichello, 11th, was the last driver on the lead lap but Giancarlo Fisichella’s Force India team were pleased with his 12th ahead of the recovering Hamilton.

Kazuki Nakajima had a quit run to 14th ahead of Bourdais, followed by the Super Aguris of Anthony Davidson and Takuma Sato. Coulthard was 18th and Adrian Sutil a twice-lapped 19th. Massa only had a five second advantage of Robert Kubica’s BMW at the end of the race but it looked like Ferrari could have stretched the gap quite easily had they chosen to.

Raikkonen has moved into the lead in the championship standings with Heidfeld taking second – and BMW nosing ahead by a point in the constructors’ table.

But with a three-week break until the next race it looks as though Ferrari have the initiative and BMW – not McLaren – are doing the chasing. Next stop Barcelona.