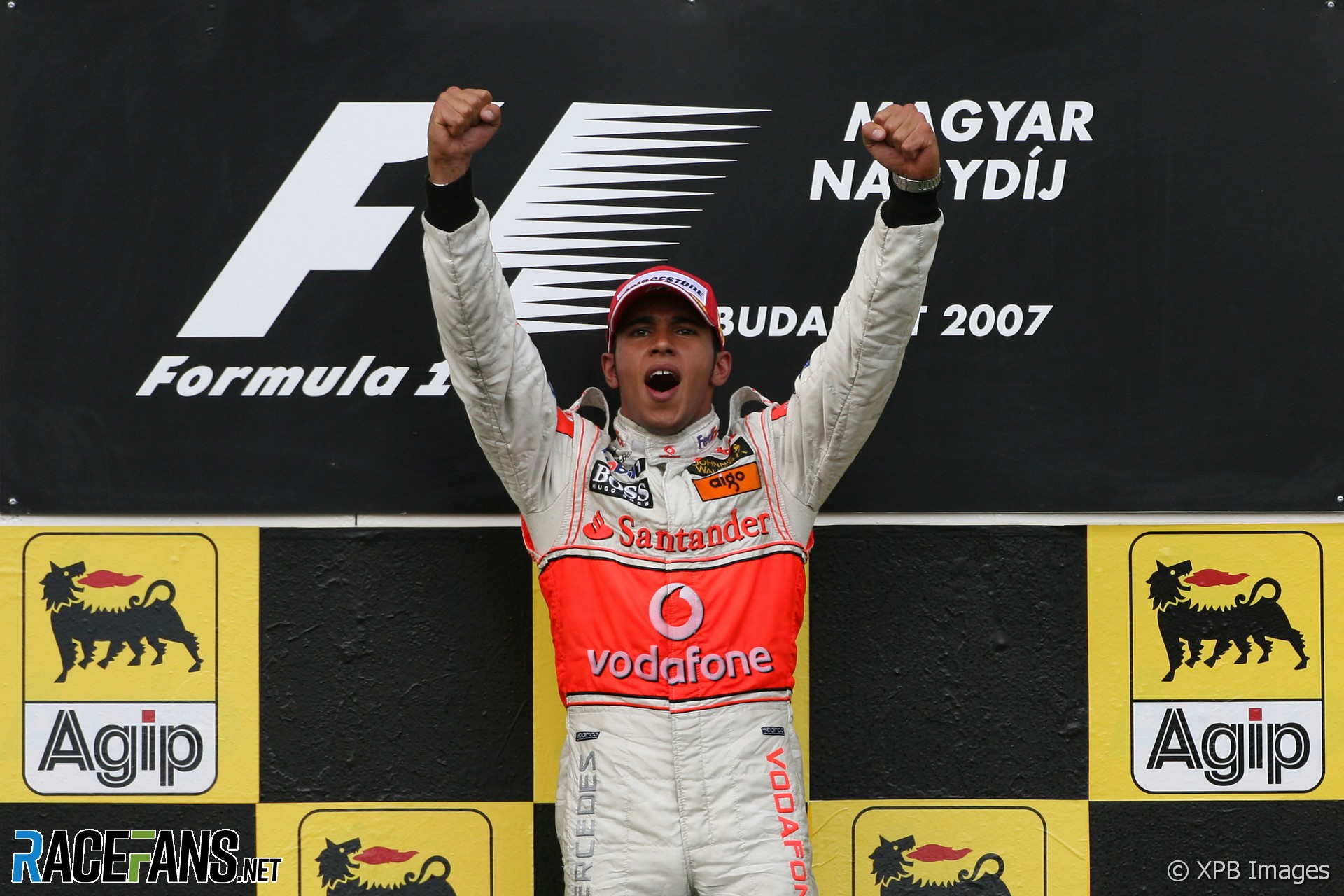 Lewis Hamilton won from pole position in the Hungarian Grand Prix – but it wasn’t the cruise to the flag many people expected. Kimi Raikkonen chased him around every lap of the Hungaroring.

Fernando Alonso failed to make it onto the podium and lost more precious ground to his team mate after another controversial weekend for his team – and the sport.

As ever the left hand side of the Hungaroring grid was the place to be. Lewis Hamilton got off to a flyer and Kimi Raikkonen followed him from third to pass Nick Heidfeld easily.

Alonso learned all about how unfavourable the right hand side of the grid was as he slipped back at the start. To make matter worse, Robert Kubica passed him at turn four and then Alonso ran wide at the final turn, letting Mark Webber past.

That left Hamilton leading Raikkonen and Heidfeld with Nico Rosberg fourth ahead of Ralf Schumacher, then Kubica, Webber and Alonso fending off Heikki Kovalainen.

Alonso quickly got down to business and picked off Webber and Kubica into turn one on laps three and four. But he couldn’t do the same with Schumacher, and held position just under a second behind the Toyota.

After qualifying 14th Felipe Massa had filled his Ferrari to the brim with fuel in the hope of pitting as late as possible. But it left him a sitting duck at the start, with Takuma Sato picking him off at turn four and relegating the Ferrari to 16th. By lap 13 he was 52.3s behind Hamilton.

Sakon Yamamoto’s return to F1 ended on lap six when he spun off, but the Spyker was recovered without the need for a safety car.

Hamilton scorched away in the early laps, pulling a 3.3s advantage over Raikkonen, while Heidfeld in third was another 3.2s behind. Raikkonen pegged the gap and even took a few tenths off Hamilton – but the McLaren driver hit back hard with a new fastest lap of 1’21.171 on lap 13, half a second than anything that had gone so far.

Hamilton had a 4.8s lead over Raikkonen on lap 15, with Alonso in sixth 23.8s behind and still staring at the back of Schumacher’s Toyota.

The first pit stops came on lap 18 as Heidfeld, Rosberg and Alonso all stopped. Alonso took a heavy load of fuel – clearly more than Schumacher took when he pitted on the following lap.

Hamilton and Raikkonen came in together on lap 20 and they too opted for heavier fuel loads. But Raikkonen was able to cope with the heavier load much better than Hamilton and had the gap down to just over a second.

Massa had been 61s behind when he finally made his first pit stop, and came out of the pits right in front of the battle for lead. Raikkonen was piling on the pressure – now just 0.8s behind Hamilton.

But concerns that Massa might delay Hamilton were quashed as the Ferrari began to pull away from the leader. Oddly, the stewards then decreed that he should let the leaders past, which he did with grace and losing even more time.

Alonso’s race was being ruined by his inability to get past Schumacher. On lap 42 Heidfeld made his stop from third and resumed ahead of the Toyota. That promoted Kubica to third – Rosberg having made his second stop very early on lap 33.

The punishing Hungaroring circuit began to tease out the mechanical failures. Jenson Button ground to a halt on the inside of turn 12 on lap 35, and Vitantonio Liuzzi pulled into his garage seven laps later.

Anthony Davidson’s retirement owed nothing to car failure. Giancarlo Fisichella pulled out of the pits alongside him but rudely whacked the Super Aguri on the exit of turn one, breaking his suspension, and causing him to spin out.

As the leaders approached their final pit stop Hamilton suddenly picked up the pace. He stretched the gap from 0.8s to 1.7s as Raikkonen pitted on lap 45. McLaren then gambled on keeping Hamilton out for an extra four laps, while the Englishman lapped within a tenth of a second of his fastest lap so far.

He pitted on lap ten and resumed with an extended lead of 4.4s. With both drivers now on the super soft tyres, Raikkonen set about cutting Hamilton’s lead to just half a second by lap 58

Meanwhile things were finally going Alonso’s way. Schumacher finally pitted on lap 47, and Heidfeld and Rosberg both made their third stops on lap 54. Kubica made his final stop two laps later, which left Heidfeld third ahead of Alonso, Kubica, Schumacher and Rosberg.

Now that he had the scent of a podium finish Alonso came to life, reeling Heidfeld in and sitting just half a second behind the BMW.

The battles for first and third were finely poised, with less than a second between the pairs of duellists – but no one was able to get close enough to try a pass. Alonso ran extremely wide at turn four, but where there once was gravel is now tarmac, and he lived to fight another day.

Hamilton had a 1.7s lead as the final lap began but still Raikkonen wouldn’t give up, setting a new fastest lap of 1’20.047 on the final tour.

But Hamilton took his third win of the season and he will have been doubly pleased that Heidfeld kept Alonso off the podium – because it would have been awkward, and because it denies Alonso another precious championship point.

Kubica finished fifth ahead of Schumacher with Rosberg seventh – Williams strangely having sacrificed their precious track position early in the race with a three-stop strategy.

Heikki Kovalainen claimed the final championship points – once again beating team mate Fisichella who was 12th. Between them were Webber, Jarno Trulli and David Coulthard.

A combination of a long first stint and a questionable blue-flagging left Massa an anonymous 13th, sandwiched between Fisichella and Alexander Wurz – the Austrian clearly out-shined by team mate Rosberg.

On the podium, Hamilton looked jubilant before the crowd that had flooded onto the track, having extended his championship lead over Alonso to seven points. Raikkonen too has re-asserted his place as the pre-eminent Ferrari driver, now one point ahead of Massa.

But there was no McLaren representative to collect a constructors’ trophy, at the FIA’s instructions. Dark clouds still hang over McLaren, who now have two visits to the FIA Court of Appeal ahead of them.

Another strategic snoozer. The final laps were a sad indictment of how poor the quality of racing has gotten in Formula 1.