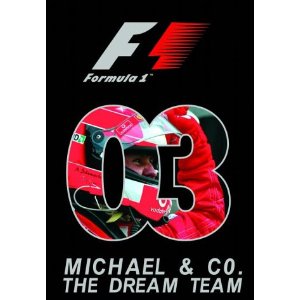 Although there are DVD reviews available for the 2000 and 2001 season, FOM took until 2003 to start putting their own DVD reviews out.

At least they chose a decent season to start with, and did it justice with this comprehensive 145-minute review.

It’s not flawless, though. The commentary in particular is a weak link: flat, un-engaging and, oddly, delivered in the present tense.

It’s also peppered with errors and noticeable oversights of detail – we are told that David Coulthard took his debut win at Australia in 1997 (it was Portugal, 1995).

When we are told that Olivier Panis struggled at the start of the Australian race on slick tyres, we are not told that one of the drivers who passed him, Juan Pablo Montoya, was also on dry-weather tyres.

And, inexplicably, the sound format is only mono – where’s the eardrum-hammering surround sound?

These niggling points aside, the quality of the footage and the professionalism with which it is assembled is mightily impressive and long overdue.

Unlike the earlier DVDs, you get a ‘full season’ option as well as individual races, but the multiple viewing angles for key moments are sadly lost.

But what’s important is that they’ve got almost all of the basics dead right with this DVD. Add in the fact that 2003 was a riveting season and you’ve got a top-notch package. Highly recommended.