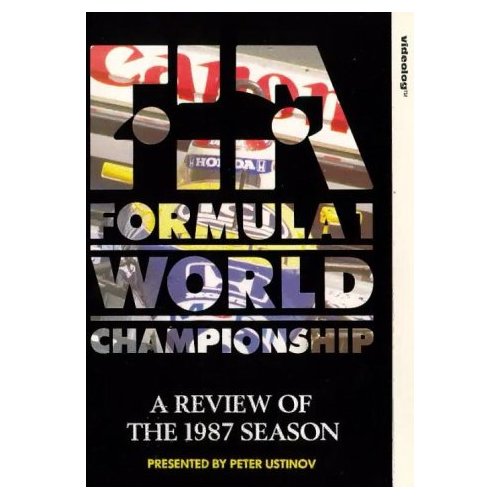 The 1987 season saw Nelson Piquet take his third title after a season-long battle with Williams team mate Nigel Mansell. The championship was decided when Mansell shunted in practice at Suzuka and injured his back.

The video highlights for the year are presented by the late Peter Ustinov and commentated on by Simon Taylor. Ustinov is entertainingly off-the-wall and Taylor is more engaging than he is in the 1981 review.

The film serves the season well from a historical perspective, charting the progress of the Jim Clark Cup drivers and Colin Chapman Cups (these were one-off championships for drivers and teams respectively with normally aspirated machines during the turbo heyday) and keeping an eye on major political developments and driver moves.

Not least of which being Honda’s defection from champions Williams to Lotus, who were never to win another race.

Williams’ domination of 1987 was such that the quality of the racing often suffered. This was emphatically not the case at Silverstone, which saw one of the great battles between Mansell and Piquet.

However, most of the major race (and pre-race) action is present, including even Stefan Johansson’s grisly accident with a deer in Austria. Johansson was fine, the deer was a write-off.

Best bit: At Silverstone, Mansell hauls in Piquet from half a minute back, and dupes him with a classic move at Stowe to take a thrilling win. The crowd go bananas.